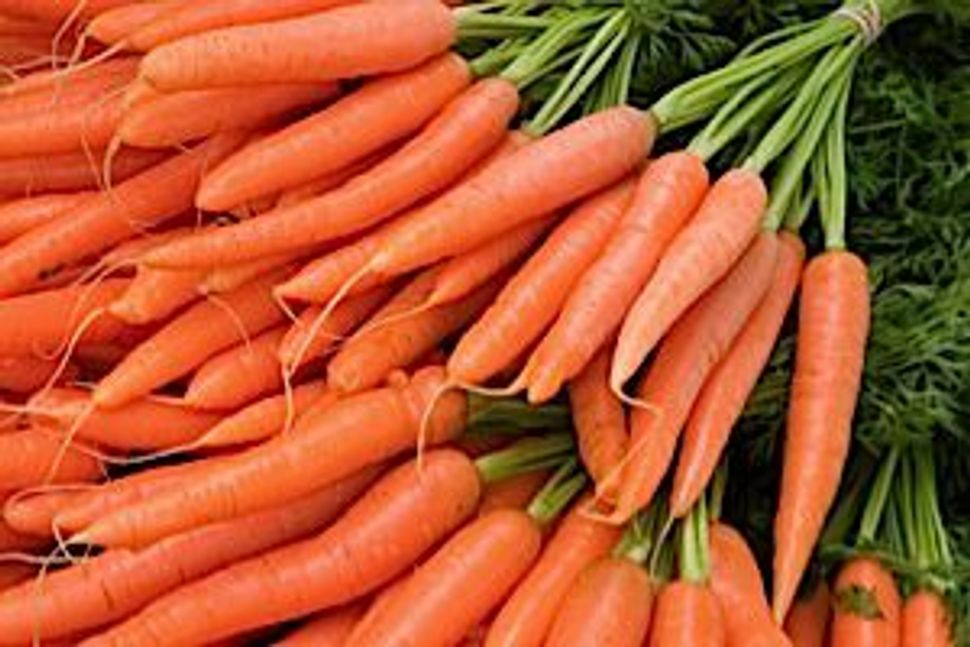 Myths, both ancient and modern, abound around the orange veggie — some say it improves your eye sight, others claimed it aided in contraception, some quibble over the fact that orange carrots were created by botanists working under the House of Orange in Holland, and finally, others claim that Jews are responsible for the first written carrot cake recipe in America. Like most good legends, there’s a grain of truth and a whole of hullabaloo in these myths. So here are the facts:

First of all, carrots, and not just the ones sitting at the bottom of your vegetable drawer, are really old. Fossils of wild carrot pollen stretch back 55-34 million years, according to botanical researchers John Stolarzyk and Jules Janick. Since then, carrots have transformed from wild inedible roots to the sweet orange vegetable we know today.

The ancient Romans used wild carrots and their seeds as an aphrodisiac and to stop the effects of poison, says Stolarzyk, who is the curator of the World Carrot Museum, a virtual based museum dedicated to the vegetable (how did we not know about this earlier?). And the first recognizable “domesticated” carrots sprouted in 5000 BCE in Afghanistan in shades of purple, red, yellow and white (but not orange) — similar to the rainbow varieties available at farmers markets today. Their popularity quickly spread and their seeds were traded to points east and west.

The carrot makes its debut in the Jewish community around the 11th century when it was noted in the writings of Persian rabbis, explains Gil Marks in the “Encyclopedia of Jewish Food.” By the 12th century, carrots were available in Spain, where Sephardic Jews encountered them. And as the vegetable spread north and east, Ashkenazi Jews got a taste of them in Poland by the 14th century. But, the carrots these ancestors were chomping on, weren’t as sweet as carrots today, and they weren’t orange.

For those advances (and tzimmes), we have 16th century Dutch botanists to thank. Legend — though, likely not fact — has it that the orange carrot was bred in honor of William of Orange, the Dutch king who fought for Holland’s independence from Spain. Whether the vegetable was in fact a “royal veggie” or not, the sweet flavor and orange color of the Dutch carrot stuck and its popularity spread.

When the new carrot breed arrived in Eastern Europe, Ashkenazi Jews dubbed it mehren/merren in Yiddish, a homonym of merin, the word for prosperity, as its sliced pieces looked like gold coins. The sweet vegetable supplanted turnips as one of the symbolic food of Rosh Hashanah, explains Marks. Cooks highlighted the carrot’s sweetness in mehren tzimmes, the carrot tzimmes that still appears on countless holiday and Shabbat tables.

While Jews didn’t bring the carrot to America (the pilgrims brought it in the early 1600s) Jewish cooks continued to develop recipes around the vegetable’s sweet flavor in their new home. According to Marks the first appearance of the term “carrot cake” in an American source came from “The Neighborhood Cook Book” by the council of Jewish Women, published in Portland, Oregon in 1912 — a pretty cool claim to fame!

That should be enough to make anyone else green (or we should we say orange?) with envy.

To celebrate our anniversary and Jews’ relationship with the carrot, we share with you the original Jewish carrot cake recipe, along with an updated version of the cake from Saveur. Here’s to a sweet new year!

Baker’s Note: Early recipes for the cake leave out the now signature cream cheese icing which lends the cake its sweet tang. That didn’t come until the 1960’s, so it is included in the latter recipe.

Carrot Cake
From the Neighborhood Cook Book by the council of Jewish Women, Portland, Oregon

One-half pound sugar, one-half pound almonds, blanched and chopped, one-half pound carrots, boiled only till they can be grated, juice and grated rind of one lemon, four eggs. Cream the yolks and sugar; whites beaten to snow, added last; add three or four bitter almonds; beat for one half hour before adding whites of eggs. Butter spring form and sprinkle with grated zweibach. Bake in a moderate oven one and one-quarter hours, till loosed from pan.

3) In a bowl, beat cream cheese and butter with a hand mixer until smooth. Add remaining vanilla and confectioners’ sugar; beat until fluffy. Spread icing over cake; refrigerate. Garnish with marzipan carrots, if using.