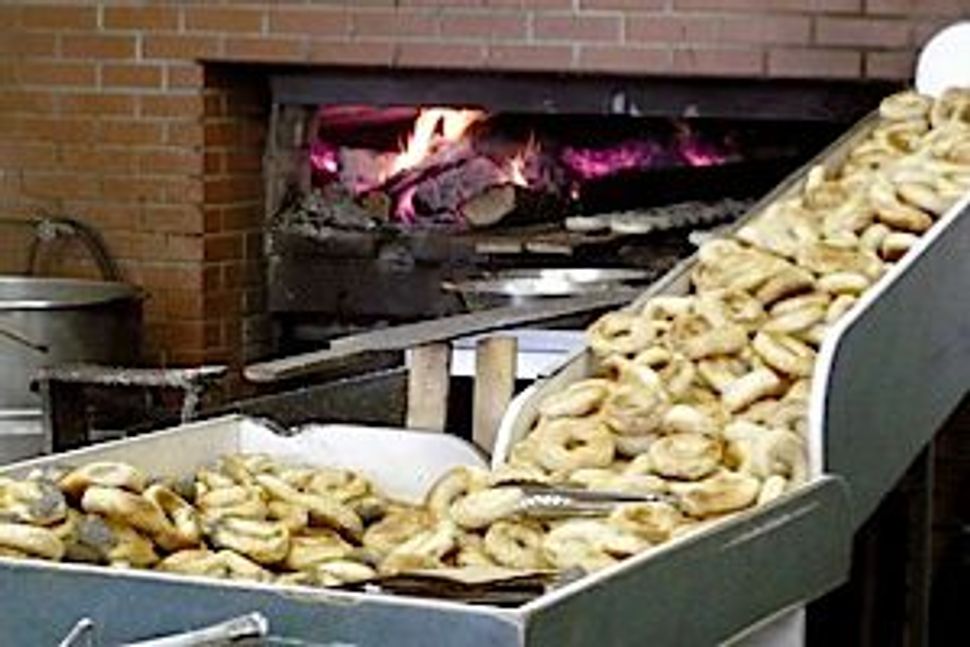 “My folks are from Montreal, so I always grew up with a sense of bagel superiority,” David Sax, Jewish food connoisseur and author of “Save the Deli,” told the Jew and the Carrot. He thinks a niche market for Montreal bagel has formed since word got out around the U.S. about them from ex-Montrealers and others who visited the French-speaking city, tasted the bagels there, and loved them.

There’s no mistaking a Montreal bagel for any other kind — they’re smaller, denser, sweeter and chewier than other bagels. Their signature sweetness derives from the fact that they do not contain salt, and they are traditionally boiled in honey-sweetened water. Another noticeable feature is that their holes are larger than those in New York bagels — or most other kinds of bagels for that matter.

Montreal bagels are artisanally made; they are hand rolled, boiled in copper vats and baked in wood burning ovens. Customers can see this baking technique in action at the most famous bagel bakeries in Montreal, St. Viateur and Fairmount. Fairmount owner, Irwin Shlafman, whose family has owned Fairmount since 1919, says his bagels are so popular that he regularly sends orders to other cities by overnight express and gets at least two orders from the States each day.

Shlafman said he has gotten quite a few calls from people who “want to be copycats” and open up Montreal-style bagel shops in other cities. He said he isn’t interested in getting involved with that. St. Viateur, on the other hand, was willing to let American chef Blake Joffe apprentice there and learn the Montreal bagel baking craft so that he could open Beauty’s Bagel Shop in Oakland, California. (Joffe named his business in homage to the landmark Beauty’s diner in Montreal, where you can get the “best bagels, lox, cream cheese with tomato and red onion in the world. Bar none,” according to Sax.)

Beauty’s Bagel is only a virtual shop at this point. Joffe and his partner Amy Remsen, hope to eventually be able to open up an actual brick and mortar location, but in the meantime they have worked out an agreement with a local pizza restaurant to bake their Montreal bagels in the restaurant’s ovens. Beauty’s supplies its bagels to Saul’s Deli in Berkeley and Wise Sons, a weekend pop-up deli in San Francisco. Joffe and Remsen also sell directly to customers at a local farmer’s market.

While Americans are only discovering Montreal bagels relatively recently, Torontonians have been able to enjoy them for years now. There are several Montreal bagel bakeries there, but the best, according to Sax, is The Bagel House, which has three locations in the city. The Bagel House was opened by Jessie Sahdra and Sat Chouhan, bakers with experience from the original bagel bakeries in Montreal.

Chouhan estimates that 80-90% of the customers at their Avenue Road location are Jewish, and that half of them are ex-Montrealers who need their regular Montreal bagel fix. “And we have customers who are visiting from L.A. or Chicago who buy 10-15 dozen to bring home with them,” he said.

In the town where Montreal bagels meet their toughest competition, New Yorkers can get them at Mile End Deli in Brooklyn, which brings them in from St. Viateur, or from the new B & B Empire in Brooklyn, which bakes their own Montreal-style bagels. Not everyone has welcomed them with open arms — or should we say mouths. The New York site Gothamist conducted an informal office taste test of Montreal bagels. “This is like a strange simulacrum of a bagel. Which makes sense because Canada is sort of a simulacrum of the United States,” was one of the snarky comments made.

Another debate between the cities is how a proper bagel should be eaten. Many Montreal bagel eaters, like Fairmount’s Shlafman, like to eat them as they are. For those who want to use them for sandwiches, there is the issue of getting used to the somewhat larger hole.

“Montreal bagels work less well as sandwich holders — for egg and tuna salads, for instance,” Sax admits. “Though the original bagels never were intended for this. If you want a sandwich, get a loaf of bread.”