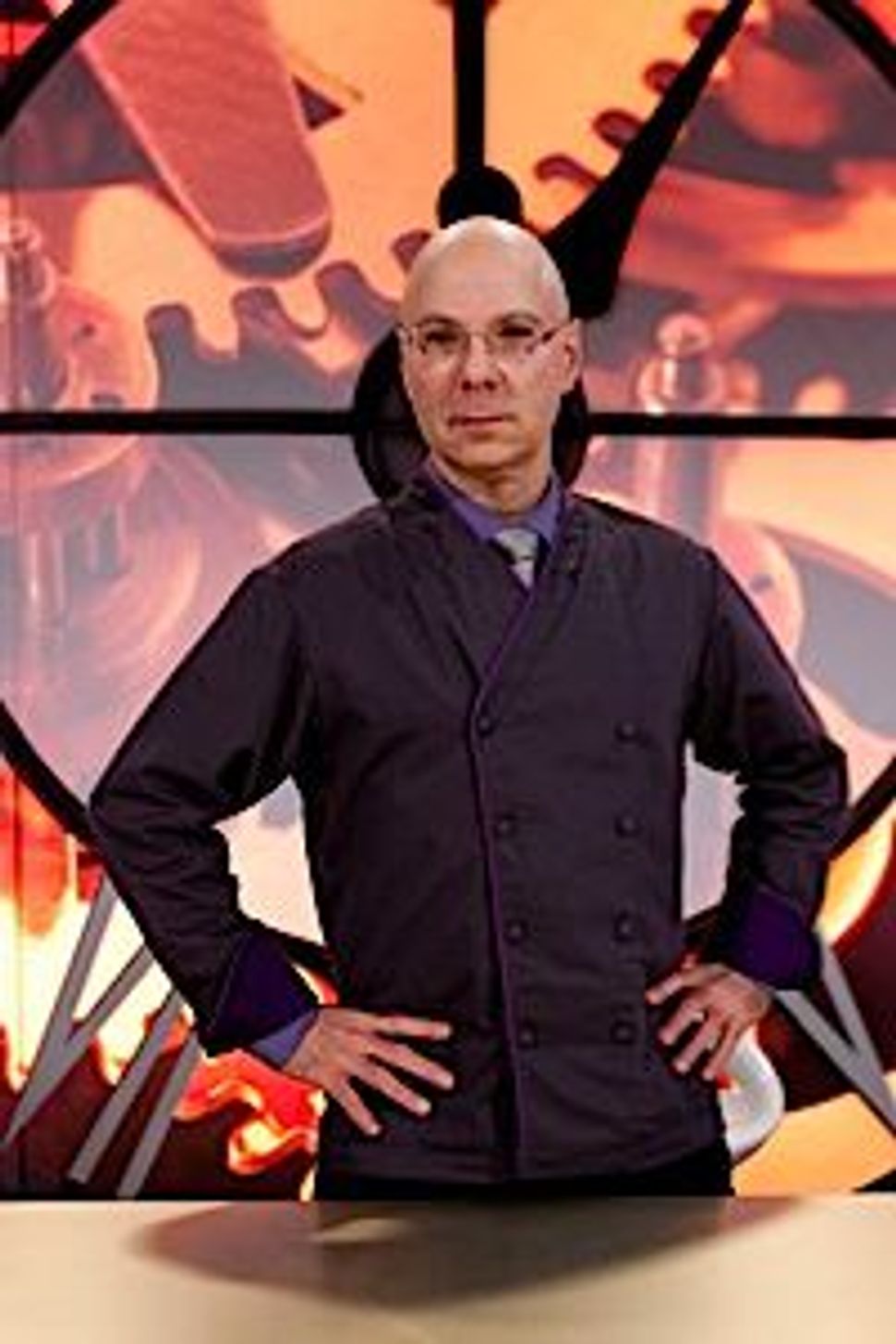 Image by Courtesy of Food Network

On Thursday, Ben-Israel will become better known to the rest of the country during the premiere of his Food Network competition show, “Sweet Genius.” On each episode, four pastry chefs will compete in an elimination challenge. Ben-Israel will decide the winner, who will take home $10,000, based on both taste and presentation.

We spoke to the Israeli sweet genius himself about his show, his confections and his road from IDF soldier to professional dancer to cake maker extraordinaire.

Lucy Cohen Blatter: What differentiates your show from other food competition shows on television right now?

Ron Ben-Israel: I don’t think anything like this has been done. One model for the show, though, is Chopped, and we work with the same people. But there’s no panel of judges on “Sweet Genius.” I invite the chefs to come to my kitchen.

The challenges are not just about being faced with unique and challenging ingredients, the other element is inspiration. I give them something to get their minds working and create an inspiration. I like to show people how they can interpret interesting ideas in chocolate, cake and ice cream.

So you’re the host and the sole judge?

Yes. The idea is to have everyone contained in the kitchen, and not distracted by a panel of judges and different hosts. The hardest challenge for me was to not jump in and show people what to do. I’d forget that it’s not my bakery sometime.

Every one who comes on is interesting — people from restaurants, hotels, resorts… some work for themselves. We give away $10,000 each episode, so they’re people who would likely put that into starting a business. And I’m encouraging of people who immigrate to this country to work, like me.

Paula Shoyer, author of “The Kosher Baker,” is a contestant on “Sweet Genius.” Did you specifically want to include someone with experience in kosher cooking?

Yes, but we try to include a variety of pastry chefs. One aspect of cooking, of course is kosher cooking. She did really well, though I can’t tell you what happened.

Any not-to-be-missed moments on “Sweet Genius?”

One of the most entertaining things to watch is how people redeem themselves. I’d be anxious about what they were doing, and then they’d turn it around.

Do the contestants know in advance what the challenges will be?

No. But it’s great. Mistakes can be wonderful.

Tell us a little bit about your background. You were born in Israel?

Yes. My mother was born in Vienna and was rescued from the ghetto by American volunteers … [and later] put on a boat to Israel. My father lost most of his family in the Holocaust. As a teenager he was in Auschwitz, and was released by American soldiers. They fell in love in Israel. They were both artists, and I was the first born. So no pressure there [laughs].

And you served in the Israeli army before becoming a dancer?

Yes. When I was in the army, a friend from school introduced me to ballet. I went to check it out so there I was, in my army uniform, with all the girls in tutus.

So it was a bit like Billy Elliot, huh?

Yep, exactly. Except I was 21 at the time. But I was just fascinated by it and I joined a dance company in Israel that was produced by the Rotschilds. We toured extensively.

I didn’t directly. I had to eventually retire from dancing, and I wanted to stay in America [where he had moved]. So I started doing temporary jobs. I always was comfortable in kitchens. People began asking me to make cakes for them. I was also designing some shop windows. One day, Martha Stewart walked by the window at Mikimoto on Fifth Avenue and saw the cakes I had done. She called me because she was starting a wedding magazine. She invited me over to her famous house for breakfast. I saw the hydrangeas she had there, and said I could do hydrangeas in sugar. And that was it.

Did you ever have any professional training?

No, I didn’t. When I started, there weren’t as many courses for cake-making. But now I teach at the French Culinary Institute, so I learn from my students.

You’ve made some incredible cakes. What are some of your proudest career moments?

It has a lot to do with the clients. The difference between a pastry chef in a restaurant and what I do, is that I get to meet every client. There was a wedding between a fireman and someone he rescued… sweet stories about high school sweethearts who married other people first, got divorced and then ended up getting married to each other. I think the oldest groom we had was 89 years old, and his wife wasn’t much younger.

The biggest cake we ever did was for the Plaza hotel’s 100th birthday. It was 12 feet tall and eight feet wide — it was a huge structure. The hotel was being renovated and restored, so we had to work with restorers and look at the photos and drawings, so that the cake would look like the vision of the hotel. We had to learn a lot about architecture.

What’s coming back to fashion is the Southern idea of a groom’s cake. We’ll often do the groom’s cake sometime the night before the wedding, or for brunch the following day. A lot of times they’ll look like cars, or have a sports team motif. Celebration cakes are big, too. It’s not just about wedding cakes.

Your company offers kosher cakes. Is it more challenging to make kosher and pareve cakes?

In New York, having kosher cakes became almost a necessity. Flavorwise, having to use margarine rather than butter is a challenge. But I do try to be as health as I can. I’ve started using rice, almond and soy milk instead of dairy.

Any tips on updating the traditional Rosh Hashana honey cake?

I love the traditional honey cake, but often it is too sweet for me. I add a few more grains of salt to the batter, and also like to intensify the flavors — I add a bit of dark coffee for some of the liquid, grated fresh ginger root.