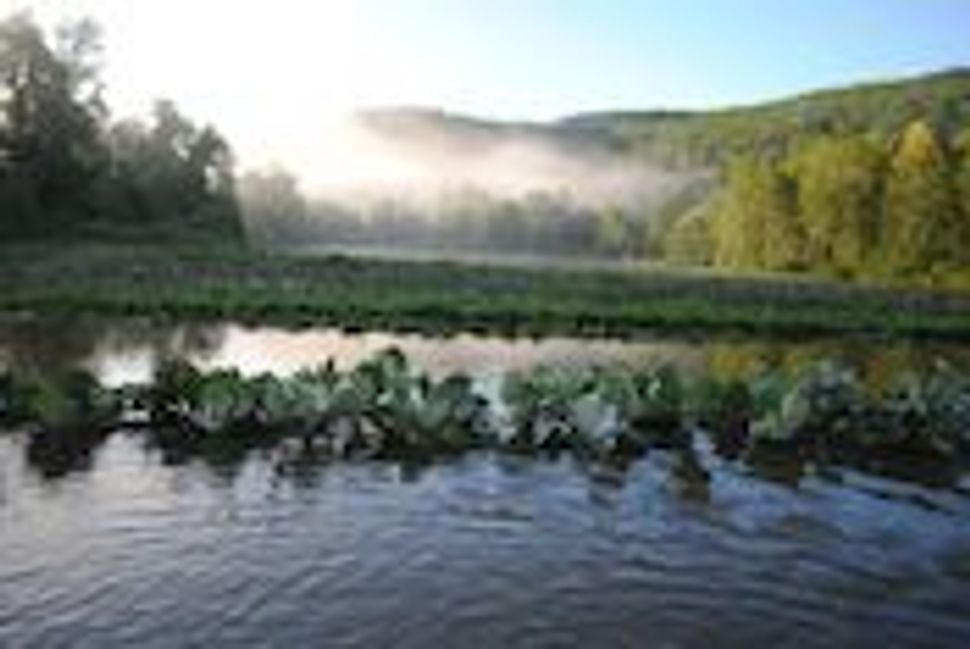 This year, the beginning of fall brought on the terrific force of Hurricane Irene and Tropical Storm Lee. Connecticut rainstorms usually bring about an inch of rain, but these storms together brought between 9 and 11.5 inches of rain. This massive amount of water caused our main field, the sadeh, to flood — not once, but twice. As these waters rushed over the rows of carefully tended vegetables, they wreaked havoc. Low-lying vegetables such as cabbages and carrots were drowned. Other crops were simply swept away. The winter squash, which had been gathering sugars to be as sweet as possible for harvest, floated in the floodwaters to the woods at the edges of the field. Because of possible contamination in the floodwaters, vegetables that remained after the waters receded have been deemed unsafe to eat. Topsoil — the fertile, soft soil that farmers spend almost as much time cultivating as they do vegetables — was completely washed from the field. The past seven years of composting and cover cropping was lost and will have to begin our next season on hard, compacted soil.

In the context of this flood damage, Rosh Hashanah is a completely new beginning for the farm. As we approach the New Year, Adamah fellows and staff are shifting their focus from the usual fall activities of harvesting and preserving to planting fast-growing cold hardy crops to make up for those lost in the flood. Salad greens (fans of cold weather) are getting more loving care than ever before, in the hopes that they will help bulk up CSA deliveries into the fall. Storage crops that were harvested before the flood, such as onions and potatoes, have become incredibly precious. Value-added products made from previous harvests, such as jams, pickles and sauerkraut, will be used to supplement the vegetables given out weekly to members of our Jewish Local Greens CSA.

Rosh Hashanah is a time for celebrating the year that is coming to completion while also contemplating events and changes that have taken place during that time. As people living closely with the land, we at Isabella Freedman can measure these changes in the passing of seasons, in the lifecycle of vegetables and fruits, in plantings and harvests. This Rosh Hashanah, as work continues to salvage and rebuild the remains of the fields after Hurricane Irene and Tropical Storm Lee, we will look back upon months of field work: seeding, transplanting, tending and harvesting. As the floodwaters recede, we are left with an increased appreciation for what remains and the opportunity to do it all again in the coming year.

At Isabella Freedman much of the produce grown on the farm is used in our retreat center kitchen. All summer long, retreat participants have enjoyed creative kosher cuisine that highlights our own vegetables. The winter squash that were rescued from the woods after the flood have been playing a starring role on our buffet. One of the favorite recipes to come out of the kitchen in the last month is winter squash and hot pepper jelly soup (recipe below). The recipe can be made with any type of winter squash and any pepper jelly, although our favorite is Adamah’s Bomb Jam.

1) Heat oil in a heavy bottomed pot. When oil is hot, add onions. Cook onions until edges are beginning to brown.

4) Bring the soup to a boil then reduce to a simmer. Cook until squash is tender.

5) Puree soup in batches in the blender until smooth. Return to pot.

6) Off the heat, stir in hot pepper jelly to taste.

Megan Jensen works at the Isabella Freedman Jewish Retreat Center as the Development Associate. When not in the office she can be found making jam, canning, milking Patches the cow, or enjoying the abundance of local foods in the Berkshires.