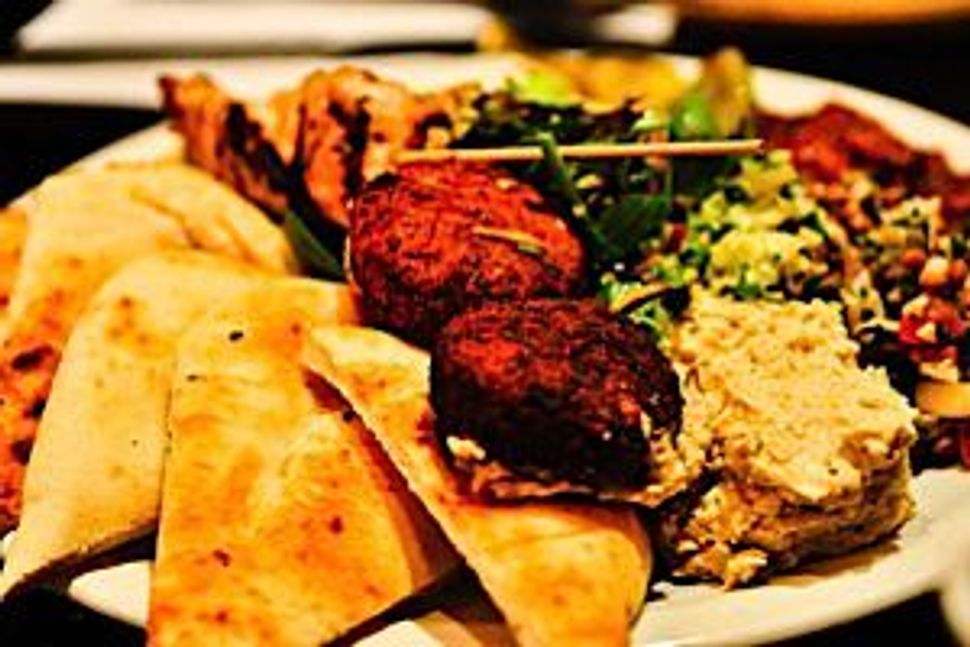 It all started in 1996, when Liora Gvion first wondered why the food served at a local restaurant in an Arab-Israeli town with a primarily Arab-Israeli clientele was the same as what was on the menu of Arab-owned restaurants that catered to Jewish Israelis. The sociologist of food, who lectures at the Kibbutzim College of Education and the Hebrew University, spent the next ten years, off and on, trying to figure out why this was so.

The result was a book, “B’gova Habeten” (“Abdominal Height”) published in 2006 about the political and social aspects of Palestinian food in Israel. The book will be released in English soon. Gvion spoke to the Jew and the Carrot about a related study she recently completed: “Cooking, Food and Masculinity: Palestinian Men in Israeli Society.”

“In most countries, when it comes to ethnic foods, there is a difference between restaurants that cater to members of that group and those that cater to the mainstream, or others,” she stated in a phone interview. For example, in the U.S., the food served in a Chinese restaurant that is frequented by Chinese people is not the same food that Americans think of as “Chinese food.”

Gvion discovered that Palestinian restaurants serve the same kind of food — dishes that have been adopted by Israelis, such as hummus, kebabs and the like — no matter where they are located and who their clientele is. She wondered why they weren’t serving Palestinian “home foods” in establishments where most customers were Palestinian. She explained that these are dishes “made with seasonal wild herbs and parts of animals, like the belly button, gizzards and offal.” Many are stews, and some are concocted from leftovers — something she said Palestinians would never serve to outsiders. “There is much more to Palestinian food than Israelis know about it,” she emphasized.

Through in-depth interviews with 100 Palestinian men and women living in Israel, Gvion learned that in Palestinian society, decisions about what constitutes private and public food are the providence of men only. These distinctions convey some critical information about both masculinity and Palestinian national identity. Men exert their masculinity and solidify their domination over women by insisting that only women do the domestic cooking, while at the same time forbidding them to cook in the public sphere. Men alone are chefs and restaurateurs, which are significant breadwinning professions. Gvion also found that this deliberate separation between private and public spaces by refusing to serve “home foods” in restaurants, was also a way of showing respect to women.

During the course of her research, Gvion met many younger professional women “who are trying to keep up with family traditions and not disrupt family systems, while gaining access to areas [of society] they didn’t have access to before,” she said. Givon was especially impressed by how these busy women, rather than completely abandoning complicated, laborious recipes for “home foods,” used timesaving modern technologies and gadgets to make them after a long day in the office or classroom.

“One time I got up very early in the morning and drove several hours to meet a Palestinian woman who invited me to watch her make a dish called couscouson. I figured she wanted me to get there so early because it involved rolling couscous from scratch,” Gvion recounted. “But when I got to her home at 9 a.m., she spent four hours serving me breakfast, showing me her daughter’s wedding video, and taking me around to various neighbors. Only at 1 p.m. did she start cooking… And instead of making the couscous by hand, she surprised me by opening a bag of pre-packaged ptitim [marketed as Israeli couscous in the U.S.] and pouring its contents into a pot of boiling water.”

It was clear to Gvion that food was about far more than nutrition for these mothers. “In a lack of a state and the legitimacy to sustain a Palestinian identity, they use food as a key way of teaching their children what it means to be Palestinian,” Givon noted.

In the meantime, Palestinian food prepared and served in the public sphere by the men is also about identity. The men control which Palestinian foods are shared with outsiders, and which are not, thus guarding Palestinian nationality. They limit the loss of Palestinian identity by preventing its diffusion by Israeli appropriation of Palestinian culinary traditions.