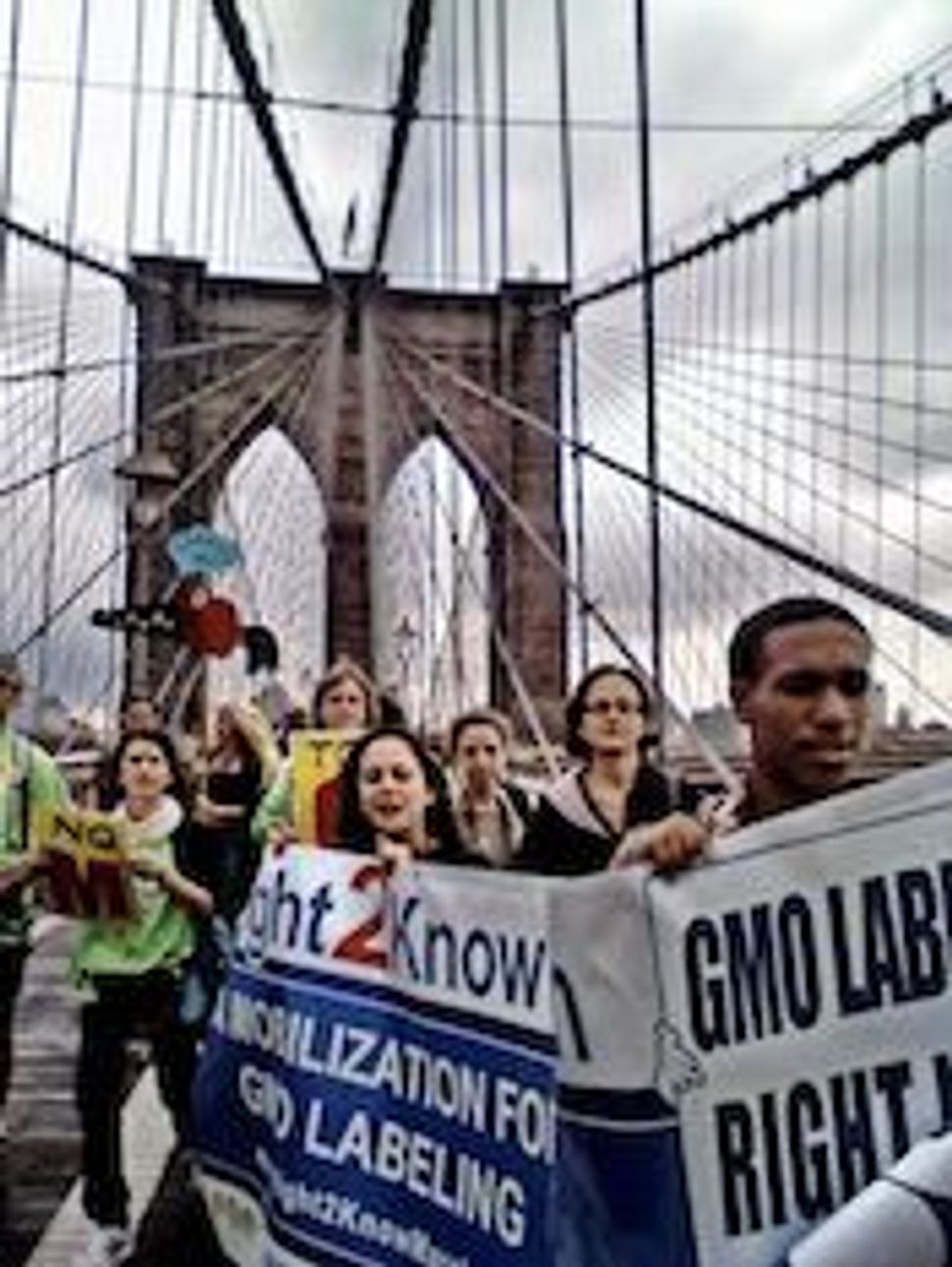 Right2Know marchers on the Brooklyn Bridge Image by Ariel Vegosen

On Yom Kippur this year, I felt my ancestors calling me more than ever before. Normally I spend Yom Kippur in synagogue, but this year I did my t’shuvah (repentance) on the road, walking through neighborhoods, cities and country landscapes as part of the Right2Know March to get genetically modified (GM) foods labeled. As I fasted and marched alongside 50 other people — some fasting, some not — I felt deeply moved and spiritually motivated to share my Yom Kippur journey and determination to label GM foods with other Jews.

In America today, there is no way to know if we are eating foods containing genetically modified organisms (GMOs). The Right2Know March is built of a community of organizations, businesses and individuals who are walking to the White House with a simple message: label our food that contains GMOs. The march started on October 1 in Prospect Park, Brooklyn and is arriving in Washington, DC on World Food Day, October 16. We are walking 313 miles because we are deeply concerned about the health and environmental risks of GM foods and believe that everyone has the right to know what is in their food. As a Jew, I believe that GM foods are not kosher and are not in line with how the Torah teaches us to take care of the earth.

The Right2Know March is a result of growing frustration with President Obama’s pro-GMO stance, made apparent when his administration approved planting of GM alfalfa in January 2011 while leaving unfulfilled his campaign promise to label GM foods. The Right2Know March wants President Obama to keep his campaign promise made in 2007, which stated that foods that include ingredients from genetically modified crops should be labeled. As president, he vowed, he would strive to “let folks know when their food is genetically modified, because Americans have a right to know what they’re buying.” (Video of the President’s campaign promise can be seen at here.)

Fellow marcher Adam Eidinger, from Washington, DC, marched 18 miles on Yom Kippur, fasting the whole way. Upon reflection of the day he told me it felt symbolic that he couldn’t walk more than 18 miles, as 18 is the numeric value for chai, or “life.” “Fasting and walking helped me focus on atonement and tikkun olam, which is a unique Jewish idea of healing of the planet,” Adam said. “In a way, our Yom Kippur marching was an atonement for all of humanity’s careless manipulation of nature while also a chance to share our Jewish culture and identity with non-Jewish people on the march.”

The Right2Know March is being sponsored by numerous companies and organizations including [the Non-GMO Project, the Sustainable Living Road Show, and IFOAM. Faith-based communities supporting and endorsing the march include Urban Adamah, Wilderness Torah, Yiddish Farm, and the Community of Living Traditions.

“As long as there is great uncertainty about the long term effects of GMOs on the environment and upon tikkun olam, and justice issues that arise from the right of communities to access their own seeds, plants, and land (a right currently challenged by many food corporations), the use of GMO food products should be questioned. People who view GMO food products as muktzeh — out of bounds for eco-kosher use — have a right to know which products contain GMOs. GMO ingredients should appear on food labels,” said Rabbi Lynn Gottlieb of the Shomer Shalom Network for Jewish Nonviolence at The Community of Living Traditions.

Ariel Vegosen is an environmental activist, a Jewish educator, and works with Mintwood Media and Dr. Bronners Magic Soaps, which sponsored the march. She is currently walking from NYC to Washington DC as part of the Right2Know March and can be reached at [email protected].