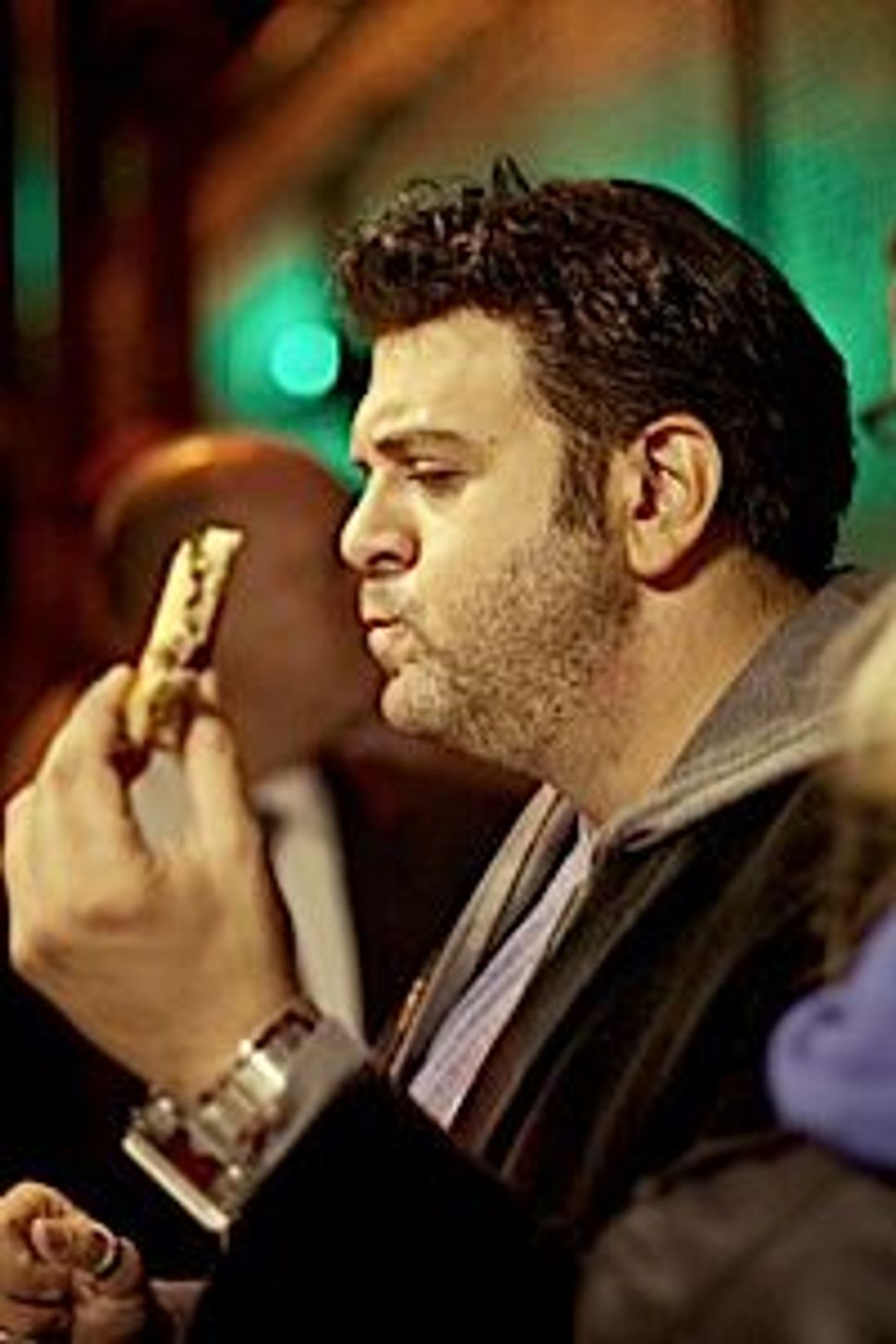 In this two-part series Eitan Kensky takes a sharp look at food travel shows and the evolution of Adam Richman’s popular show “Man vs. Food.”

Travel food shows are mysteries with the host as detective. Our host takes us to a dark, unknown corner of the globe to try to discover something new and ostensibly worth eating. Rather than a crime, the emphasis is on the uncovering of the meal, and the moment of truth: was it as delicious as rumored? The host’s smile, mouth covering (with a napkin or with an open palm) and immediate urge to take another bite let us know for sure. Case closed.

These shows are also mysteries on another level: what is the best way to translate the experience of eating to a visual medium where the viewer can never taste the food? The similarities between the filmic techniques of cooking shows and those of pornography are now well-established. Cue the right music and camera angles and we’ll lust for anything, no matter how unappetizing it may otherwise be. The recent documentary “El Bulli: Cooking in Progress” took a different approach, going, not always successfully, for food as magic. In comes sweet potatoes, and out, after unexplained alchemy, comes something previously unimaginable. The problem with the “Cooking in Progress” approach is that food and cooking is the opposite of alchemy. Half the fun of molecular gastronomy is learning about the processes that transform food, which the film elides to preserve our wonder at the final dish.

But Adam Richman’s “Man vs. Food” has gone for something more visceral, replacing the sin of lust with the sin of gluttony. In “Man vs. Food,” Richman, the Emory and Yale School of Drama educated Jewish host, travels to cities across the country in order to attempt food challenges, such as eating six “Atomic” chicken wings, or a 12 egg, five pound omelet served on a pizza platter. Recently, the show re-launched as “Man vs. Food Nation,” and instead of Richman taking on the challenges, local residents attempt them.

“Man vs. Food” is based on the premise that TV inherently loves excess. No-one wants to watch “Some Encounters with Bears”; we want to see “The Most Shocking Bear Attacks.” Richman is a showman giving us gargantuan proportions of food that can’t possibly be consumed. His show isn’t about eros, but conquest. “Man vs. Food” turns human necessity into antagonism: either Richman will defeat the food, or the food will defeat him.

“Man vs. Food” gave us gluttony as a spectator sport, which Richman made much more entertaining than any competitive eating competition. He is always in good spirits, no matter what he is about to ingest, adding a human dimension and tragedy to the eating. Doesn’t the show seem like a Faustian bargain? Richman is given the opportunity to do the thing he most enjoys professionally (eat), but the manifestation of that desire is so outrageously excessive — and so visibly painful —that it makes you wonder if he will ever enjoy eating again.

Richman himself writes perceptively and self-critically about “Man vs. Food” for the Travel Channel’s website, and understands his show’s appeal. In a blog post, “So Why Man vs. Food Nation?”, Richman dismisses the rumors that he is physically incapable of hosting any more, and explains that the reason the show needs to change formats is because of his self-understanding of the medium. “If I weren’t a realist and didn’t understand what makes TV watchable, I’d do [the challenges] for years to come. However… spectacle diminishes over time.” His solution was to make the show more participatory and to celebrate the average person’s attempt to eat giant amounts of food. Yes, you too could be on “Man vs. Food Nation” one day.

Spectacle, however, was never the whole story of the show’s greatness. What made “Man vs. Food” unique among food shows was its ability to speak to multiple audiences simultaneously. On one level, it allowed health-conscious Americans to laugh at (and be revolted by) our brethren who gorge themselves on unappetizing foods, or foods so spicy that eating them probably violates the Geneva conventions. On the other hand, it — and really I should just say Richman — celebrates the people who just want to eat big portions of good-tasting American food, and challenges us to ask what’s wrong with that.

The secret of travel food shows (and possibly all food shows) is that it’s never about the food. No matter how elaborate looking the final meal, the only thing we directly experience is the way the host-detective acts and reacts. What keeps people viewing is Richman’s well-honed theatricals skills at conveying emotion, his ability to re-make any restaurant into a stage, and the sense he gives off that the only person’s judgment and taste he ever mocks is his own.