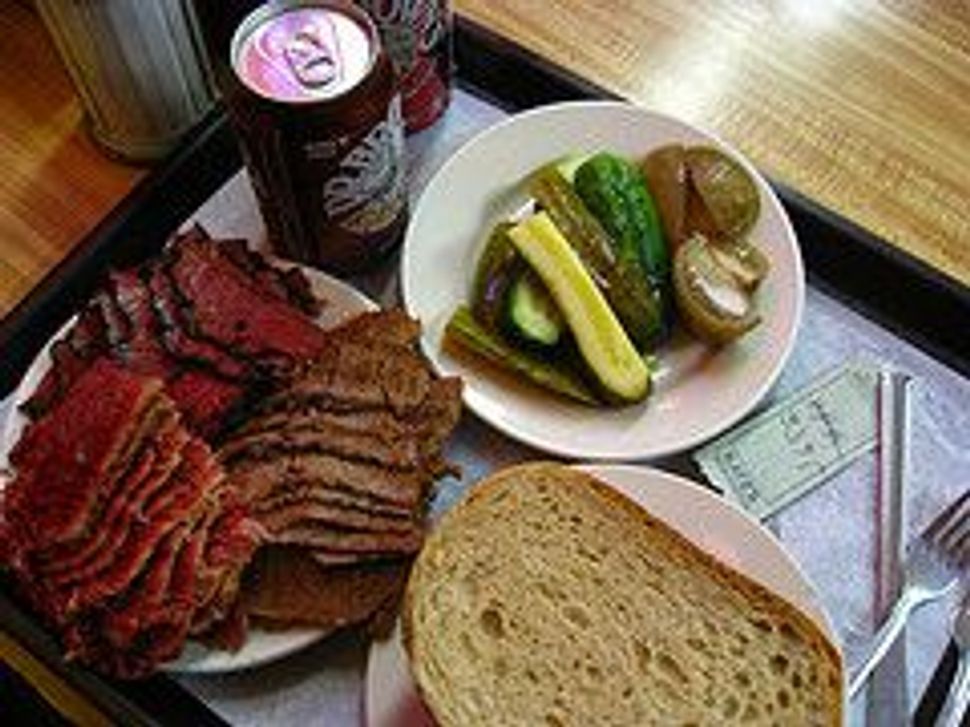 One of the most striking elements of “Man vs. Food” was the way it flattened all ethnicities into generic American challenges. The idea of de-emphasizing difference made it rare, if not unique among food shows. Both of Travel Channel host Andrew Zimmern’s shows were built around the idea of eating local and indigenous cuisines that most American’s find disgusting, such as unborn chicken eggs, squirrel and calf (testicles) — especially when the exotic locations Zimmern traveled to were in America, like the Gulf Coast, or the immigrant neighborhoods of New York and Los Angeles. “Man vs. Food,” however, didn’t exoticize ethnic foods or treat them as an other to be discovered; rather ethnic restaurants were just another way to experience over-sized, over-seasoned, or over-spiced American portions.

This approach was especially prominent during the first season when Richman visited Katz’s Deli in New York. The show went out of its way to not make reference to Katz’s Jewish origins. None of the patrons interviewed appeared to be Jewish and Richman treated Katz’s only as a general New York institution that serves very meaty sandwiches. There were, it’s true, a few codes for Jewishness in the presentation. Richman’s mother came to share the food with him, and he referred to her as the person who first introduced him to Deli, but he left out why she introduced him to it in the first place. His mother worried that his upcoming challenge would be “unhealthy,” making shtick out of the stereotype of the over-protective Jewish mother, but it backfires. Given the toxic spiciness of the food Richman is going to ingest later that night, the Brick Lane Curry House’s spicy p’haal, allegedly the world’s hottest curry, she isn’t so much the over-protective Jewish mother as the voice of reason. Nonetheless, it was striking that a 21st century food show didn’t mention that Deli is a Jewish food par excellence, and Richman’s mother presumably took him to delis as part of his heritage.

But a funny thing happened recently in the transformation of the show into “Man vs. Food Nation”: Richman started celebrating ethnic fare for its unique flavors. In the Milwaukee episode, which aired earlier this year, Richman explicitly refers to Benji’s Deli as serving Jewish food (given that the sandwich he ate was the “Hear-O-Israel,” an imposing combination of deli meats including corned beef, pastrami and salami — this was arguably unavoidable). Klezmer music plays in the background, a women refers to herself as a “convert” to Deli, the name of the sandwich is written in mock Hebrew script, and Richman wear a T-Shirt that read “Black Shabbat” instead of “Black Sabbath.” He even uses a mock Yiddish voice when he talks about what makes Benji’s so tasty.

Of course, the music switches to the bad funk of 70’s pornography the moment Richman takes a bite of his “Hear-O-Israel,” but this sudden return to the typical sounds of food shows exemplifies a large part of what makes his show compelling. Richman plays off and parodies the history of food and travel shows and the way television generally creates associations. Richman uses long-standing audio-visual cues (or codes) to tell us that we are in a Jewish space, consuming Jewish foods, then immediately switches to a different set of cues and codes, subtly mocking the way food shows often rely on erotic impulses.

While the scene at Benji’s Deli could be read as Richman’s attempt to re-write his earlier eating at Katz’s, the rest of “Man vs. Food Nation,” suggests that this is really the result of Richman’s turn to a format that better embraces local color and flavor. The show is now more interested in the factors that make a city unique and less homogenized than in seeing all of America as the same culinary region. Ethnic heritage is a part of regional identity, and something that adds to our enjoyment of food. All the better if it improves the televisual experience. It’s as if in celebrating you the viewer (and asking you to eat), Richman now wants to find out who you are.