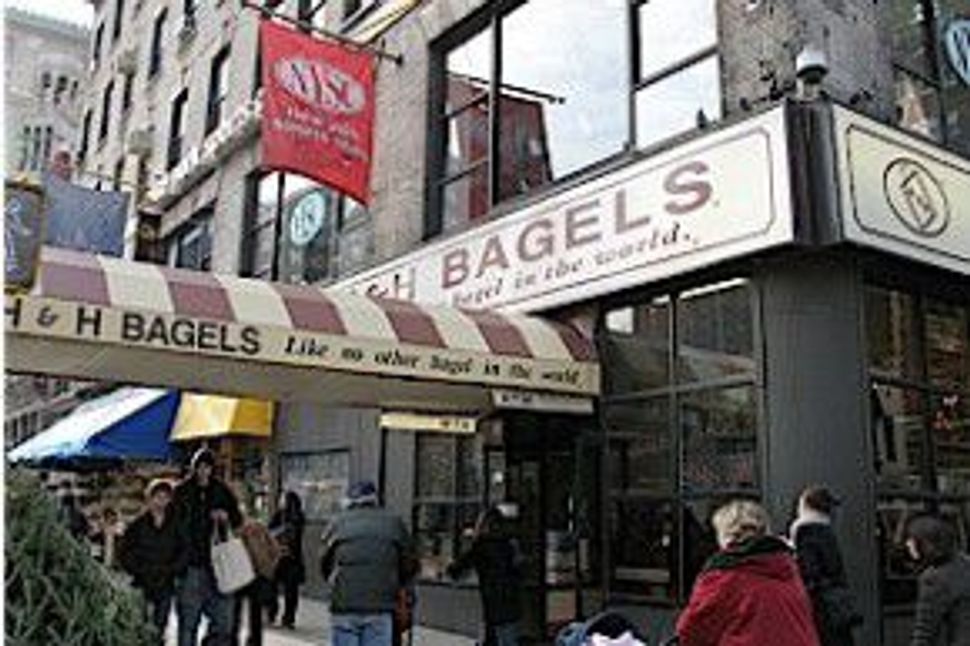 But round baked goods may rise again in those cold, dormant ovens. DNAInfo reported today that Queens-based Davidovich Bakery, which bills itself as “the only manufacturer in the world that makes hand-rolled kettle-boiled bagels for the wholesale community,” may open its first retail location in the hallowed space where H & H sated bagel cravings, 24/7, for nearly 40 years.

(For a history of the bagel, check out our timeline)

“We’re hoping to open imminently,” Marc Fintz, the company’s director of business development, told the Forward. “[It’s] where we want to be, in a neighborhood where we want to be,” and the company is in negotiations with the landlord says, Fintz. Davidovich “has a lot of respect for the historical, iconic associations of being in the bagel business, and there’s no more iconic location than 80th Street and Broadway,” he added.

The company, which launched in 1998, may even use H & H’s baking equipment for its own operations, Fintz said. “The good thing about bagel-baking equipment is that there’s no obsolescence — the machines never break… it might be fun to keep their equipment, like going back to ancient relics. We’d be using historic ovens that have been there 40 or 50 years.”

While Davidovich may lack H & H’s sacrosanct brand presence in Manhattan, Fintz insists his company’s built a strong profile through high-profile wholesale customers like Barzini, ‘wichcraft, and the Carnegie Deli in New York City; likewise, the baked treats are sold in gourmet markets and kosher specialty shops in New Orleans, Boston, North Carolina, Georgia, and Atlanta, Fintz said. The company’s begun a push into the Midwest as well.

“We keep getting inquiries from people saying, ‘We love your brand. Where can we buy it?’” he said. At the same time, “we have to be a little more conscientious about customer relations. When you’re H & H…you can charge $1.40 a bagel…You can say ‘we’re not going to put butter on a bagel, and we’re not going to renovate for 20 years.’” Fintz said Davidovich has not yet finalized a retail price for its bagels.

If and when Davidovich opens, it will also offer bagel accoutrements. “We don’t take offense if people want to put butter and cream cheese on our bagels, even though they’re delicious without.” Unlike the notoriously all-business H & H, Davidovich may also offer seating —meaning bagel junkies may finally be able to settle that jones on the spot. Like its predecessor, Davidovich plans to stay open 24 hours a day, seven days a week. And while the bagels themselves will still be kosher, Fintz said the company hasn’t decided whether to run the shop as a kosher-certified facility.

And what about the goods? Fintz insists that “ours is a truly genuine, traditional, New York City kosher bagel. Most bagel companies in recent years, including H & H, have moved away from the traditional style. If you look at the product from H & H after it went into the wholesale market, it was no longer kettle-boiled or hand-rolled. We’ve managed to maintain the integrity of the product.” Crisp outside and chewy inside, Davidovich bagels sound closer to bagels of yore than the aerated, inflated zeppelins now so prevalent in New York.