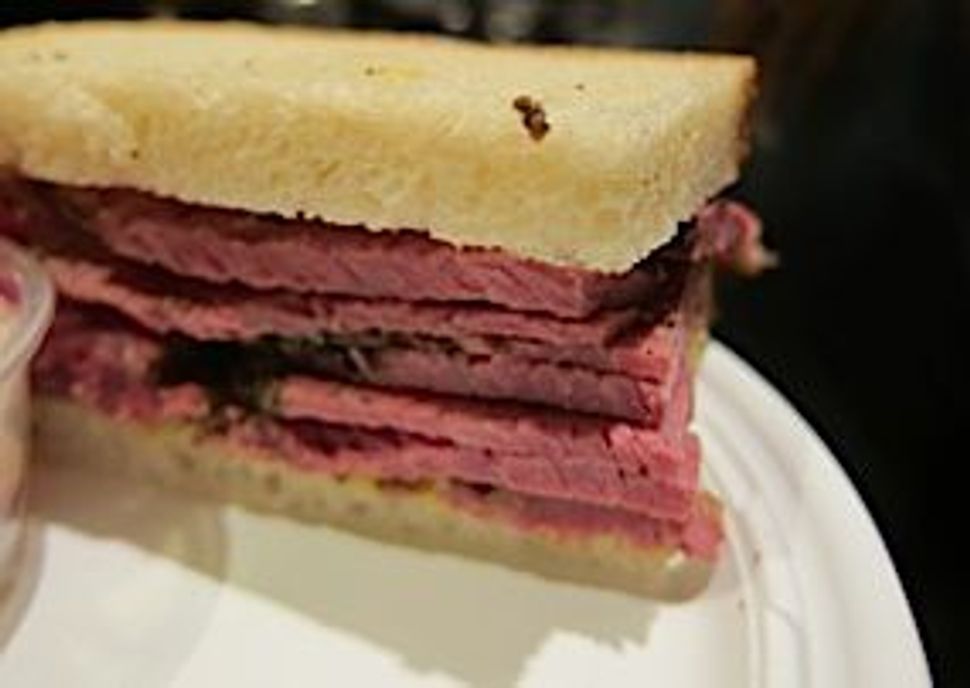 Come November 15, New Yorkers need not pile into the upstate-circa-1950s-bound DeLorean to experience the hospitality and family atmosphere of Kutsher’s Hotel & Country Club — a classic of the Borscht Belt. With the opening date of Kutsher’s Tribeca fast approaching, the buzz is mounting, and it’s grabbing the attention of city dwellers that hold fond memories of vacationing in the Catskills. Though Jewish delis and appetizing shops like Mile End and Shelsky’s, and even the quickly flopped Octavia’s Porch have helped put Jewish food back on the New York foodie map, members of the Borscht Belt golden era seem to bare the most excitement for this new American Jewish bistro.

In a recent talk and tasting event at New York City’s Tenement Museum, former Kutsher’s employees, vacationers and even a few who stayed down the road — at the Concord and Grossinger’s — gathered to learn about the new restaurant and sample the menu. “We’d say, ‘We’re going to the mountains,’ and everyone knew where you were going.” recalled Rosalie Reinhardt, now 83, of the Borscht Belt’s heydays. Another guest at the event, Vivian Gornik, a waitress at Kutsher’s in 1958, spoke of how that era came to a slow in the 1960s when families had enough money to fly to Florida or Puerto Rico, “The last incarnation was when men came to get laid and the women came to get married!” Gornik said with a laugh.

The food that guests remember is nothing far-fetched: bagels, lox, gefilte fish and, as Tenement Museum President Morris Vogel hopes at the new Kutsher’s, blintzes. At the spinoff eatery, classic Jewish cuisine will be brought into the highbrow playing field with new twists and quality local ingredients. Descriptions of wild halibut gefilte fish with a horseradish beet tartar and house-smoked pastrami were met with oohs and aahs from guests at the Tenement event, as did talk of kasha varnishkes with organic quinoa and greenmarket mushrooms. An updated version of the Saturday night rib eye tradition will also hold a spot on the new menu, in the form of a schmaltz rub rib eye for two, accompanied by duck fat fries and mustard greens.

While the size of the new Kutsher’s will decrease to seat 140 from its Catskill counterpart (which fed 1,000 people, three times a day), the quality is certainly set to improve, with the help of chef Mark Spangenthal (formerly of the Upper East Side’s Dining Room). According to one of the main men behind the project, Zach Kutsher, who grew up at the family country club, “The genesis for the food was looking to elevate the cuisine [using] healthier, lighter cooking styles and beautiful presentation.”

Alan Wilzig, a Kutsher’s Tribeca investor and former lifeguard at the original Kutsher’s, said that the most unique part about dining at Kutsher’s was the personal attention that guests received from the wait staff: “The waiters were taught that everyone returned… it was incumbent to the wait staff to remember what people like so that it would be waiting there before you got there.” A variation on this family-friendly atmosphere will manifest itself in a contemporary way through the restaurant. “We wanted to do something authentic and with a retro feel, but sophisticated,” said branding consultant Richard Kirshenbaum, who compared the “Jewish cuisine trend” to the transformation that Italian food in America experienced over the past 25 years.

Though places like Katz’s, the 2nd Avenue Deli and even Florida’s Rascal House and Wolfie’s are staples in the Jew-food world, a deli is not what Kutsher has planned. “We’re carving out new ground. Our design and atmosphere will set us apart,” said Kutsher, who admitted that places like Mile End have indeed helped trail blaze for this moment that Jew food is experiencing. “We fit in [to this moment] by elevating and advancing the cuisine…. We’re not a deli, we’re a Jewish American bistro. Our dishes are works of art.”