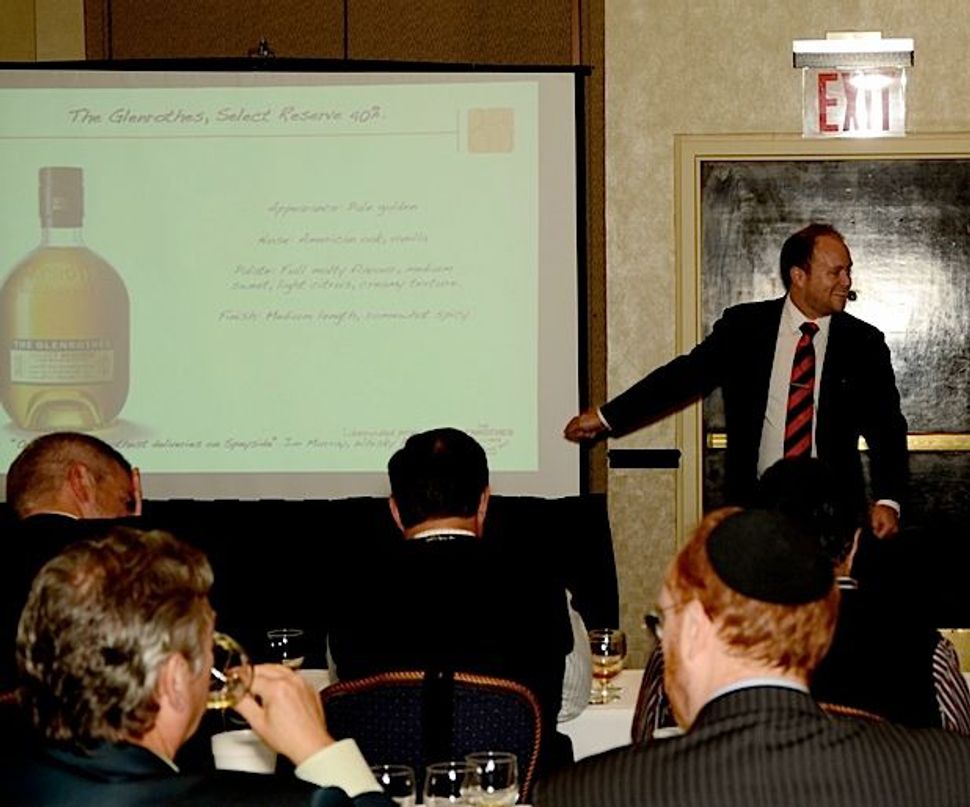 Convincing ten straight men to talk seriously about an artisanal product for half an hour is like pulling teeth: Convincing 2,000 straight men to pay over $100 each to discuss nuances in its process and product for three or four hours on a Tuesday night, is marketing gold. And that’s the genius of WhiskyFest New York (and Chicago and San Francisco) — getting a crowd of men to approach a premium, gourmet product as if it were baseball.

And, despite this year’s WhiskyFest New York on November 1 being held inside the Marriott Marquis hotel, a sprinkling of baseball caps were indeed in evidence. They were, however, not being worn out of respect for America’s secular religion, but worn by some individualistic members of the Modern Orthodox population who were extremely well represented at the event. Largely, though, black kippahs were de rigeur for those sipping the smooth, honeyed grass flavors of the 30-year-old Old Pulteney or the beautifully rounded peaty tones of the 17-year-old Balvennie.

As has been the case for the last few years, members of the tribe were again strongly represented — to the approximate tune of somewhere around a third of the attendees. It’s obviously difficult to count exactly, because there’s no mandatory checkpoint for mosaic whisky quaffers and, of course, the sticky question of who, exactly, is a Jew rears its head. But caps, kippahs and some excellent beards testified to a strong showing that, for once, was not only restricted to the visitors.

As I’ve written previously, whisky makers have noted our predilection for the golden spirit and have begun to market themselves as kosher. Whether due to the hecksher or to the general deliciousness of Glenmorangie in general, the lines as a whole were thickest at the Glenmorangie/Ardbeg table, as well as for the not-explicitly-kosher but nevertheless exquisite end-of-run tasting of the Glenrothes 1985. But what caught my eye, if not the crowds, was the “American – Organic – Kosher” sign above the Koval table.

For an event that is so tied to a particular and conservative view of tradition — whisky as an ancient homebrew perfected by ruddy Scottish farmers in the late 19th century as a double-distillate of barley fermented with perfectly pure water — Koval were playing a dangerous game. Even the Indian and Japanese whisky producers — Amrut with its Two Continents brand and Suntory with their Japanese highlands location — are trying to write themselves into the story as a new exotic flowering. As a Chicago-based, organic, locally sourced, family-run kosher business with hopes for sustainability but established only three years ago, Koval felt like whisky hipsters next to the grand old men of the spirit.

Given the relative youth of their product in a market where age is everything, distiller Robert Birnecker and his wife Sonat have gone for choices — white whiskey (and they include the “e” in their product) from a variety of grains, all organically sourced in the Mid-West. The oat, spelt, millet, wheat and rye whiskies carry the flavors of their unusual grains but they are still raw, and cannot yet hold their own as aged products in this mature marketplace. The spelt whiskey had a raw rye-ish sense that might mature into something interesting and unique, the rye itself had the beginnings of floral and juniper tones that might make it a delightful sipper in a few years but I found the Dark Oat unpalatable. Best of the bunch at this point is the millet, whose sharp nutty flavor felt like it properly represented the brand.

And it seems they know they are telling a different story. Koval appeals less to the beard and hat side of Brooklyn than to the beard and retro spectacles set. Their slim pastel bottles are, especially in the testosterone context of WhiskyFest, decidedly girly, and the backstory of Austrian Birnecker and his Chicago-native partner using a German distilling technique to make “the first (legal) whiskey distilled in Chicago since Prohibition” is cute rather than impressive. They named their single-grain, single barrel whiskey Lion’s Pride after their older son Lion and, just to prove theirs is a family business, they even called their baby Rye!

Sadly, though, it seems as though the exploration of the dynamic between traditional and progressive Jewish whisky (and whiskey) drinkers will be put on hold since the organizers, in their infinite wisdom, have decided to change the event from a single night affair on a Tuesday night to a two night extravaganza on Friday and Saturday night. It’s true that demand had been outweighing supply and that the tickets had been selling out early, but moving WhiskyFest to shabbas will radically change the nature of the event and probably prevent orthodox whisky-lovers from attending.