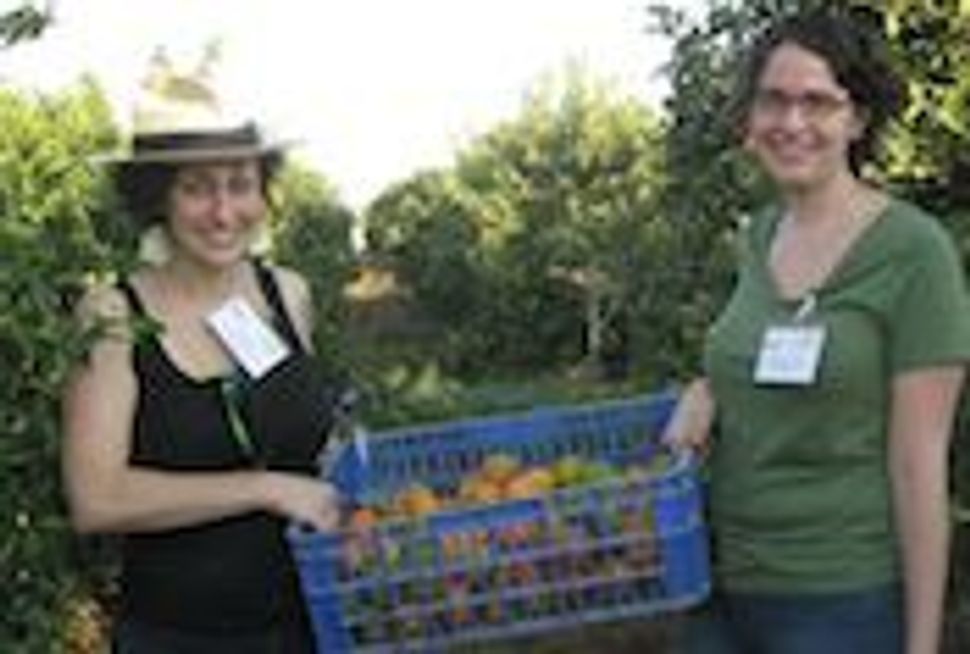 Living in Tel Aviv means that I take a lot of things related to food for granted. I know that when I go to the market, veggies will be much, much cheaper than packaged foods and fresher than most places in America. I know that nearly any time of day or night I can order a latte and sit with my computer for hours, without anyone rushing me to leave. I also know that the season for tomatoes is more similar to the one I grew up with in California than the one I got used to coping with in New York. Those are everyday kinds of things that I’ve learned after more than a year of living in Israel.

But last week I had the pleasure of exploring the food landscape of Israel from a new angle as a participant on the Israel Sustainable Food Tour, sponsored by Hazon and the Heschel Center for Environmental Learning and Leadership. Jeremy Benstein of the Heschel Center crafted a tasty and interesting itinerary that kept us moving and eating across the country. I was treated to meals in restaurants I never would have found on my own, visited farms where folks are doing incredible work, and met outstanding people who are invested in food issues here in Israel. We explored themes that I spend a lot of time thinking about but less time engaging hands on.

We learned about the links between poverty, nutritional insecurity, and waste in Israel when we gleaned at Leket’s farm. The above photo shows me with Judith Belasco, Director of Hazon programs shlepping clementines we picked there. Inspired by Deuteronomy 24:19 we harvested fruit to be distributed to food-insecure families in Israel. (I’ve long been impressed with the food rescue work of Leket and encourage everyone to do a program with them on your next trip to Israel.)

Visiting the organic dairy at Kibbutz Harduf (and the tasty vegetarian meal that followed!) was a chance for me to think about my values and my wallet. The Kibbutz is one of a handful of places in Israel that follow the teachings of Rudolph Steiner, the man who inspired Waldorf educational methods and biodynamic farming. Love Steiner or hate him, the dairy at Harduf has applied his teachings into two impressive endeavors. Firstly, they invented an innovative manure composting method. They successfully deal with the immense amount of dung produced even in small-scale dairies. Without going into too much detail, let’s just say everyone on the tour was pretty impressed with their stellar management of a major challenge. But the farm itself and its sustainable practices aren’t just environmental — they’re societal as well. The Kibbutz provides therapeutic and residential services for a community of young adults, and part of their therapy is working on the farm and in the dairy. Their work is amazing, their cows happy; yet, I can’t bring myself to pay double the cost of a product that’s already so expensive here in Israel. And, as it turns out, neither can most Israelis. There isn’t enough of a demand in Israel for organic milk, so some of what they produce at Harduf is sold with the rest of the cow’s milk on the market as non-organic.

Our journey took us to the village of Kafar Manda. That was a chance for me to think about our relationship to our non-Jewish neighbors and citizens of Israel. A Muslim Arab farmer named Ali hosted us on his small land. The weather was perfect and we enjoyed sweet minty tea, coffee, and freshly made tabbouli and pita smothered in za’atar. While exploring his crops I enjoyed trying to learn the names for veggies in Arabic (a radish is “فجل” which sounds a bit to me like fujaleh). When I asked if I could buy about $5 worth of vegetables from him to take home to Tel Aviv, his daughter Fatima filled a huge bag with chard, spinach, cilantro, carrots, radishes, and other fresh treats that I shared with friends for the next week. Ali told the group that he likes growing for the CSA type project טפרית מקומי (tafrit m’kumi, or “Local Menu”) because he gets better prices for his vegetables and because he can grow a diversity of things that people in his village don’t eat, like beets, basil, and other treats. I was lucky to take his veggies home and to feel so welcomed by his family, but I wonder if he would have the same reception in the homes of my neighbors in Tel Aviv.

My travels with the Hazon Heschel food tour ended too soon, but it is nice to come back to a normal routine where I can incorporate some of the things I learned into my own shopping and cooking. I continue to struggle with the questions we raised and to think about the amazing people we met.