Pass the Turkey, Hold the Religion 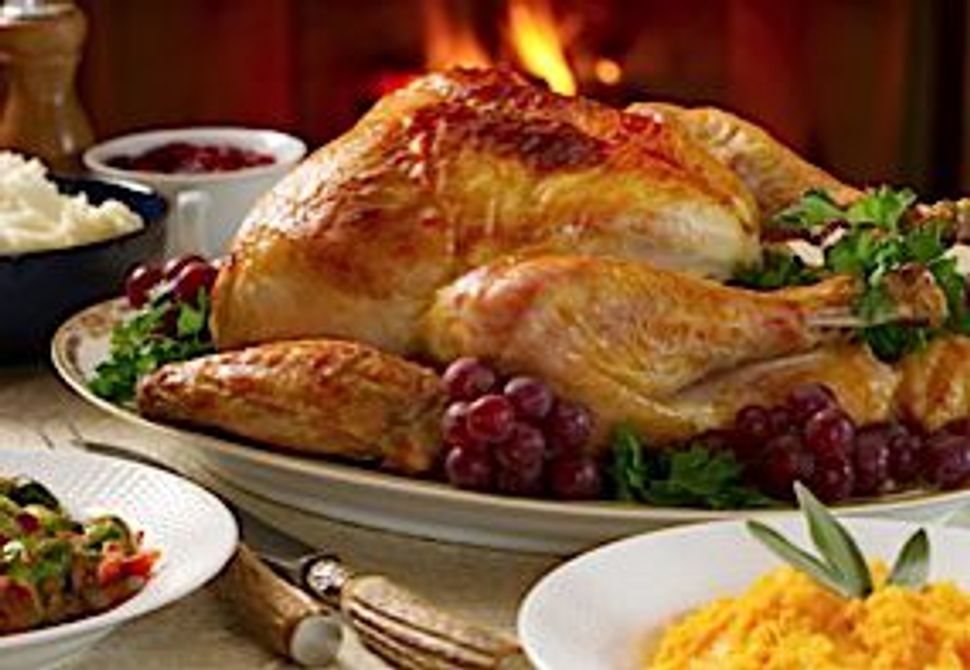 To many American Jews, this questions seems to have an obvious answer. A holiday that involves copious amounts of food and stressful gatherings of relatives? Of course, Jews celebrate it! Yet, questions posted on the websites from Yahoo to UrbanBaby show that confusion persists over whether Jews observe the day.

And actually, it is not as obvious a question as you would think. Thanksgiving’s origins were more Christian than they were patriotic. According to historian Jeremy Bangs, director of the Leiden American Pilgrim Museum in the Netherlands, the famous 1621 meal between the Plymouth Pilgrims and the Wampanoag Indians likely had some religious under (or, perhaps, over) tones. Remember, these were the Pilgrims, the ones who pissed off everyone else in England by being too zealously religious.

It was not until President Lincoln’s 1863 proclamation that Thanksgiving became an official holiday to be observed annually and uniformly throughout the country. At the time, the religious, and specifically Christian, aspects were still a big part of the day. In 1868, Pennsylvania Governor John W. Geary upset many in the Philadelphia Jewish community when he declared Thanksgiving to be a day for all to thank God with “Christian humility.” Angered by this implicit exclusion, the rabbis of Philadelphia signed a protest, arguing that religious beliefs should not be imposed on the day. Still, the Christian origins would linger for decades before Thanksgiving became the inclusive national holiday it is today.

The more the focus shifted from religion to food, the easier it was for others to join in on the Thanksgiving fun. Over time, the holiday meal, and specifically the turkey, became the main celebration. And in terms of Jewish Americans’ participation, it didn’t hurt that the traditional turkey could be kosher (imagine the extra tsuris if the holiday food had been ham).

As early as the 19th century, there is evidence of American Jews embracing the Thanksgiving meal. One of the first Jewish American cookbooks, Bertha F. Kramer’s 1889 “Aunt Babette’s Cookbook,” lays out an entire Thanksgiving menu for lunch and dinner, with turkey at the center of it. Perhaps a little more unexpected, is that the turkey is garnished with oysters, which are also the first course on the menu.

Yet, the menu wasn’t so shocking for American Jews at the time. “Aunt Babette’s” was published as Reform Judaism was taking hold in America. The book targeted more established American Jews who were trying to acculturate (not the more religious Eastern European Jews who were beginning to stream into the country). The book embraced the Reform movement, arguing against traditional kashrut. Kramer wrote, “Nothing is ‘Trefa’ that is healthy and clean.”

Yet, there is something ironic in this 19th century culinary advice because today, our Thanksgiving meals bear the unique stamp and history of the people cooking it. Some families have kosher Thanksgiving turkey, and others do not. And some families who have kosher turkeys, are not even Jewish.

Today, the food on the Thanksgiving table is as diverse as the people sitting around it and passing out on living room couches in food comas. And, whatever the exact reason, the Thanksgiving menu today seem to be less about emulating some strict definition of what it means to be American and more about expressing ourselves through our food (my family serves tzimmes alongside our turkey). In contrast to “Aunt Babette’s” advice, our menus are meant to show our culture, our personality, and our (dietary) beliefs. Each one has meaning and is American in its own way.

(One exception: I have no idea what meaning can be derived from turducken.)

Pass the Turkey, Hold the Religion