Have Your Treyf and Eat It, Too 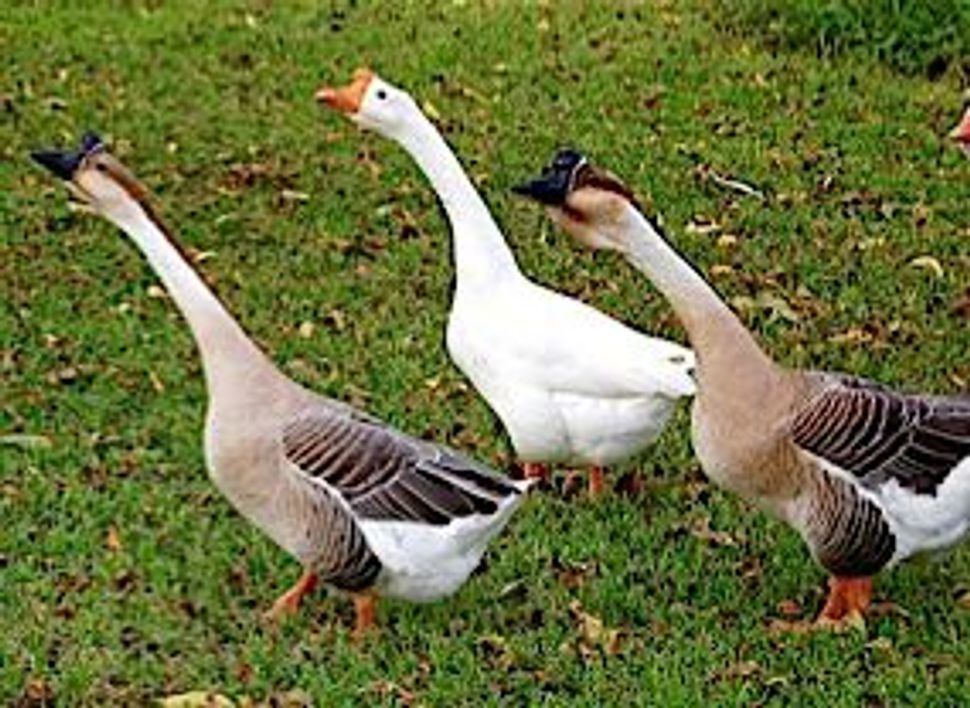 A recent development in kosher meat is stirring up controversy among Jews both observant and secular. It’s Spanish goose. Spanish farmers discovered that the flesh of their organically-raised geese tastes exactly like pork. Two entrepreneurs caught wind of this culinary phenomenon and immediately foresaw a market for the swinish treat: treyf-curious Jews. Now, all it needs is rabbinical approval.

To be sure that the flavor is authentically porcine, Metzger sent samples to three non-Jewish chefs. All agreed that the flavor of the Spanish goose is astonishing — just like pork. (What kind of pork it tastes like, we don’t know yet. Fried chops? Sugar-cured ham? Bacon?) With flavor stamp of approval at hand, Metzger argues that an authentic-tasting alternative to pork might persuade secular Jews to choose kosher.

The news has already produced mixed reactions of fascination and disgust from both observant and secular Jews. Centuries of abhorrence have made the pig an icon of evil in the Jewish psyche. Looking back through history and hearing Talmudic voices describing swine as abominable, abhorrent and even walking privies, it’s not surprising that many would turn up their nose to the meat.

Others, and among them secular Jews, argue that this goose is “fake food,” like substituting seitan for meat. Furthermore, eating it is sort of a betrayal of Jewish values. “What happened to convictions?” asked one indignant (non-kosher) chef in a Facebook post.

So the question is: does it violate the spirit of the law to eat flesh that tastes like pork, even if it’s glatt kosher and blessed by seven rabbis?

Apparently, not. The spokesman at the Israel Rabbinate’s office assures us that it’s not a new breed of genetically-altered goose. The birds are conventional geese, who are kosher, whose flavor is the unintentional result of what they eat. Metzger bases his approval on a Talmudic statement that says that for every forbidden food, a kosher substitute with the same taste exists somewhere in the world. Semetic swinologist Jeffrey Yoskowitz says this isn’t new. “There are other foods that have been created or discovered to have tasted like pork in the past.” Accordingly, Metzger says, people who shudder at the pork-flavored goose “will get used to the idea.”

On the humanitarian side, the Spanish suppliers declare that the geese are not force-fed to develop painfully big livers, as in the classic foie gras. Au contraire, they range freely on clean pasture land and thrive on organic feed.

Natural breeding takes longer to produce mature geese. So we won’t be seeing the pork-flavored fowl until February of 2012. And when it arrives in Israel, will the ordinary householder be able to afford it? We’ll have to wait and see. In the meantime, many kosher chefs and foodies are agog with the possibilities. I eagerly await pork-flavored roast goose in red wine sauce, with rosemary-scented, caramelized apples on the side.

So, relish, or resist? The choice is up to you.

Have Your Treyf and Eat It, Too