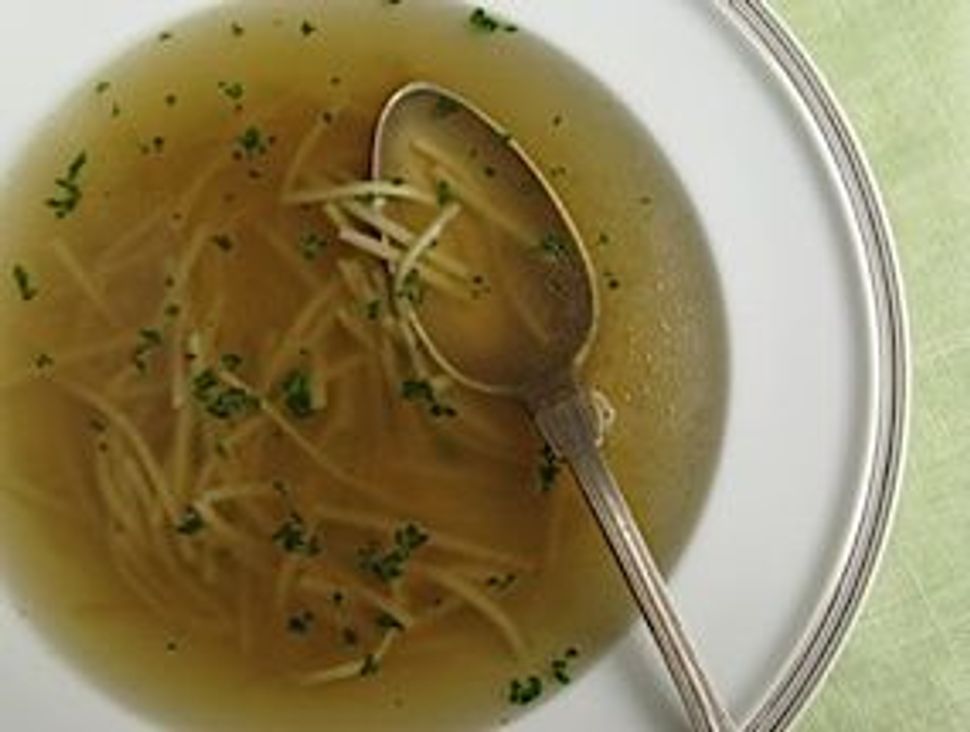 The Shabbat dinner tables of my two grandmothers were never complete without noodle soup. Each grandmother made it on a weekly basis — it’s such a basic staple of Jewish cooking. Nana, who was from Eastern Europe always made chicken soup (hers was like liquid gold), while Oma, from Germany, made beef soup, a base of so many soups in the German-Jewish cooking tradition. As different as they were, I loved both versions and I have always felt lucky to have two distinct cooking traditions in my background.

When my parents met, they were each introduced to the food traditions of the other’s family. My mother, whose family rarely cooked chicken, remembers eating a glorious roast chicken the first time she was invited for a Friday night meal cooked by her future mother-in-law. Conversely, my father remembers the first time he visited the Rossmersfor a Shabbos meal and being surprised by the berches, the German-Jewish version of challah. It looked totally different than what he was used to: it was longer and narrower and was sprinkled with poppy seeds. It was that night that he also came face to face with Oma’s beef noodle soup for the first time.

My mother, Gabrielle, grew up with the soup which was served in a variety of ways — with thinly sliced pfannkuchen, or German pancakes; or with the addition of liver dumplings; with her favorite, matzo balls; or with the weekly standard, noodles. She has told me of the weekly pre-Shabbos rituals of her mother and grandmother when she was growing up in Washington Heights in New York City, a neighborhood with a heavy German-Jewish presence.

My grandmother, Erna, did the shopping. She made a few strategic stops on her whiz along 181st Street. At the butcher shop she collected the bones and a piece of soup meat, which was probably flanken or brisket. Then on the way home, she stopped at Tony’s, the greengrocer. He sold neat little packets of soup greens, which included a carrot, a stalk of celery, an onion, a parsnip and a few sprigs of parsley.

My great-grandmother, Emma, made the soup. She did that every Thursday so it could be chilled overnight and skimmed on Friday. She washed everything — bones, meat and vegetables, which all wound up in the big, black, enameled pot that had been brought with them when they immigrated from Germany. It kept the soup at the perfect simmering temperature for the many hours that it cooked.

My mother remembers the soup ritual fondly, “By Friday evening my grandmother had changed out of her checked housedress into something more elegant. My Opa, wearing his starched white shirt and suspenders on his striped European trousers, recited the Shabbos Kiddush from memory,” she told me recently.

Her memory brings to mind being in my grandparents’ dining room in New Jersey with the dark red walls and the long white tablecloth. Opa stood at the end of the table and said a blessing over the berches. After we’d raised our glasses in l’chaim, we sat down to start the meal with soup. It was a dark, clear broth with thin, golden noodles floating in it. It was infused with a rich, meaty fragrance that wafted up from its shallow bowl as it was set down on the table and it always signaled the start of a wonderful meal and a four-generation old recipe.

1) Wash meat under cool running water. Place meat and water in a 4-quart heavy-bottomed soup pot. Bring to a simmer over medium heat.

4) The next day, remove the layer of solidified fat from the surface of the soup and discard.

5) Return soup to the pot and set over low heat.

6) The reserved meat, diced or shredded, can be added to the soup. Alternatively the boiled beef, hot or cold, will make a tasty meal with horseradish.

7) While the soup is reheating, boil water in a separate pot and cook noodles according to package instructions. Drain. Add noodles to soup.

8) Serve soup, sprinkled with chopped parsley or chives in each bowl, if using.

Sonya Gropman and her mother Gabrielle Rossmer Gropman are currently researching a book on German-Jewish food. Sonya photographs and writes about food on her blog eat+art+word.