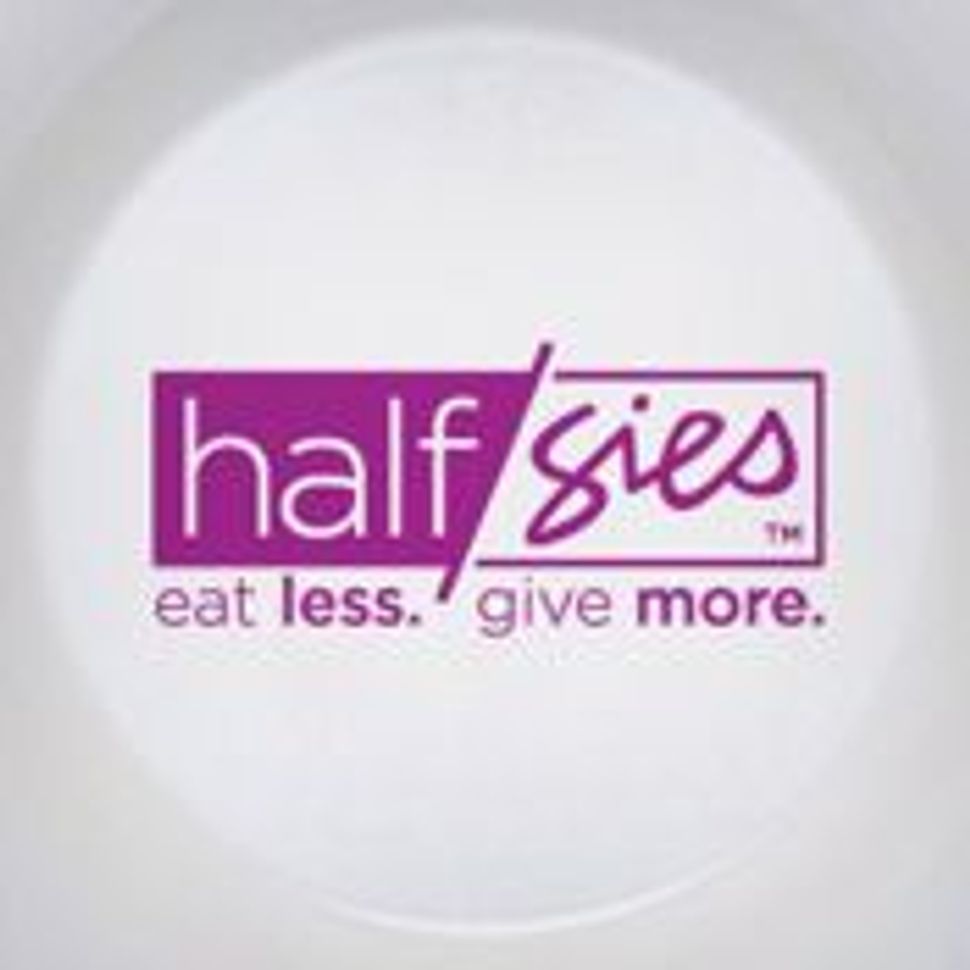 Restaurants have also come under increasing scrutiny because of the rapid rise in portion sizes, with single servings often containing more than the recommended daily allowance of calories. These large portions either encourage people to eat beyond their satiation point or leave much of the food to be thrown out. Combined with the growing number of meals that Americans eat in restaurants and the fact that restaurant food often contains more salt and fat than comparable food served at home, the super-sized restaurant meals are a major factor in both the obesity crisis and the food waste epidemic.

So how do we as individuals and communities try to uphold the value of ba’al tashchit when we eat in restaurants? Many of us curb our instinct to eat mindlessly by taking home leftovers or by splitting dishes. Through the blog Wasted Food, I learned of an innovative program taking shape in Austin, Texas.

Halfsies is being developed as a partnership between consumers, restaurants, and local and global anti-hunger organizations. When at a restaurant, rather than order a giant portion, one could choose to “Go Halfsies!” and be served a half portion, with the restaurant donating the cost of the other half of the meal to charity. The Halfsies program has been in slow development for a decade but is now preparing to launch this spring in Austin, Texas, with the hopes of eventually going national. Donations from the restaurants will be tracked on the same systems that are used to order food, sent monthly to Halfies, and then distributed to anti-hunger organizations. (For more info on the details click here

I spoke with Sydney Berry Ling, Halfsies Communications Director, who co-founded Halfsies with her friend Rachel Smith when Smith was frustrated by the huge portions she was served when traveling for work. She told me that she didn’t know much about food waste before getting involved with Halfsies; educating the public about the problem is as much a goal of Halfsies as the charitable support that will be provided. “Halfsies brings the community together to talk about the issue of hunger,” says Berry Ling. “Think about the table; it’s where people come together to eat and discuss life. We are putting the issue of hunger where people are, so they don’t have to go out of their way to learn about it.”

Why would a restaurant choose to support this program and why might a consumer decide to “Go Halfsies?” “This program is beneficial for everyone,” Berry Ling emphasized to me. “Everyone wins. The customer eats healthier, the restaurant receives a tax deduction for their donation, and the local non-profits will be strengthened.” Halfsies is still looking to sign up its first restaurants, which Berry Ling hopes will happen soon after the launch of the educational efforts and pilot launch in Austin.

Berry Ling hopes that Halfsies will teach Americans to look at the core issues behind hunger and poverty and will draw attention and financial support to visionary local and global organizations that are supporting people achieve self-sufficiency. She hopes that the communities where Halfsies takes root will become healthier communities, with lower obesity rates and less food insecurity.

Ultimately, Halfsies challenges restaurant goers to think more mindfully about their every day actions, both when they order food in restaurants and at home when they cook. Berry Ling hopes that through Halfsies, people will become more educated about the core issues of food waste, oversized portions, and hunger, perhaps even without realizing it. “I want people to know that our choices do matter. People don’t think that oversized portions are such a huge issue. They order food and think, ‘Oh this plate is more food than I need but at least I won’t be hungry.’ So there’s an awareness that comes with Halfsies that emphasizes that our choices do matter. We think our choices are small, but all of those choices add up to make a big problem.”