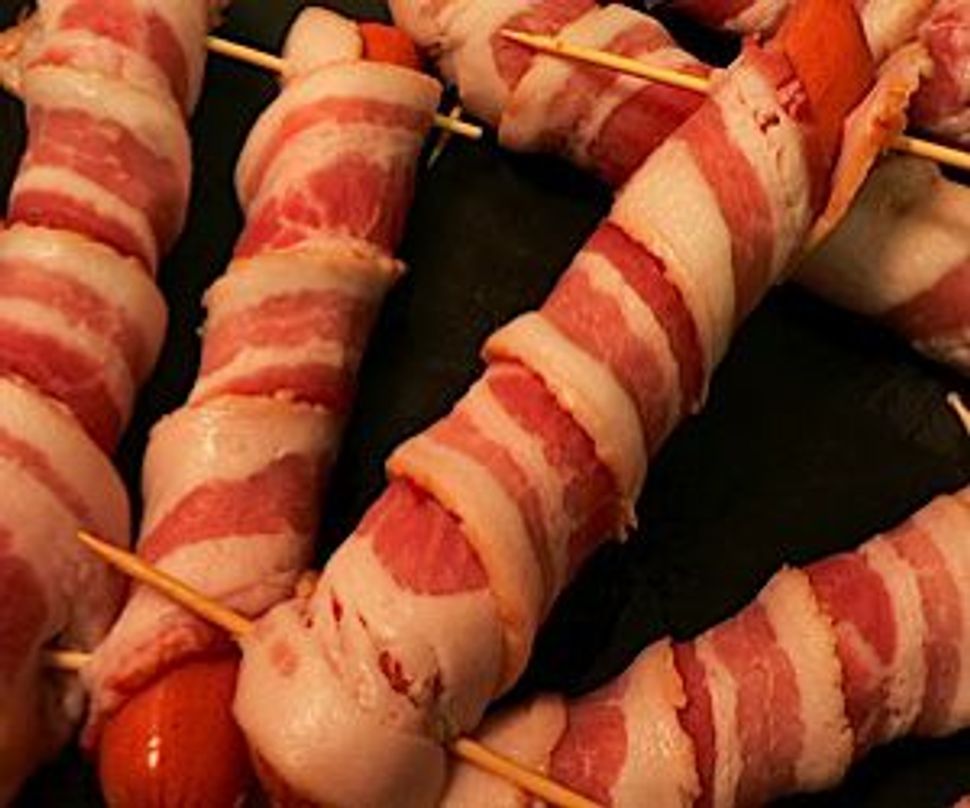 You don’t need to see the movie “American Pie” to know that there’s a complicated, but very real relationship between food and sex. Earlier this month, an Islamic cleric in Europe called for a ban on women touching the seemingly innocuous banana and cucumber, for fear that foods resembling male sex organs would arouse them.

Even innocent cookies have been linked to such wanton behavior. Loved by Girl Scouts and other s’mores aficionados, the graham cracker was originally developed by Reverend Sylvester Graham in 1829 as a way to stifle sexual desires. And if Islam and Christianity have complicated histories conflating food with sex and repressing the desires associated with both, then it’s not surprising that the religion behind both Sigmund Freud and the plump Hebrew National dog must, too.

Despite the ample evidence to the contrary in Woody Allen movies, Judaism has some pretty liberated views about sex, though usually when involving husband and wife. The Talmud specifies how often a man must have sex with his wife, and historically, if either spouse withheld sex, it was recognized grounds for divorce. Like sex, kashrut is well defined and controlled by regulations and prohibitions. And while who you sleep with and what you eat may seem like completely separate decisions, Jewish laws and culture suggest that these choices are intertwined.

For one, when it comes to food and sex, the hallmark Jewish guilt acts as a bridge over neurotic waters, connecting the two. We may be the People of the Book, but we’re also the People of the Hang-ups. There’s a lot regarding sex that is forbidden and about which we, of course, feel guilty. So guilty that we smother our derelict desires in a triple-decker pastrami-corned beef-chopped liver sandwich or a plate of latkes stacked as high as Mount Sinai? Well, maybe…

That’s at least what Isaac Rosenfeld would argue. A favorite among many New York Intellectuals, Rosenfeld took to the pages of Commentary magazine in 1949 to express his belief that the obsession with food in Jewish culture was symptomatic of larger issues with sexual repression. “Eat, eat, eat…. food is not food and it cannot satisfy a hunger that is not hunger.”, he wrote.

Rosenfeld was referring to the kind of hunger that no amount of hypertension-inducing treats could fulfill. After observing a number of Jews salivating at the making of Fry Beef, a kosher bacon alternative, Rosenfeld concluded that the spectators were in a “sexual trance” from witnessing the making of “kosher treyf.” Treyf, he explained, was not just a simple BLT, but rather “the whole world of forbidden sexuality, the sexuality of the goyim, and there all the delights are imagined to lie…”

Though Rosenfeld’s pronouncement may seem like a psychological stretch, it’s hard to argue with the lore surrounding treyf, and especially the king of kosher felonies, bacon. The apple may have caused Adam and Eve’s sinful fall from grace, but for Jews, the real forbidden fruit is bacon. For conflicted Jewish bloggers, there’s even the website “Pork Memoirs” to share their emotional experiences with the swine. Sexually-loaded expressions like “treyf virgin” and “lost innocence” abound when describing relationships with bacon. A Forward article discussed the tempting nature of the succulent meat, quoting one modern Jew as saying, “It’s like, oh boy — touch that bacon, you’ll eat anything!”

Anything, indeed. The consumption of bacon gives new meaning to the expression “loose lips sink ships,” especially if by “ships” you really mean the Jewish people. The OK Kosher Certification’s blog describes the kosher diet as “containing the spiritual nutrition for Jewish survival.” First it’s the side order of bacon with the lox omelet, then it’s the ham and matzo sandwich over Passover, and before you know it, you’re knocking boots with a Lilly Pulitzer-clad debutante in the bathroom of a Fisher Island country club. You won’t even remember where the Vineyard Vines boxers and your acceptance letter to Vanderbilt came from as you’re slurping down New England clam chowder.

Rosenfeld’s argument, however, was less about interfaith relationships and much more about exploring sexual possibilities outside the realm of Judaism. He saw Jewish sexuality as overwhelmingly constrained and stifled — he lived (and died) in a world before Philip Roth novels, Dr. Ruth programs, or Mila Kunis. Particularly with the practice of niddah, the prohibition of intercourse during menstruation, he saw a Jewish obsession with sterile separation. He believed that the division between milk and meat perpetuated an unhealthy sexual barrier between women and men. Thus, in his mind, a kosher home instituted this sexual separation and created the “most harmful form of repression.”

Now, calm down, Portnoy, before you start shouting “Amen, brother!” Rosenfeld is not the only member of the Tribe with a say on the kosher food-sex dynamic. Others have found the guidelines and, yes, even the restrictions in both of these activities to add meaning to daily life.

Professional Torah pundit Shmuley Boteach argues that observing Jewish laws on eating and sex is a way to show respect for these acts. “If we do it right, sex is a technique based on a profound understanding of ourselves, in much the same way that food may be kosher or unkosher,” he wrote in “Kosher Sex: A Recipe for Passion and Intimacy”. Boteach makes explicit the benefits of refraining from unrestrained consumption or overindulgence of either nature: “[I]n the same way a human does not stick his head into a trough the same way that a horse would, he does not and should not copulate the way animals do.”

Many modern Jews would take umbrage at the comparison of their sexual behaviors to those of a barn animal — and understandably so. Just as some Jewish scholars argue that kashrut is antiquated, so, too, is it argued about the laws governing sex. In Judaism, it seems, when it comes to food or sex, it’s never as simple as “I’ll have what she’s having.”