The Lay of the Lamb: Shabbat Dinner in Papeete 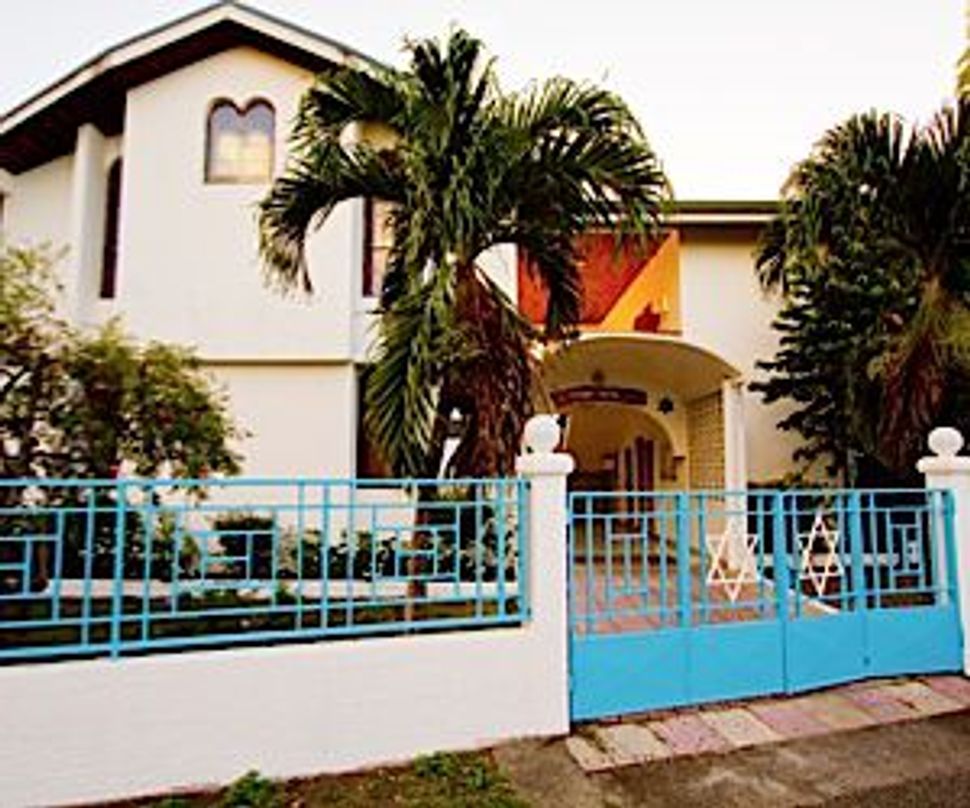 Whenever I’m away from my home in Melbourne, wherever I find myself on a Friday night, I love nothing more than to sit down with the local Jews at their Shabbat table. Ideally with some kosher meat to break the traveler’s drought.

Sometimes though, simply being a hungry-eyed, friendly stranger at a Kabbalat Shabbat service isn’t enough to attract a dinner invitation; and normally, I would have thought, a linguistically deficient stranger notable from across the room for his rivers of tropical sweat would have been distinctly unattractive.

Yet, such is the hospitality of the Jewish community of Tahiti, that one balmy Friday night almost two years ago, as I was leaving the Papeete synagogue that my fellow worshipers fought over me. I was able to decipher that much French. “Where is he sleeping?” “He can stay with me.” “But where is he eating? He can eat with us.” “No, I’ll have him.” “No – I’ll have him. Who speaks English? He doesn’t speak French, who speaks English?” Merde. (My own little embellishment) And then it was settled: “Chichiportiche, your son speaks English.” “Oui. D’accord.”

My hosts Gilles and Corinne Chichiportiche were each born in France to Algerian parents. With a handful of Ashkenazi exceptions, much of the rest of the 50-family Tahitian-Jewish community was born in Algeria, Morocco or Tunisia, or in France with roots in the Maghreb. Gilles runs a home appliances business in Papeete, with Corinne’s brother Bernard, who joined us for dinner along with the Chichiportiches’ 24-year-old son Raphael.

The Chichiportiches’ Shabbat table is an amalgam of Algerian-Sephardi and French culinary influences and customs, with a local, Polynesian twist. The language is French, and that night, for my benefit, it was an Anglo-French cassoulet. The family’s warmth and welcome translates directly; our home is your home.

After a lilting Sephardi Kiddush, it’s whiskies all round. Then, a procession of little sharing plates: nuts followed by a patchwork of pickles; peppers, cauliflower, onion. Israeli salad. Barkan red. The pickles are removed and replaced with crunchy roast potatoes. Then, the pièce de résistance, the weekly delicacy; a magnificent, moist, slow-cooked North-African spiced shoulder of lamb. I’m thrilled. Eating kosher meat in the middle of the Pacific is nothing short of a miracle.

Eight families keep kosher on Tahiti, and they all order their meat from Melbourne, Australia, over 4000 miles away, across the ocean. Three families order from Continental Kosher Butchers, one of which is the Chichiportiches; and Daniel Lewis who runs Continental happens to be a good friend of mine.

The wine flows with the conversation, and my French appears to improve markedly. The lamb is savored and cleared, and out comes a simple salad of the freshest leaves of romaine lettuce. Finally, dessert is pure Polynesia — a delicately sliced, dripping pineapple from Moorea, a neighboring island famed for this honey-sweet variety with its bee-yellow flesh. I’ve never had finer.

Suddenly, it’s late. Gilles and Corinne invite me to stay the night, but I have to be elsewhere in the morning. As we bid one another au revoir, Shabbat Shalom, it occurs to me that I really did feel, profoundly, at home. In fact, Daniel would have sold me the identical cut of lamb in Melbourne — at my Shabbat table it may have been seasoned a little differently, but the flavor and sentiment would have been exactly the same.

For those of you who do not have access to a spit, or a fire pit, you may find this non-traditional method slightly more convenient, whilst this product retains the delicious flavors of that style of roasting. Make sure you request that your butcher does not mark the bones (“for ease of carving”) as it will just result in more bones to pull out later.

2) Set aside 1 tablespoon cumin and ½ tablespoon sea salt and mash in a mortal and pestle remaining spices and garlic into a fine paste.

4) Score shoulder of lamb with a criss-cross pattern and massage paste into shoulder well. Lamb is best left in fridge to marinate covered overnight.

5) Remove lamb from the refrigerator 2 hours before cooking.

8) Drizzle lamb with a little more olive oil. Pour the water into pan.

9) Place lid over lamb; if lid is not a snug fit, use foil or baking paper to ensure moisture is contained, to prevent lamb from drying out. Roast for 3 hours.

10) Reduce oven temperature to 230º Fahrenheit and roast for a further 4 hours. When ready, the meat will be falling from the bone.

11) Mix remaining cumin and salt and either place a pile in the corner of each plate or divide between small bowls.

12) Allow the lamb to rest for 20 minutes then shred the meat from the bone. Place meat onto a platter or divide among plates. Serve with wedges of lemon, freshly ground black pepper and the cumin and salt mixture for dipping.

The Lay of the Lamb: Shabbat Dinner in Papeete