A Lover’s Chicken and Dumplings 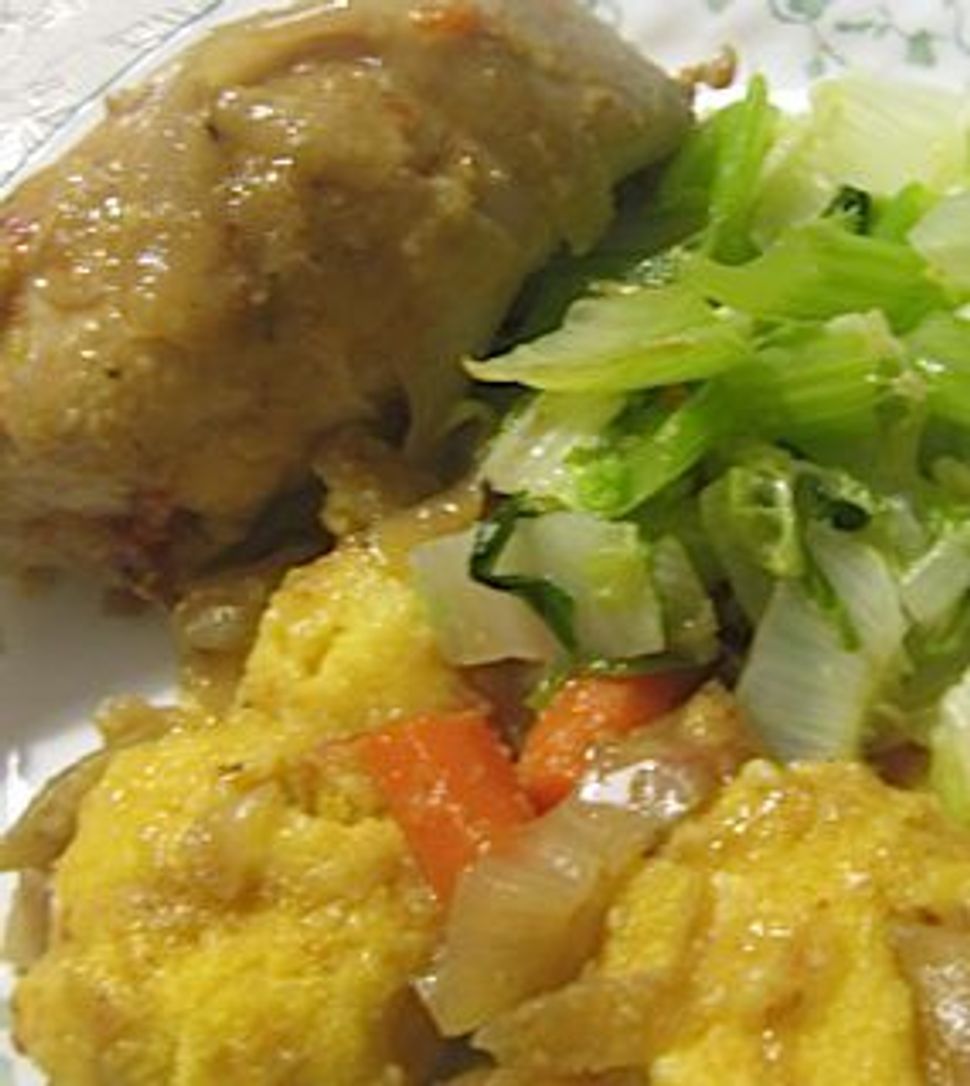 When I was growing up, southern food represented Gentile culture in my imagination. Movies and books depicted church lunches spread out on trestle tables under magnolia trees. Piles of hot biscuits, barbeque ribs, fried chicken, green beans cooked for hours with a lump of bacon, chicken and dumplings cooked in milk and butter. It all seemed mysterious and vaguely disquieting. So much pork!

When I was ten, a song came out on the radio: “Bread and Butter,” sung in a rough falsetto by a trio called The Newbeats. It was great rock and roll with quirky lyrics. A man who loves plain bread and butter comes home early one day to find “Baby” eating chicken and dumplings — with another man. I didn’t understand the implications when I was little, but now it still tickles me somehow. And the song made me curious about this chicken and dumplings dish. What’s so voluptuous about it that the faithless girl would naturally share it with her partner in crime?

I took out my cookbooks and found that it’s a homey chicken stew made savory with vegetables and herbs and topped with corn-meal dumplings like matzo balls. While the dish is claimed by the Southern states, it’s enjoyed in the mid-West as well. There is a dumpling variation where the dough is rolled out thinly and cut into squares, then boiled in stock. But although this flat dumpling has die-hard fans, I preferred the round ones made with corn meal.

The challenge, then, was to create corn dumplings without the traditional dairy. Experimenting, I found that made with water or stock and olive oil, they’re savory and light, with a down-home corn flavor. And as I parted the tender, pale-yellow morsels with my fork, swishing them around the plate to pick up some of the sauce, I reflected that dumplings are basically a steamed quick bread, whipped up out of inexpensive local flours to stretch the chicken out. But they’re so tasty, especially as they soak up the sauce’s delicious flavors, that they’re as important as the chicken itself in this dish.

When I sat down with my husband to enjoy this for dinner, I understood why the couple in the song would choose chicken and dumplings to round out their meeting. Surely, a cozy dish like this fits in wherever there’s love, even the illicit kind.

Pour the olive oil into a large pot. Warm it over low heat. Put the chicken in. Raise the heat to medium-low and brown the chicken all over, turning it every so often.

When the chicken is golden all over, about 10 minutes, add the vegetables, spices and salt. Continue browning another few minutes, until the aroma of the spices rises.

Add water or stock to barely cover everything in the pot. Put the lid on, tilted to allow some evaporation of the liquid. Cook over a medium flame till tender but not falling apart: about 1 hour. The liquid should be simmering, not boiling. To make a sauce, remove the chicken to a separate plate and bring the pot liquid to a fast boil, uncovered. Stir occasionally and let the liquid reduce to a sauce: 10-15 minutes.

Many families like their chicken pulled off the bone. You may do this, returning the shredded pieces to the pot for serving.

About 20 minutes before serving, start the dumplings.

Put plenty of lightly salted water to boil in a big pot. The dumplings expand in cooking and need lots of room.

Sift together the dry ingredients.

Beat eggs with water or stock in a bowl.

Add the egg/liquid mixture into the dry mixture. Stir in oil and chopped herb. Note: Flours vary in their capacity to absorb liquid. To achieve a batter just firm enough to hold its shape in a spoon, you may need to add more liquid by teaspoons if the batter feels stiff, or teaspoons of all-purpose flour if it’s runny. Do not over-beat the batter or you might get tough dumplings.

Drop the batter by soup-spoons into the hot water, pushing it off the spoon with your finger. Cover the pan, reduce the heat to medium-low, and simmer for 20 minutes. The dumplings will rise and float, but will not be cooked through until the full 20 minutes are up.

A Lover’s Chicken and Dumplings