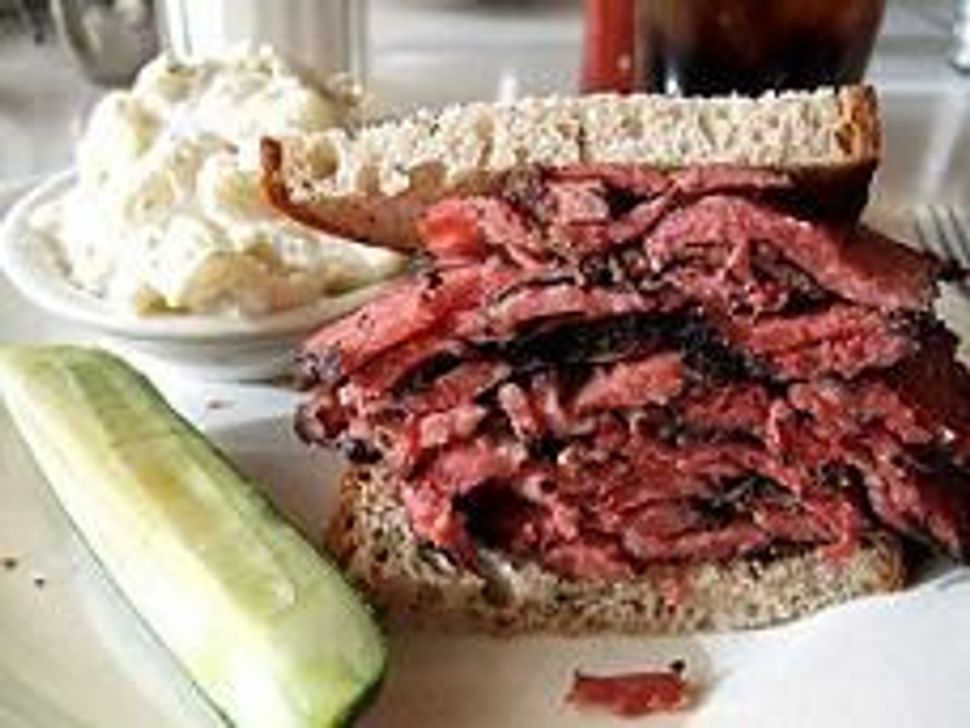 My mother-in-law’s favorite restaurant is a deli called TooJay’s. Whenever I visit her in Florida from my home in Portland, Oregon, that is where she wants to eat. It is rarely where I want to eat. I’d much rather sit out on a sunny deck and drink a margarita than squish inside an unprepossessing diner and eat greasy meat. One day we tried to sate her craving by bringing Too Jay’s takeout back to the pool. Come dinnertime, I asked her if she had any restaurant suggestions.

She’s not alone in her affections. All her friends gather at TooJay’s. At our oldest daughter’s Portland wedding, all the New York relatives made a run for Portland’s take on Jewish deli, Kenny and Zuke’s. My aunt and uncle recently visited us from Tennessee. Where did they want to go out to eat? Kenny and Zuke’s.

For most Jews of their World War II generation, deli is the ultimate comfort food: the currency of childhood, of family and celebration. “My mother would go to the deli every morning and pay in advance for a pastrami sandwich and I would walk over from school at lunchtime and pick it up,” recalls my mother-in-law Edie. “We went out to eat at the kosher deli every Sunday night. For 25 cents you got a three course meal: soup, sandwich and a dessert, usually pound cake, rugelach, or strudel. When I was in high school, Gone with the Wind was playing, and we waited in a long line to get into the movie theater. We got hungry so we bought hot pastrami sandwiches and pickles to take inside. The entire movie house stank of deli. An usher came up and said you can’t do that, but what could we do? We ate it anyway.”

My Uncle Fred recalls, “We would have family parties in the [photography] studio downstairs and all the relatives would come and Uncle Louie would cook. He would have a clothes boiler and put whole corn beefs, pastrami, and spices in them and cook them all day. The relatives and me would gorge themselves on meat, pickles, and soda water. Nothing since could ever compare.”

“Uncle Louie’s corn beef was the main dish at our wedding reception,” notes my mother Gilda. “At Jewish affairs like Workman’s Circle there were raffles, and the winners would receive a shopping bag of groceries, from which a whole salami would stick up—over a foot in length.”

While rye bread, babka, and smoked fish garner some degree of sentiment, it’s the cured meats that arouse true passion—accompanied by, unsurprisingly, guilt.

“Kosher hot dogs were so good. God knows how many fat calories they contained,” says my mother. “The food tasted better. Lots of fat and salt,” notes Edie. “Back then, if it tasted good it was good nutrition.”

Both corn beef and pastrami are made from salt-cured beef brisket. Pastrami is cut from the fattier (“navel”) section of the brisket. Additional spices, including garlic, coriander, black pepper, paprika, cloves, allspice, and mustard are added in the curing process, and the meat is smoked before steaming. The dish — originally known as pastrami — originated in Turkey and spread to Romania via the Ottoman Empire. When Jewish Romanian immigrants settled in Manhattan’s Lower East Side, they opened pushcarts (last century’s food carts). Neighboring immigrant populations — both Jewish and Irish — adopted these delicious dishes with alacrity.

After World War II, industrial food production took its toll on deli meat. Delis bought their meat from giant feedlots, often pre-prepared. Cheap brine substituted for nuanced spicing. Injections of artificial smoke flavor replaced actual smoking. Microwaving replaced steaming. Probably this product degradation is why I did not grow up with the same affection for deli as my parent’s generation. When I moved to Portland, I was perfectly happy to see goat cheese and sundried tomato canapés replace platters of cured meat at weddings and graduations.

But ironically, out in the hinterlands of Portland, deli with integrity is making a comeback. Our Kenny and Zuke’s was named by Gourmet Magazine as one of two delis nationally leading an “artisan revival” in Jewish foods. Owners Nick Zukin and Ken Gordon use quality meat that they brine, smoke, and steam themselves. While their restaurant aims for a nostalgic ambiance, the meat itself doesn’t taste quite like New York deli. It’s milder, less garlicky and salty, with a preponderance of coriander. Kenny and Zuke’s success is breeding a crop of ever-more artisan charcuteriers, who are learning the art of Jewish deli and making it their own. Greg Higgins, an early promoter of local, sustainable cuisine, makes an excellent pastrami at his restaurant, Higgins. John Gorham crafts another fabulous one at his restaurant, Toro Bravo. Chop, an old-fashioned butcher shop, makes a version of pastrami that is thinly-sliced, and highly smoked, more akin to a beef version of jamon serrano.

Meanwhile, Edie is perfectly satisfied her local TooJay’s, one of a chain of twenty-five delis, where all the food is prepared in a central commissary.

“It has everything you want,” she says. “”It’s reasonably priced, wholesome good food.”

Wendy Gordon is a freelance journalist with a master’s degree in Nutrition. She lives in Portland with her husband and children and is an avid cook, organic gardener, and eater.