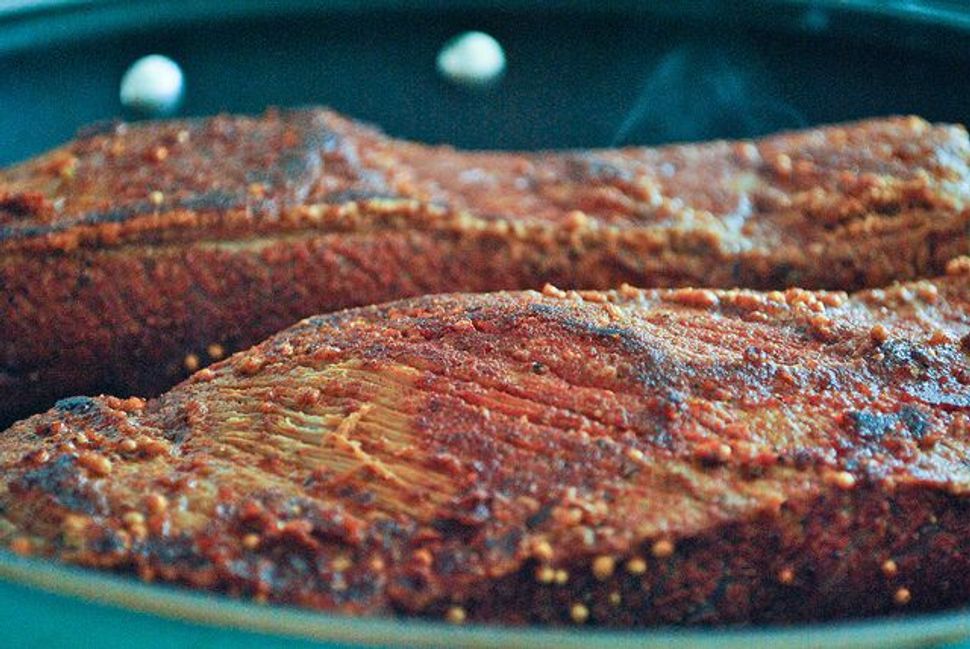 Through my study of anthropology, I have found one area particularly compelling: the relation of food and culture. For instance, the well-known anthropologist Sidney Mintz has devoted his research to find the cultural implications of certain foods, specifically the link between the taste of sweetness and the power divisions it inspires. Mintz argues, “The foods of different peoples, shaped by habitat and by our history, would become a vivid marker of difference, symbols both of belonging and of being excluded.” For me, my interest in food and culture began as an innocent observation of a particular phenomenon: the attraction of Jewish college students to any event that promised free meat. I witnessed friends flock to any event that offered kosher meat, and even celebrate the opportunity to eat meat on Shabbat. And although I first noticed this in college, in fact this phenomenon is deeply ingrained in every Jewish community to which I’ve belonged. My curiosity peaked. I wondered, what was the cultural connection between Jews and meat?

My ethnographer tendencies heightened my awareness, clued me into particular trends, and caused me to seek out meat meals, just to observe this curious tendency. Never being one to enjoy meat, even going so far as to recently embrace vegetarianism, I sought out the opinions of friends and family. No one could really explain the trend, beyond ensuring me that meat was delicious, so why not? I was confused — there had to be a reason for the strong attachment to eating meat.

After reading “Eating Animals” by Jonathan Safran Foer, I found more insight into my question, but certainly not a tried-and-true reason. Foer explains that as the grandchild of a Holocaust survivor, eating meat was a sign of not only health, but also fortune. For his grandmother, living in America following the Holocaust meant religious freedom to be a Jew, and even more importantly, having the ability to afford meat. Eating meat differentiated the Eastern European immigrant population in America from their brethren still in the “Old Country.”

While I accept Foer’s rationale, I think the attachment of Jews to meat has broader cultural roots. Genesis 9:3 states “Every moving thing that lives shall be yours to eat; like the green vegetation, I have given you everything.” The rules of kashrut that were derived from the laws in Leviticus assume the eating of meat, which has only increased in value over time. In sacrifice, animals are the prized offering to God. In addition, the Shabbat song Mah Yedidut celebrates eating meat, by declaring “[It is a time] to delight in pleasures: fatted birds, quail, and fish.” Though choosing what we eat is a personal choice, our culture influences what we choose to eat, whether we realize it or not.

So what does this all mean, especially during a time where there is an increasing awareness of the unsustainability of meat? I acknowledge that there is a tension between the traditional past and new ways of thinking and eating. However, I believe there is the possibility of harmony. Seeing beyond the tradition of simply eating meat that is rooted in a historical and textual past, I will offer another underlying explanation: kavannah, or intention. Eating meat allows one to imbue meaning into the daily practice of eating, despite the fact that eating meat has become a regular eating habit. For my friends who celebrate every occasion on which they eat meat, meaning is added to an act that could easily become banal. Luckily, I believe there are other ways of channeling meaning into the habit of eating. For me, rather than eating meat, I add kavannah to my meals by using fresh, sustainable foods, which allow me to feel closer to the earth that God created.

Though I have yet to find an absolute reason for the Jewish attraction to meat, I have become perceptive of the Jewish emphasis of meat and intention. Agreeing with Mintz’s theory, for Jews, eating meat, and the way it is valued within Jewish culture, is what marks us from others. Eating meat, as well as other things, forms an inextricable bond that is shared among Jews: it is this value which allows us to form communities, even if, like me, it is a practice you do not share. So whether you choose to eat meat or not, use a meal to contemplate the intention you add to eating on a daily basis.

Alyssa Berkowitz is a student in the Joint Program between Columbia University and the Jewish Theological Seminary and is the Food Programs Intern at Hazon.