Mishkin’s Brings a Taste of Deli to London 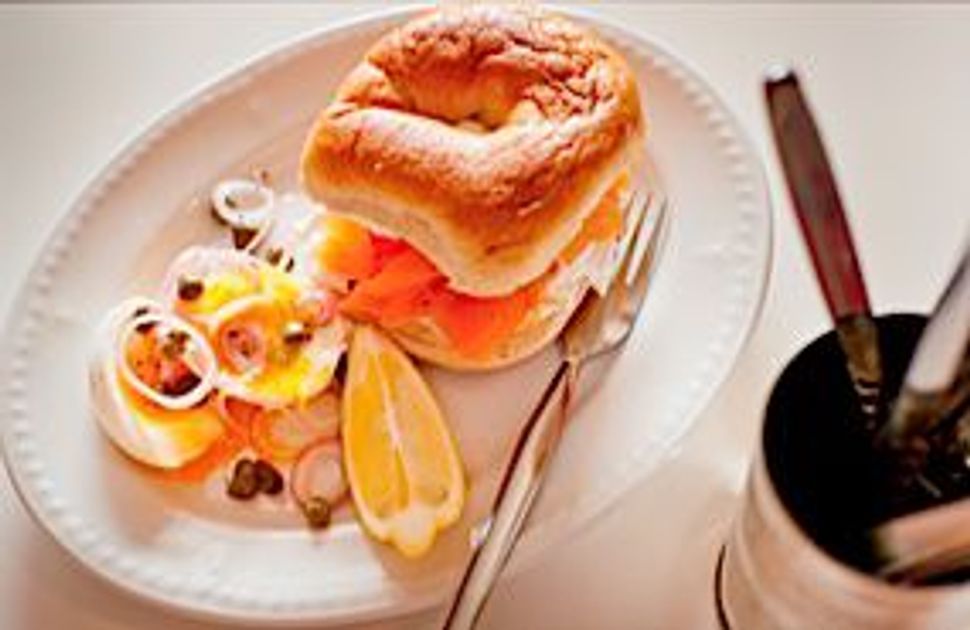 New York made “Seinfeld”; London got the reruns on late night cable TV. It’s a generalization worth risking that, outside of the Golders Green and Stamford Hill epicenters, Judaism on this side of the ocean doesn’t stake its cultural and culinary claim loudly. So it’s fun to sit down in Mishkin’s, Russel Norman’s “kind of Jewish deli with cocktails” spot which opened last December in Covent Garden, and feel the familiar so earnestly and stylishly played with: a little kitsch, without the shtick.

“To me, Jewish food is comfort food,” Norman told The Jewish Chronicle soon after the restaurant opened. “It was eating in some of the New York delis which weren’t obviously branded Jewish that made me think you could take that as a starting point but still have fun with it.”

Norman grew up in Hounslow, southwest London. He isn’t Jewish, but spent more than a decade taking notes in New York and Venice, and Mishkin’s is a paean to a New York deli crossed with a classic Formica London café. Except it’s so much…crisper.

The emphasis is on style rather than kosher. Slip in to a red banquet booth below a white pressed tin ceiling; lean your arm casually against the bright green tiles, while the louchely handsome wait staff drawl “service!” at orders up; roll an eye over the menu set out in classic typewriter font (sandwiches/meatballs/all day brunch/all day supper) and order a ‘refreshment’ from the cocktail list: namely gin, gin and more gin. Those comfort classics are all there – bagels with the “house schmear,” chicken matzo ball soup, pickled herring, chopped chicken liver, a pleasingly Seussian nod to tradition with the whitefish (and spinach) knish and even a cholent boldly far from home. Last weekend they kept a table of older Jewish gents lunching for several hours, (according to our waitress) in defiance of their wives (according to the gents).

That being said, “Mishkin’s is not a kosher restaurant.” The website prepares you, and Norman’s publicist reiterated this in worried tones over the phone. Items like duck hash and fried egg served with a mini boat of “liquor” (gravy, in the old east London pie ‘n’ mash vernacular) or lamb and pistachio meatballs are well-executed and extremely filling, but more gourmet flair than grandma’s. The Reuben sandwich may be a classic (77 sold between 11am and 4pm on January 18th, according to Twitter but it’s not a kosher one. And the ‘All pork Big Apple dog,’ fifth item down on the menu, is unabashed.

“‘It’s terrible,’ the Jewish diners tell us,” said our waitress, herself the only Jewish member of staff, as she brought a jug of tap water to the table unasked (very New York diner, very un-English). “How can you have that on the menu?” But do they order it?

Norman has said that his starting point is a gap in the market — “I’m looking for somewhere to eat and socialize that doesn’t exist in London, so perhaps I need to be the one that creates it.”

With historian Simon Schama recently waxing loxical about Cohen’s, “that temple of smoked salmon and pickled cucumbers” and other “relics of the lost innocence of half a century ago” and the 2010 closure of Bloom’s, an iconic kosher establishment it does seem like good timing.

In fact, the first time my brother and I tried to eat at Mishkin’s, I didn’t make a reservation and we couldn’t get a seat. But here I go, doing exactly what I was worried I’d do, that thing which apparently every other diner does when they eat there: making it all about me.

“Oh yes — that’s not how my mother does it,” said another waitress, in a pretty floral dress and gentle tattoos along her arm and down to her fingers, parroting the clientele with a smile. “I say, you get your mother down here, we’ll put her in the kitchen.”

Mishkin’s Brings a Taste of Deli to London