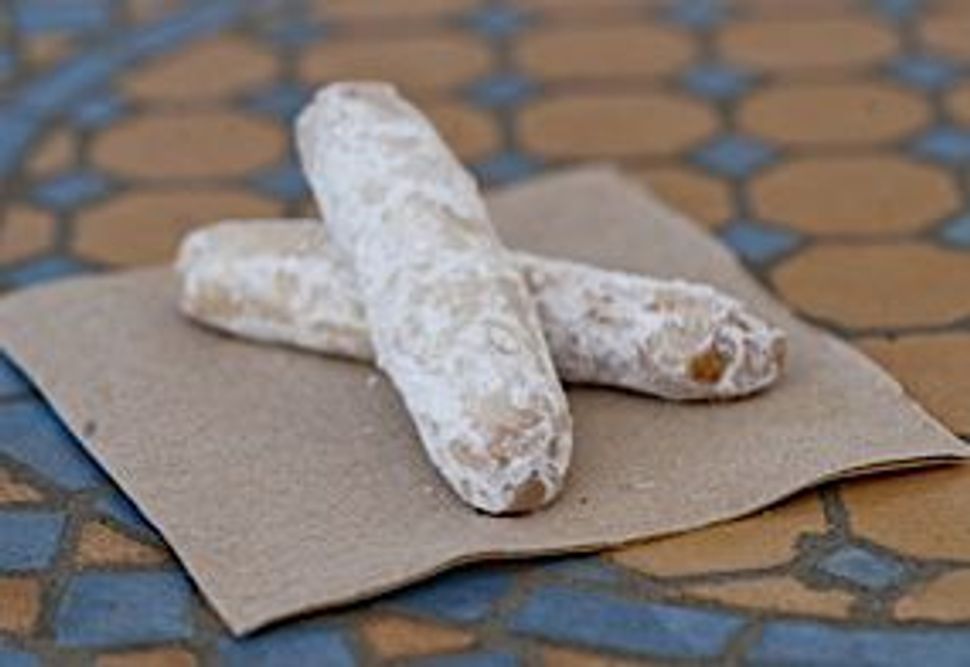 It’s been over two decades since Zohar Zohar, the dark-haired, soft-spoken owner of Zucker Bakery, a new Israeli pastry shop and café in the East Village that serves Jewish delights, has lived on Kibbutz Sarid in northern Israel. She grew up there with her grandparents and parents (most of her extended family lived in Czechoslovakia and died in the Holocaust), running around the grounds with playmates as a child and working in the kitchen, cooking rice and chicken for the thousand person community, as an adult. Her most vivid memories were visiting her grandparents, relaxing in their living room and eating homemade cookies. “I think there is something special about the way you feel when you go to your grandparents,” she says. “And that’s the way I remember it.”

Although Zohar, who left the Kibbutz when she was 21, has lived in New York City for 17 years, finished culinary school, worked 90-hour weeks at prestigious restaurants such as Daniel and Bouley and raised two kids, she still craves those moments of being at her grandmother’s house on the kibbutz. With Zucker Bakery, which she opened in September, she’s on a mission to recreate them with treats like rugelach and babka, along with Israeli treats like honey almond fingers, each of which has a personal story behind it.

Some of the bakery — which has already won numerous accolades from New York Magazine, the Village Voice, and Grub Street, and is a finalist choice for Time Out’s best new bakery of 2012 award — is literally taken from her grandmother’s home in Israel. The brown teapot she uses to pour Stumptown Coffee and Chai Tea is from her grandmother. So are the pastel colored pictures on the wall, which were painted by her aunt 50 years ago. The mica counter top, where she packs overflowing boxes of rugelach, lemon bars, and spiced honey cookies, tied with a thin, twine string, is not the original from the kibbutz home, but an almost exact replica. “I remember that from my childhood from my grandmother’s home, and I really wanted to have it here,” says Zohar. “That’s the first thing that started the vision of the place.”

But perhaps more striking are the ways the café invokes the spirit of the Kibbutz. “I grew up in an environment where everybody knew everyone,” Zohar recalls. It was a place that felt “very comfortable and safe…It’s not very New York.” Looking around the café it is obvious that Zucker Bakery’s customers feel similarly. Three students sit at individual tables and couches that all face each other, reading, playing on their computer, and talking. (The couches, with blue and white floral cushions, and the chairs, with lace, cloth napkins lining the back, add to the “Grandma” feel.)

When a middle-aged man walks in, Zohar greets him by name and asks him what he feels like eating. Because there are no signs listing the menu or describing the pastries, people have to ask questions about the selections and engage in conversations explains Zohar: “I want people to have to interact. I don’t want it to be like other places where they can come in and not say something or make eye contact.”

For many customers the sweet selection seems strange. “Israelis who come into this space would know 90 or 100 percent of what is in this case, but Americans wouldn’t,” she says. But they are all recipes that are personal to Zohar. About the Alfajhores, a Dulce De Leche-filled cookie sandwich rolled in coconut flakes, Zohar writes on her website, “This dream cookie’s secret family recipe was given to me by dear Sima — a gifted baker, amazing person and the mother of our good friend.” The honey almond fingers are a recipe from her grandmother, the love loaf, (a loaf of mixed dried fruit and nuts) a treat from “her dear mother’s oven,” the challah bread, something she used to make made every Friday on the Kibbutz from a young age.

“There is such a huge connection between food and memories,” says Zohar. Especially for Jews, so when a young woman, a stranger, asked her if she would keep family heirlooms in the bakery so others could appreciate them, she agreed. Zohar displays these espresso cups and serving trays, as if they are her own treasures.

It is clear that although Zucker Bakery (Zucker is Zohar’s maiden name as well as the German word for sugar) was originally as a vehicle to express Zohar’s nostalgia, but she views it as a place for others to invoke their own memories. “I get reactions from people who tell me that this reminds them of their grandmother or mother,” says Zucker. “Finally, they get another taste of that flavor, which in many cases they can’t anymore…”

Dough: Put room temperature butter and sugar in mixer mix well add eggs one at a time then vanilla And orange juice. Mix flour and baking powder then add to butter mix. Wrap in plastic and refrigerate for at least 2 hours.

Filling: Cook everything over low heat for 5 minutes then chill.

Assemble: Roll out the dough 1/4 inch thick. Cut out circles with a glass or a cookie cutter put in a teaspoon full of filling and close to the hamantashen shape. bake at 350 for about 25 minutes or till golden brown. When cold can be sprinkled with powder sugar.