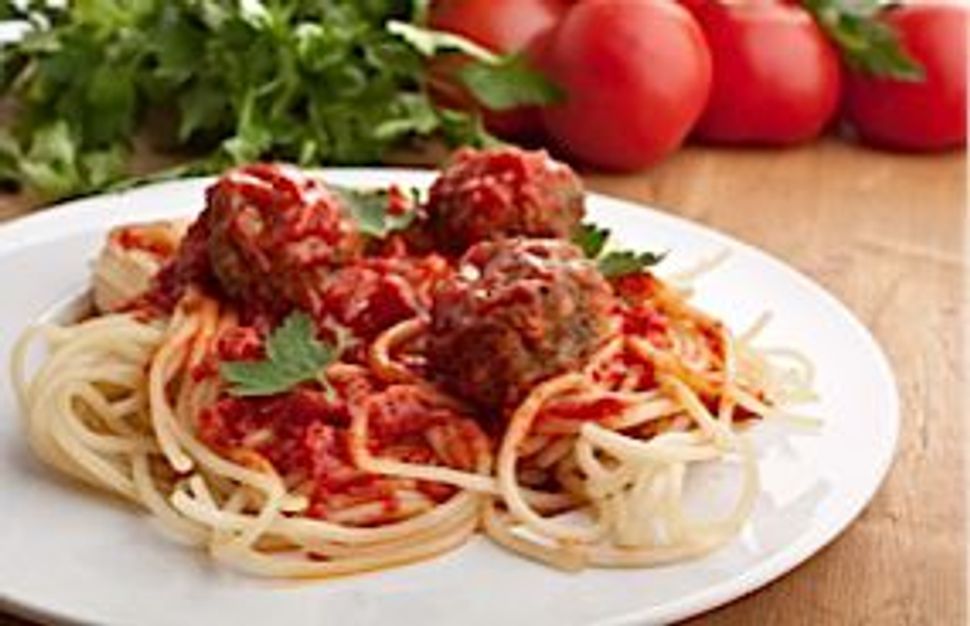 Spaghetti and meatballs: the perfect Shabbat meal. My lawyer father worked brutal hours early in his career, and though we didn’t eat dinner as a family every night, on Friday we waited until he finished with work, made it through rush hour traffic, offloaded his briefcase, snapped open a bottle of beer and plopped down to eat. The meatballs would simmer away patiently, soaking up sauce and getting only more delicious as we waited.

When finished, they were spooned over bowls of whatever noodles we had in the house. Sometimes it was spaghetti and sometimes it was cappellini, but if it was linguini, my father might muster his best Felix Unger and say: “It’s not spaghetti, it’s linguini!” We’d laugh, recalling the scene from “The Odd Couple” in which Walter Matthau, at his wit’s end, throws Jack Lemmon’s plate of noodles at the wall and proclaims, “Now it’s garbage!”

Fortunately, my mother’s meatballs — “Mommy meatballs,” as we called them — weren’t garbage, and we all got a chuckle from the irony. They were, in fact, extraordinary. My mother might make a half-hearted attempt at modesty, but would always yield in the end to our praise, which we readily heaped upon her year after year. We swooned for them, ensuring she prepared batches two times too large so leftovers could be snuck from the fridge after hours. These were the meatballs by which all other meatballs were judged, and if a friend ever bragged about his mother’s version, we’d sit quietly, smug with the knowledge that we knew better.

But, when I asked for the recipe this year to recreate it myself for the first time, I was surprised by the ingredients. It was much simpler than I had anticipated. And, it became clear my mother is a baby boomer with a baby boomer’s affection for canned this and dried that. The list included powdered garlic, Kraft seasoned Italian breadcrumbs, and Ragu tomato sauce. When I asked my mother if she’d used organic meat and eggs, she laughed.

This recipe is as dated as “The Odd Couple,” I thought. Resolved to put a modern spin on my mother’s classic, I set out to Whole Foods. In place of powdered garlic I selected fresh garlic, I substituted fresh-made breadcrumbs for the canned variety, and purchased the freshest organic grade meat and eggs the store could offer. I was about to buy ingredients for fresh tomato sauce, when a call from my mother stopped me.

“You’re going to want the Ragu,” she told me plainly. “That’s what you’re used to and you’ll miss it if you don’t use it.” After some protesting, I relented, somewhat annoyed. Whole Foods doesn’t even carry Ragu, and neither does my neighborhood Brooklyn market. I eventually tracked down a few bottles at a grungy nearby bodega, much to my chagrin. “Ugh,” I sighed to myself. “I’m cooking food from a bodega.”

At home, I prepared the dish according to my mother’s recipe, swapping in my new ingredients for her old ones. After simmering on the stovetop for an hour or two, I conducted a taste test.

The meatballs were good, to be sure. The small chunks of garlic gave it a kick, and the fresh breadcrumbs rounded out the fattiness of the meat. But, I knew neither were the reason the dish tasted so good. It was the darned Ragu, delicious as it ever was.

“I knew you’d want Ragu,” my mother would tell me later, triumphantly. “So what if it’s not fancy. It tastes like home, and that’s why you like it.”

1) Mix all but the sauce together in a bowl. Add an extra egg if the mixture is too dry, or more breadcrumbs if too wet.

2) In a large, heavy-bottomed pot, bring tomato sauce to a boil then reduce heat to just below a simmer.

3) With the meat mixture, make small balls about 2 inches in diameter. Drop them, raw, into the sauce. Stir frequently, but gently, from the bottom, watching to make sure that the bottom doesn’t burn. Let simmer on low heat for an hour or up to two. Serve over pasta.