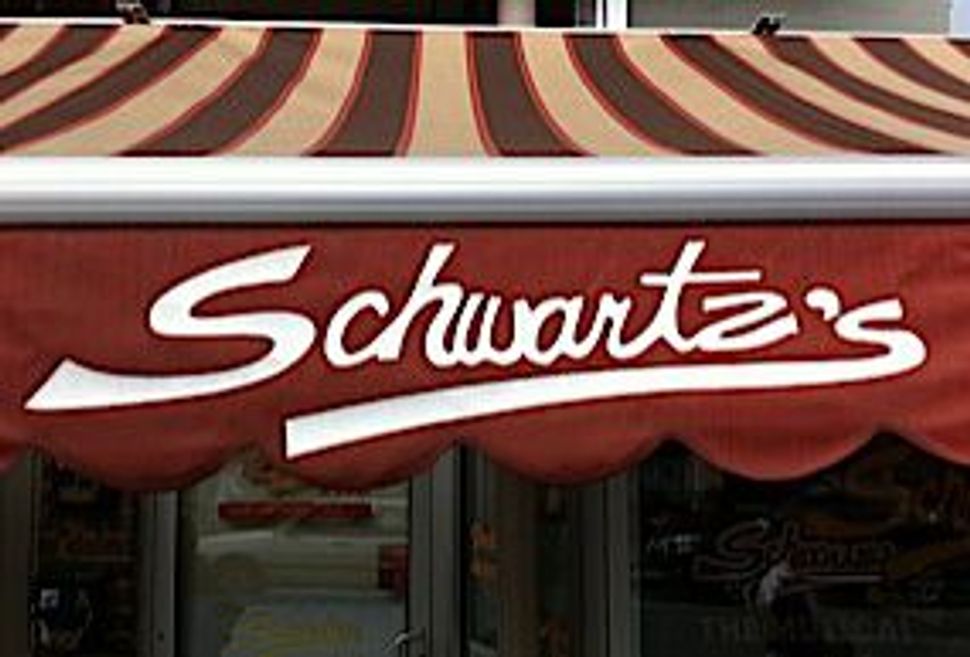 The sky didn’t fall, the earth didn’t stop turning, and most importantly, the smoked meat didn’t stop coming from the cramped galley at Schwartz’s, the legendary Montreal deli that was sold yesterday to a group of investors including Mr. and Mrs. Celine Dion.

As the Forward reported last month, news of Schwartz’s pending sale sparked rumors of – horrors! – franchises and brand extensions. But Schwartz’s officially changed hands Monday afternoon, according to the Montreal Gazette, and new owner Paul Nakis, who leads a consortium of investors, has pledged that there are “absolutely no plans to franchise” the deli.

Hy Diamond, who bought Schwartz’s in 1999 and sold it to the group, said he will “coach” the new owners on the running of the place, according to the Gazette.

“I think, despite the reassuring no-franchise words from the new owners, that there is a degree of trepidation,” Brownstein told the Forward. “People think that for a sale of nearly $10 million, they may have something up their sleeves. But then again, Montrealers are a cynical bunch — and for good reason.” When some of the same investors owned Nickels, a local smoked meat chain in the 1990’s, not everything went well. Still, says Brownstein, Schwartz’s loyalists may not have to worry. “If they leave it alone, nothing will change,” he said. “The only difference may be customers coming in looking for Celine Dion.”

Tamara Kramer, producer of Montreal Jewish radio program “Shtetl on the Shortwave,” agreed. “I don’t think it matters whether Jews are the custodians of this historical eatery,” she told the Forward. “I think it’s just about maintaining the restaurant the way it is. Other people seem to think that the purchase of the deli by Celine Dion’s husband is the death knell for Schwartz’s. I don’t really get why.”

Regardless of ownership, Kramer said, “Schwartz’s is a point of pride for Jews of Montreal. Lots of us grew up going there and whether we partake in the smoked-meat-and-cherry coke festival or not, it’s a part of our identity as Jewish Montrealers.”

Another Canadian deli titan, Toronto’s Zane Caplansky, said he remained optimistic that Schwartz’s will stay true to itself. “The new owners know what Schwartz’s means to Montreal and to Canada. I’m sure they’ll honor the tradition they are now part of,” Caplansky told the Forward. Caplansky himself dishes out smoked meat in Toronto from his namesake Kensington Market deli and from his food truck, Thundering Thelma.

“I love Schwartz’s,” Caplansky said. “The food is wonderful as is the service and atmosphere. It is a palace of deli. I have never been disappointed there and only in my wildest dreams do I think I could aspire to be what they are.”