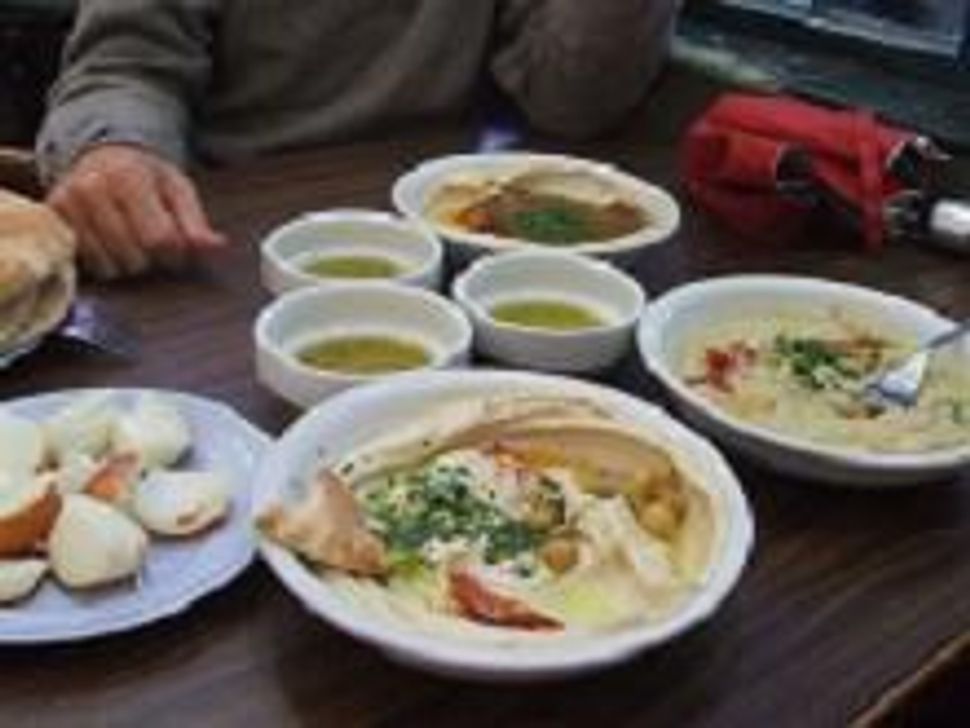 My first date with my husband was at Hummus Place, a small Israeli owned restaurant in New York City’s Greenwich Village. At that point, I thought I knew what hummus was: a healthy chickpea spread we’d buy in college to dip baby carrots in or spread on bread for sandwiches. What else was there to know? Well, according to my Israeli date, a lot. Lucky for me, I had him, a dedicated hummus “connoisseur,” to show me the error of my foolish American thinking.

Our server, like all the servers, seemed to have just emerged from some sort of magical Tel Aviv-New York pipeline hidden in the restaurant’s kitchen. I watched my future husband order for the two of us in Hebrew with relief, because really, I had no idea what I wanted despite the limited menu, which featured four different types of hummus. He chose hummus masabacha (hummus with whole chickpeas and tahini) and hummus ful (hummus with fava beans). The hummus ful came with a sliced hardboiled egg, and both were served warm with a smattering of olive oil, paprika, parsley and a little zing of spice. Also available was the classic hummus with just tahini or hummus with mushrooms.

Next I learned to properly eat it—with a swab of pita (Never with a fork!), and the meaning of the Hebrew verb “lay-na-gev” (to wipe) that is used when talking about the consumption of hummus with pita. I believe my response to the food was fairly similar to most folks’ responses to tasting fresh Israeli or Arab style hummus for the first time: I didn’t quite know what to make of it, this huge plate full of hummus, served to me like a meal. It seemed off, almost like being offered a bowl of guacamole for lunch. Even so, I ate it and ultimately enjoyed it. Walking away, I remember giggling as he corrected my pronunciation, saying it’s “hummous” and not “*hummus.” Right, right. Of course.

As I got to know my future husband and the culture of Israel better, I gradually began to understand the phenomena of hum-mous versus hum-miss. Hum-miss (or hummus, as it is usually spelled in the USA) is what folks buy at Whole Foods or Trader Joes. They enjoy it on sandwiches that often involve sprouts; they demurely dip veggies into it. Sometimes they buy roasted red pepper hummus or other such specialty styles. Hummus comes in a small container and people slowly eat it over the course of one or two weeks. They rave of its health benefits: its low calorie content and the nutritional punch packed into one mighty chickpea. Indeed, hummus has become something of cultural identifier in the USA, akin to eating tofu or shopping at farmer’s markets. Not sure what to talk to your yoga teacher about when you run into her at the grocery store? Ask her about her favorite brand of hummus.

But hum-mous is a different food entirely. It is hearty and filling and cheap. It is served warm and a bit spicy, and eaten with pita or raw vegetables. It is a meal in of itself and it’ll keep you going all day. It is the food of the people, and it is entirely unselfconscious. From the refrigerator of a bachelor to the refrigerator of an orthodox family, hummus is there. People buy it in kilogram tubs, or they go to special hummusiyas (hummus restaurants) to eat it fresh. Indeed, where to enjoy the best fresh hummus is something of a national obsession, with claims ranging from Acco to Yaffo to Ramle. Israelis abroad become indignant at Westernized attempts at the stuff, scoffing at the dainty dips and the silly sounding “flavors.” Sometimes, they come across just a tad bit ridiculous. From your Israeli yoga teacher to her grandmother to Bibi Netanyahu, everyone’s got some in their fridge.

We’ve now been living in Israel for two years and my appreciation for hummus, that earthy, delicious, and deeply satiating food has grown tenfold. I can even admit to getting a little ridiculous about its sanctity. I turn my nose up to the processed stuff, at times refusing to eat it from a restaurant if I can taste that it came from a tub. Whenever we have visitors here from home, we take them to our favorite spot, Abu Hassan, in Yaffo. Our guests always enjoy it, but they never seem to relish it quite like we do. The simple truth is that it takes time to “get” this strange new food—as new it ultimately is, sharing almost no similarity to that other chickpea based food available at Whole Foods.

Cindy Katz is an ex-New Yorker living in Ra’anana, Israel. She likes to write about what she eats and where she goes in Israel, and she also coordinates a women’s program for Darfuri refugees in south Tel Aviv.