Knishes and Empanadas in Buenos Aires 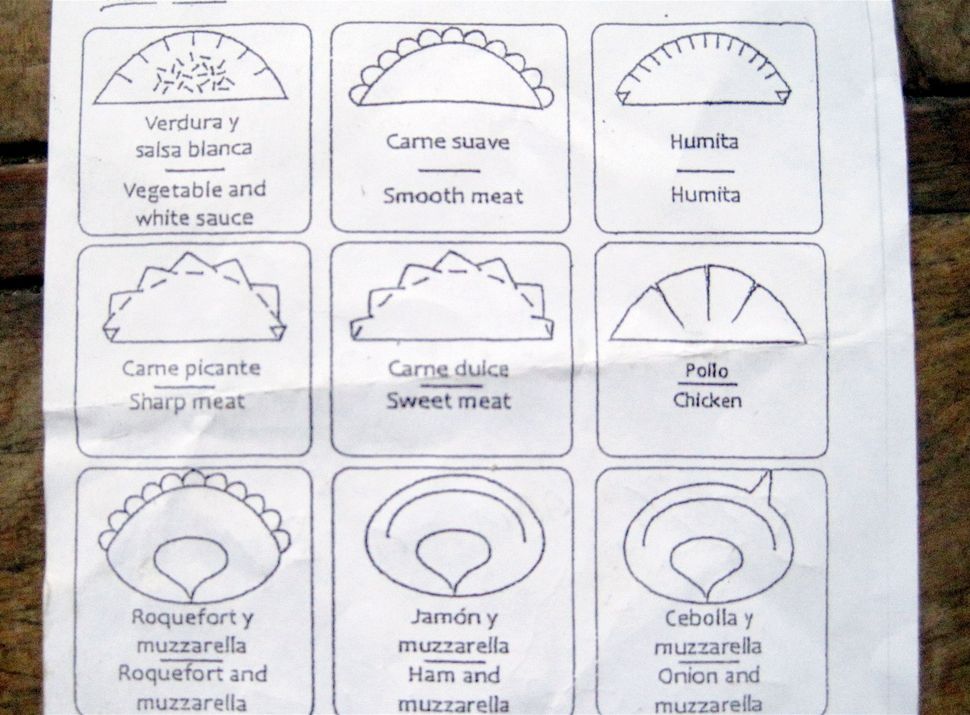 What kind of empanada would you like? Image by Alyssa Bauer

When I arrived to Buenos Aires, I was impressed by a bustling city at the intersection of Latin America, Europe and the United States. One can find beautiful French architecture housing Peruvian-owned fruit and vegetable stands and a dialect that more closely resembles Italian than the Spanish of South America. As a vegetarian in a city that boasts the best beef in the world, I found myself scouring the local cuisine for something I could figuratively and literally sink my teeth into. Empanadas proved to satisfy my desire for street food. The main vegetarian options offered Swiss chard, cheese and onion, Roquefort cheese, and corn with salsa blanca.

Yet as I explored Buenos Aires’ Jewish neighborhoods, I found comforting culinary similarities with home including hummus, gefilte fish and knishes. Amongst its cultural intersections, the city is home to the largest Jewish community in South America. Similar to New York, Buenos Aires welcomed a large Jewish immigrant population starting in the mid-nineteenth century. An array of traditional recipes accompanied the wave of immigration, which introduced such foods as knishes to the Buenos Aires gastronomical spectrum.

How can these two kindred food offerings, empanadas and knishes, co-exist in one city? What does the knish offer that the empanada is unable to provide, and vice versa? From the mere description, empanadas and knishes are quite similar: leavened dough stuffed with traditional, hearty favorites that are then baked or fried. Both were brought to the Western Hemisphere and popularized as working class favorites as they became a portable and affordable lunchtime staple.

Although the empanada and the knish have technical similarities, the histories of these tasty favorites are specific to their cultural creators— the immigrants of Eastern Europe and Spain. Knishes, which comes from the Yiddish word knish meaning a kind of bun, were brought by Jewish Eastern European immigrants to Argentina. Sold on the street to immigrant workers, knishes were a visible sign of the culture in the Jewish neighborhoods of Buenos Aires. Warming recipes including potatoes and onions, cheese or meat adhered to tradition from the old country.

Since the nineteenth century, the knish has remained a symbol of Jewish cultural and familial tradition. As writer and knish historian Laura Silver indicates, the knish is a “catalyst for talking about memory, mourning…a vehicle for nostalgia.” Knish recipes and techniques represent ties to both family and tradition. As food of nomadic, immigrant Eastern European Jews, knishes hold a signifance for Jewish communities all around the world

The empanada, on the other hand, is a symbol of a national or local identity. Unlike knishes, the story of the empanada is not about displacement, but rather popular heritage. Originally from medieval Iberia, “empanada” comes from the Spanish word empanar which means to coat or wrap in bread. Spanish colonists introduced empanadas to Buenos Aires in the seventeenth century and the recipe eventually spread with colonization throughout the region. Empanadas have been made and eaten in Buenos Aires for over 300 years which grounds the empanada in the history of the local culture.

Empanadas were traditionally stuffed with meat or fish, including chorizo, chicken and tuna. Today, nearly every province in Argentina claims a traditional technique and several accompanying recipes, In Buenos Aires alone, there are roughly fifteen varieties of empanadas offered, each folded differently in a repulgue or pattern to indicate its specific filling. Recipes specific to the city of Buenos Aires include ham and cheese, spicy minced meat, humita with cornmeal, and caprese.

The main difference I have found between empanadas and knishes in Buenos Aires is the story of their traditions. Empanadas have a story of continuity, which places them in the national imagination of Argentina. The empanada is not a nostalgic food. On the other hand, the story of the knish reflects the story of a Jewish people and reflects the ability for tradition to exist through centuries of displacement. In Buenos Aires, both the empanada and the knish functions as culinary, cultural artifacts with affective histories that contribute to an appetizing assortment of flavors. Just don’t ask me to choose a favorite.

Alyssa Bauer is currently living in Buenos Aires, Argentina working with organic city gardens and keeping a blog about communities and food politics.

Knishes and Empanadas in Buenos Aires