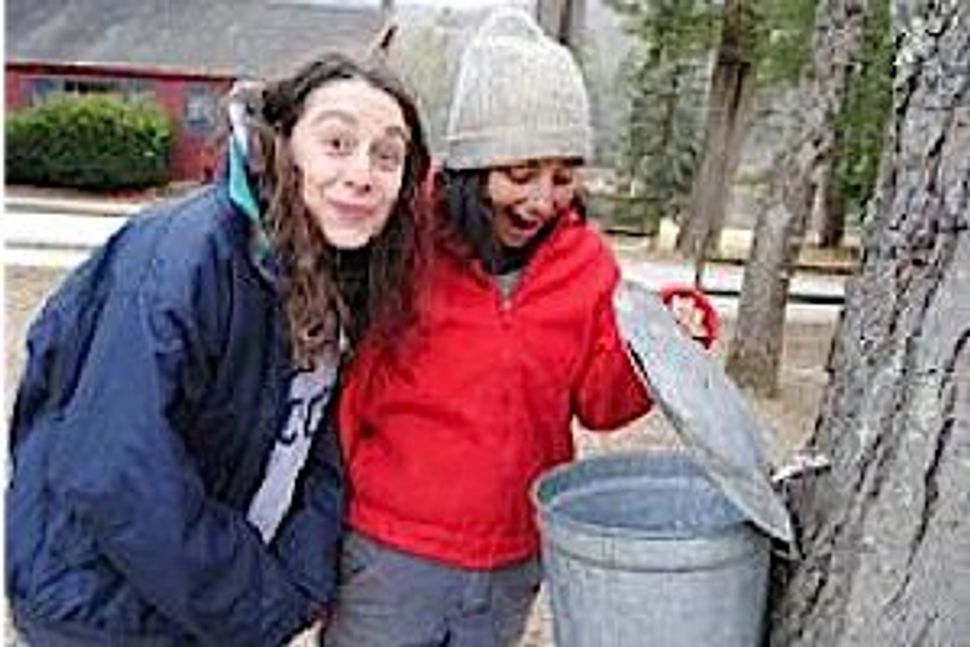 Appropriately, on the night of Purim the trees couldn’t tell the difference between good conditions and bad conditions. Thursday morning, I did a mad dash to collect all the sap before the buckets overflowed.

I tapped my first maple tree one month ago, and have since been learning the sugar maple tradition of harvesting sap and turning it into sweet and intoxicating syrup. As a new farmer in the northeast, tapping maple trees is part of my heritage. And as a member of the Adamah community in Falls Village, CT this heritage is being reawakened and practiced in a Jewish way. I hope everyone reading this gets to tap a maple tree and collect the clear and delicately sweet sap that runs promptly- if tapped on a day with “good flow”- from the spout.

When I stand looking at a huge Sugar Maple, it’s hard to conceive not only of what’s hidden under the bark but how to turn sap, with its ninety-eight percent water and two percent sugar, into the thick syrup that I simply can’t live without. In fact, it’s a pretty simple process. It looks like this: drill a two-inch hole in a maple tree, insert a metal spout, hang buckets and lids from the spout, and wait. I check the buckets and collect the sap every day until we have at least forty gallons, which can take less than a day. Then we boil and boil and boil over a huge fire. The evaporation pan lets go of a sweet mist and eventually those forty gallons become two gallons. Finally, after finishing the syrup on the stove, the magic is complete and we’re left with one gallon of decadent syrup. It’s a simple process but a lot of work and it’s all in the name of that sticky golden liquid that pairs well with just about anything- even an empty glass- Maple Syrup.

I’m sure Jews have tapped maple trees and made syrup before but at Adamah this is part of our community tradition, unique and distinctly Jewish. This year, the timing was particularly Jewish: we made our first tap on Tu Bishvat and this final Purim-inspired sap surge may be our last big collection of the year. We also give thanks in a special way. Adamah Sugarmakers before me have deliberated over the appropriate prayer to say over the golden liquid. Should we say a different prayer over sap than syrup? It seemed the general blessing, Shehakol, wasn’t enough for those who have experienced the joy of sugarmaking. This sap is not just a product off of a tree; it is the ‘lifeblood’ of the tree. Because of this, we gather to mark the first boil of the season and say the blessing borei mei ha etz, meaning,* creator for the waters of the tree*.

I’ve been learning from Jamie Sadeh, a member of our community, along with her daughter Ibby about all the intricacies of tapping maple trees, and tapping with Ibby is teaching me about what it means to be a sugarmaker in a Jewish community. Ibby and Jamie are always helping with the sapping and, of course, Ibby is our main taster. This is her third year tapping maple trees, she’s turning four in April. For Ibby the tradition of maple sugaring has always been done in a Jewish way. Ibby will know that the scar lines inside the tree, which form after the sap season is over, tell the past and indicate to future sugarmakers where they should drill. She will know, along with anyone who passes through Isabella Freedman during the flow, the blessing over syrup and it will be a Jewish tradition when they taste each new batch. Here at Adamah sugarmaking has been undergoing a transformation. We have taken the annual farming practice of tapping Sugar Maples, infused it with the character of Purim and marked this seasonal event communally and with a prayer of thanks. This is what it means to farm in a Jewish way.

Mira Schwartz has been working in vegetable production since 2006. She was the field apprentice with Adamah in 2011 and is very excited to have had the honor of being the “Sap Queen” this winter. Adamah is now accepting applications for the Adamah Farm Fellowship.