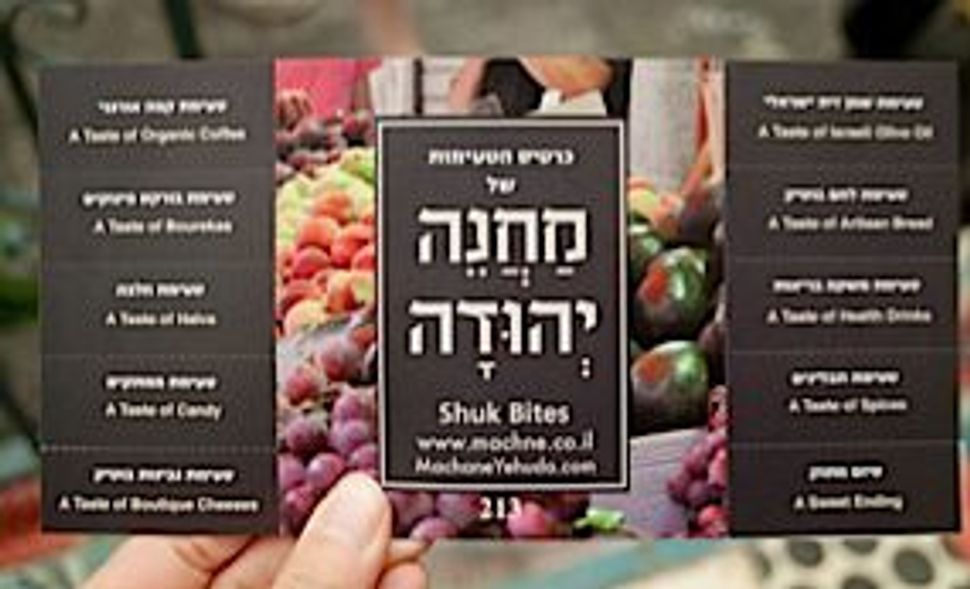 In recent years the market has experienced a renaissance and so today trendy bars and coffee shops are nestled between second and third generation butchers and fishmongers. For those who want an insider’s view of the shuk but don’t know where to start, a new website called Machne and self-guided tour called Shuk Bites seek to enlighten you.

A self-guided tour of Mahane Yehuda, Shuk Bites, was released in December. Participants buy a ticket ahead of time on the Machne website for NIS 99, or about $25, then pick it up at the shuk. It comes with a map and 10 vouchers for different places around the market. While they offer a suggested itinerary, the route is entirely up to each person and can be done over one day or several visits. Indeed, it has the feel of a culinary scavenger hunt.

Michael Weiss and Reuven Pilo, both native Jerusalemites and tour guides, created Machne (local shorthand for the market) and Shuk Bites with the hope of making the shuk more accessible to visitors. Although culinary tourism is blowing up in Israel, they found that there were no regularly scheduled tours of the market. Pilo, who owns a boutique tour company, was getting a lot of requests for single travelers and small groups, which can be difficult to accommodate. So they came up with a way “to have small groups experience the best the market can offer without having to rely on a group,” says Weiss.

They started by creating Machne, a comprehensive website for the shuk. It offers an interactive map of Mahane Yehuda, complete with descriptions of the various stores and vendors on each street.

Once you get off the site and to the market, stops on the Shuk Bites tour include a cup of organic coffee at Café Alfonso, tastes of cheese from famed Basher Fromagerie, flaky burekas with hard boiled egg at Chochmat HaBourekas, and a sampling of spice mixes from esteemed spice shop Pereg Tavlinim. Weiss says that while travelers may find these places on their own, “It’s another experience to walk around the market with the ticket and understand the color of the market, the different stories and unique characters. We want to bring this up to the surface.”

Pilo and Weiss are cheerleaders for Mahane Yehuda (“I’ve been all over, and you don’t have market like Mahane Yehuda,” says Pilo) and they hope that their site and tours will act as a gateway to the shuk. More than anything, they want to bring attention to the shopkeepers who make it such a special place.

In addition to Shuk Bites, which is best for individual travelers and small groups, Machne also offers themed boutique culinary tours in the market as well as the Old City. They are rolling out culinary offerings in Tel Aviv soon as well.