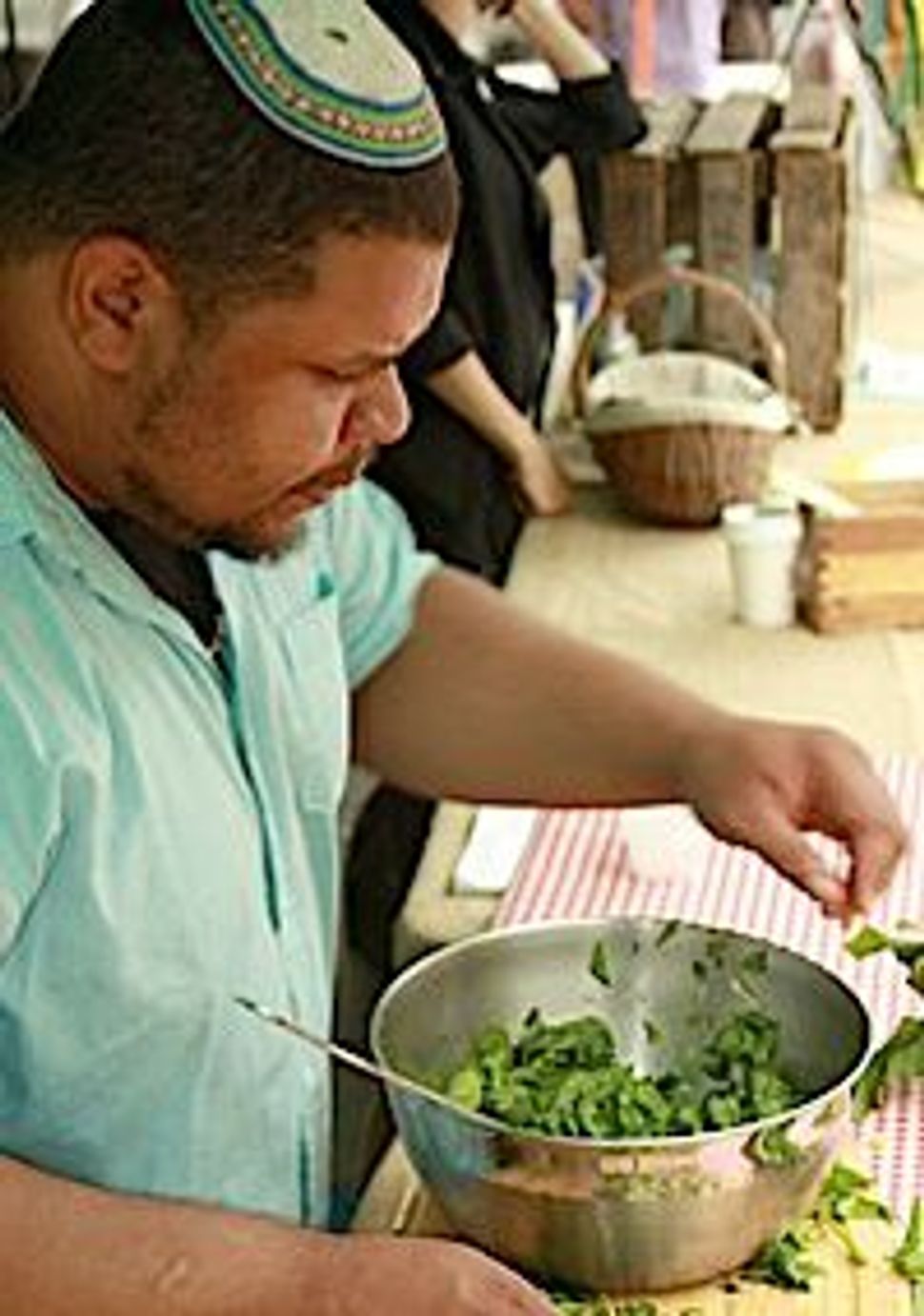 More than 100 people had come in. The chef’s eyes widened theatrically. “It’s mamash a nais!”

“Truly a miracle” — as an estimation of the turnout for “Kosher/Soul,” Michael Twitty’s lecture and cooking demonstration at the Jewish Museum of Maryland — might be hyperbole. After all, with a title like that, and a menu boasting black-eyed pea hummus and egg rolls with turkey pastrami and collard greens, who wouldn’t want to be there if they could? But the back story is no small wonder.

A gifted raconteur from a family of avid cooks, Twitty introduced himself and primed the audience’s salivary reflexes by conjuring the image of a food: warm buttered challah with peach jam. A staple of his childhood Saturday mornings, it contains the basic ingredients of his family’s story: his grandparents’ southern roots and northward migration; his childhood in Cincinnati, where communities of transplanted Southern Blacks, White Appalachians, and Jews lived in close proximity (his mom got the challah at a Jewish bakery on Fridays); and his own early inklings of an affinity for Yiddishkeit, detected first by his taste buds.

Many years would pass before an uncle, “bitten by the ‘Roots’ bug,” traced the family’s genealogy and discovered Jewish ancestry, and more years still before Twitty’s conversion to Judaism. But already as a child he felt the pull.

Today Twitty is not only Jewish but an expert in the foodways of Jews as well as of Africans and African Americans. Telling stories through food is at the heart of his multifaceted career as a culinary historian, historical re-enactor, heritage gardener, blogger (afroculinaria.com and thecookinggene.com, day school Judaics teacher and chef.

When he’s not poring over an heirloom seed catalogue with residents of the Hebrew Home of Washington, D.C., to learn about the foods they remember from the Old Country, or preparing antebellum dishes in the guise of an enslaved cook at Robert E. Lee’s plantation, he may be using a page laid out like the Talmud to teach his high school students about kosher slaughter and how to make chicken soup. At present he is making plans for a food history tour of the South, where he hopes to say Kaddish at his ancestors’ graves and to cook and eat with descendants of the families who enslaved them — some of whom are also relatives. Storytelling through food is common to the heritages of Africans and Jews, he said, two “antique peoples whose histories are braided together like a challah.”

A series of internships with the Smithsonian as a researcher for the Folk Life Festival led to Twitty’s discovery that food could be taken seriously as a subject of study. As he told curator Karen Falk last year in an interview for the Jewish Museum of Maryland’s “Chosen Food” exhibition, the history of food provides “a way to talk about the Shoah and talk about slavery in a way that muted some of the grotesque and highlighted the survival and human spirit aspects.”

That research also led, circuitously, to Twitty’s conversion. When he told the Smithsonian he would like to be a presenter in the Jewish section of the Festival’s Food Expo, “this got a lot of stare.” Nevertheless, he landed the job and networked his way into learning challah baking from Joan Nathan of “Jewish Cooking in America” fame. He told Nathan he wanted Sephardic representation at the Expo, and she sent him to see the rabbi of Congregation Magen David in Rockville, with whom he would eventually convert.

Having taken on Sephardic customs with his conversion, he is among the lucky observant Jews who can eat rice, corn, and legumes during Pesach. But he doesn’t take it for granted; he eats Carolina Gold, the rice that came to America with enslaved Africans, whose cultivation of it turned their owners into millionaires. That choice echoes the complexity embedded in the commandment to eat matzo, which is known as both the bread of affliction and the bread of freedom.

Matzo may be the prototype of Judaism’s use of food as a vehicle for meaning, one of the faith’s best-known features. But “edible scripture,” as Twitty calls it, is also found in traditional West African culture.

“In Senegal, when you want the holy man to give a blessing to your business, you must first give tzadika. Sound familiar? You have to make a pot of black-eyed peas and rice, and go sit down with a hungry person, and feed it to him.”

“In Judaism,” he added, “we pray, ‘May what I have be sufficiently blessed that I feel its abundance.’”

(To learn more about Michael Twitty’s Southern Discomfort Tour, which will explore the culinary genes of southern cuisine and his family click here)