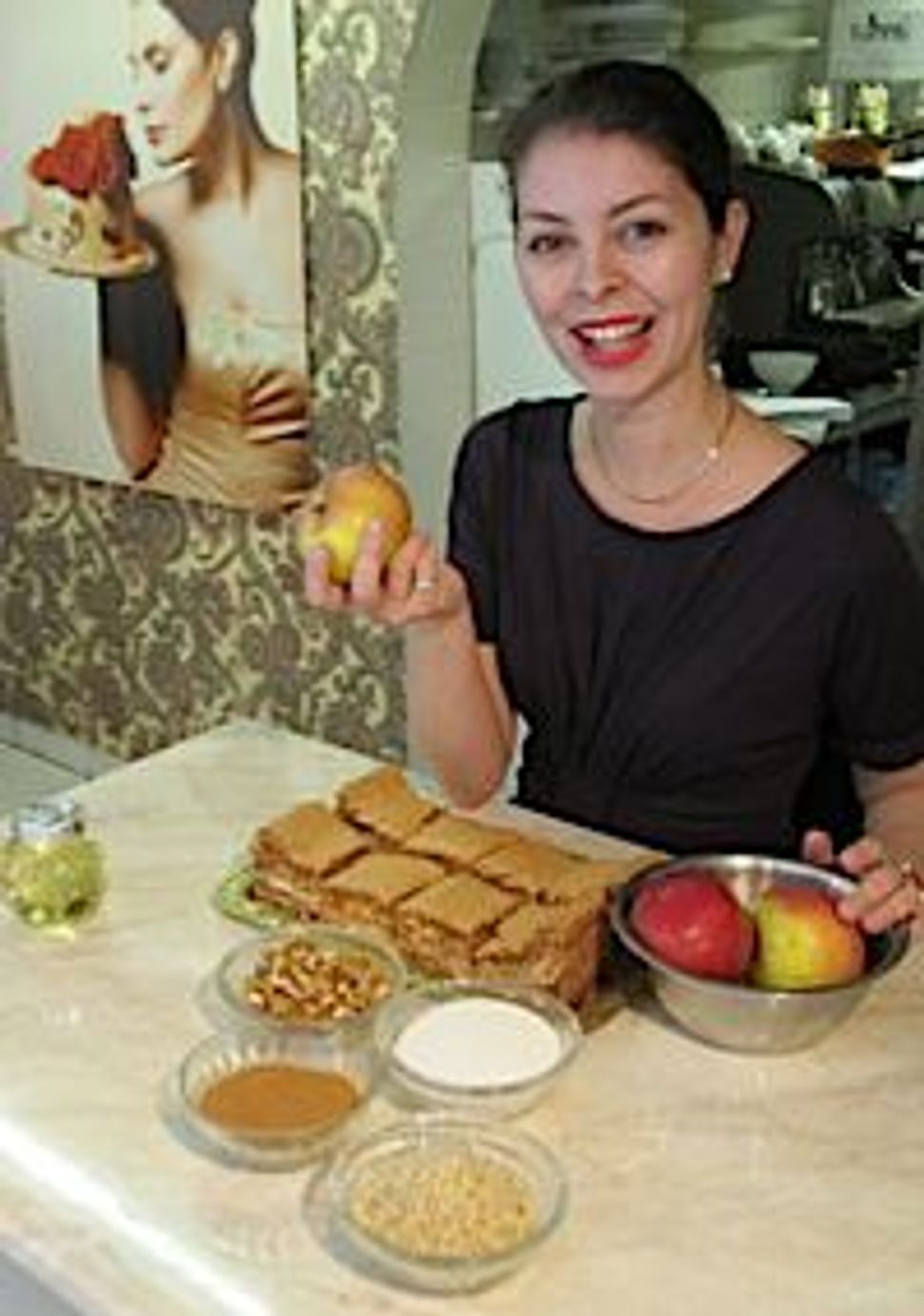 Rachel Raj is one of the queens of Budapest Jewish cooking. The daughter of a noted rabbi, she authored a food column for a local Jewish magazine, makes guest appearances on TV talk shows, and a few years back anchored a 10-part series on Jewish cuisine on a leading Hungarian food channel.

Writing in Saveur, David Sax described her as a “high-octane food television host” who is the Hungarian equivalent of her American near-namesake Rachael Ray.

Model-thin and with long, dark hair, Raj, 31, prefers to describe herself as a modern-day Yiddishe Mamma. “Not someone who sits in a chair and says ‘eat,’” she says. “I like to dress up, I have a profession, I have two young kids — but on Shabbat I serve a four-course Friday night meal.”

She and her husband, Miklos Maloschik, operate two kosher-style cake shops in downtown Budapest: Tortaszalon, near the Danube, and Café Noe, a tiny patisserie snack bar in the heart of the old Jewish district — right next door to a Judaica shop run by Rachel’s mother, who herself is the author of a Jewish cookbook.

Tortaszalon and Café Noe both specialize in traditional Jewish desserts such as flodni, a famously calorific layered concoction of apples, nuts, and poppy seeds that is one of the symbols of Hungarian Jewish cuisine. Rachel’s version is arguably the best in town.

A week before Pesach, she went on national TV to show Hungarians how to make another one of her specialties, matzo apple cake.

She lined a pan with wine-doused matzo and then alternated on top of it layers of grated apples mixed with sugar and cinnamon, more matzo, and a sweet filling made of beaten egg whites and ground walnuts. Baked, cooled and cut into squares, the resulting confection is a rich but surprisingly light indulgence.

“It’s ‘flodni lite,’” she joked a few days later, as she served me a slice to sample.

Rachel’s flodni is the star attraction in her patisseries, but she and Miklos sell matzo apple cake and also a heavier Passover cake with matzo meal, chocolate, coffee and walnuts, year round. The recipes are Rachel’s but a staff of professional bakers produces the goods.

“We take old recipes and try to make them in a modern way, using natural or organic ingredients as much as we can,” Miklos tells me.

For Passover, Rachel and Miklos symbolically “sold” the cafes to their non-Jewish staff so that the shops stay open.

When we spoke, Rachel was planning the seder menu she and her mother would be cooking: beef in wine sauce “with lots of onions” and a variation on matzo brei as a side dish.

“Crumble the matzo, moisten it with hot water, and then brown it in oil with onions,” she said. “Then mix in beaten egg.”

During Pesach she also likes to prepare another type of fried matzo, a variation on French toast. Rather than crumble the matzo, she takes squares, moistens them to soften a bit, dips them whole in beaten egg to which she adds chopped garlic, chives, onions, parsley or other herbs, and then sautés them.

Rachel says she tries to use her cooking and her extroverted public persona to reach out to the general public, in part to teach about Jews and Jewish life as a means of combating the anti-Semitism many warn is now mounting in Hungary.

She was inspired in this, she says, by her father, Rabbi Tamas Raj, who died in 2010. Rabbi Raj was persecuted under communism but in the early 1990s served as a member of Parliament.

“I call flodni the ambassador of Jewish culture,” she jokes. “My Dad told me that anti-Semitism comes from a lack of knowledge and from fear. To make people change, you have to teach. And I think I can help — I have a good story, and good cake.”