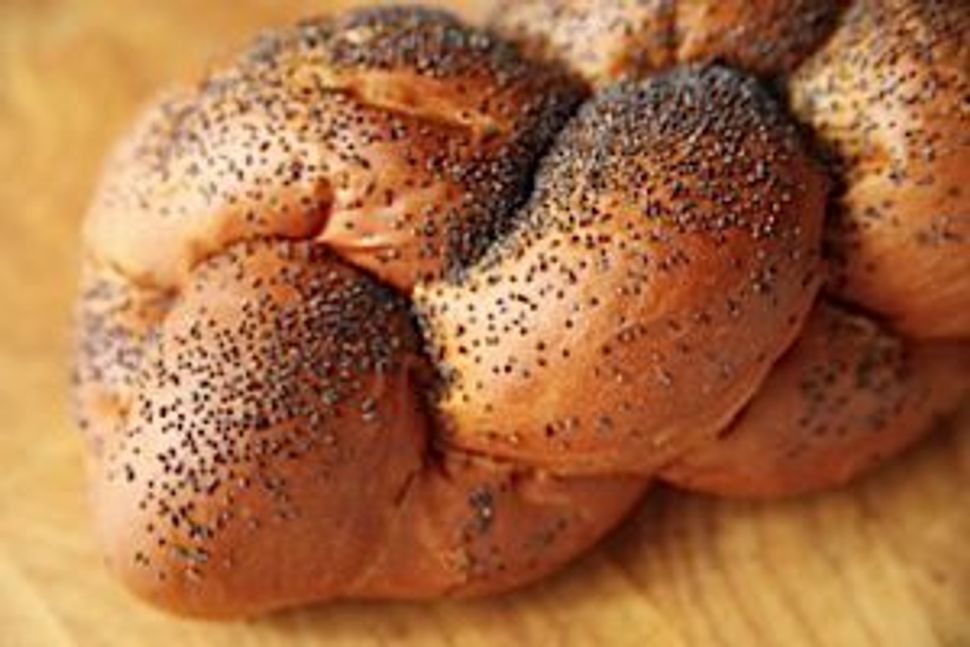 Fridays meant one thing to me growing up: the smell of my mother’s challah. Sometimes I would come home from school, ready for the weekend, and it would already be there — that comforting aroma of bread and honey. I would quickly run to the oven where the bread was baking and check to its color. When it turned the perfect shade of golden brown, I would remove it.

Other times my mom waited for my triplet sisters and me to get home from school before she started baking. We would run upstairs to change, trading our school clothes for t-shirts that would soon be caked in flour. We would pull up benches to the island in the kitchen, and get to work.

First we made the dough, stuffing all the ingredients in the Cuisinart — a part that when I was younger, I feared but my adventurous sister relished. When the dough was complete we split it into long rolls to braid. (Sometimes mom let us separate a little piece to make small Challah rolls just for ourselves). The last touch was to zealously pour egg yolk and decorate poppy-seeds on the bread, which felt like an art project.

Our Shabbat dinners — and my mother’s challah tradition — grew out of tragedy. When my sisters and I were three years old my aunt died suddenly leaving a six-year-old son, Jonathan. It was then that my father suggested we gather the family for weekly Shabbat meals.

Every week my cousins and my grandparents would come over to our home in a suburb of Memphis, Tennessee for a chance to be together and talk about our week. The ritual continues today, 23 years later. Although my generation moved away, pursuing college and careers in other cities, and my maternal grandmother has passed away, my parents and my grandpa still have Shabbat dinner, complete with the challah.

Of course a few traditions have evolved over the year. After our dog climbed on the table one week and ate the challah before dinner, we started giving her some every Shabbat.

The recipe has also changed. My mother originally learned how to make the traditional challah from her sister-in-law. Deciding it should be sweeter, she started added more honey to her recipe. My sister Jennifer now makes the bread from her apartment in New York City. She insists on going through the recipe more slowly than my mom, concentrating on kneading the dough and “putting love” into it, as she repeatedly says. According to her, it tastes better that way, but she’ll probably pass the process on to her kids who will inevitably change it yet again. But what good are family traditions if you can’t make them your own?

1) Put one cup of warm water and the yeast into a Cuisinart. Blend for 20 seconds.

3) Add 4th cup of flour. Process until ball forms on blade about 30-40 seconds. If the dough is too sticky, add a little more flour.

4) Remove dough from the food processor and place it in a well oiled bowl. Cover with saran wrap or a clean kitchen towel.

5) Let the dough rise until doubled, 45 minutes to 1 hour. Then punch it down.

6) Divide in two, for two loaves or leave whole for one large loaf. For one loaf, take about ¼ of dough. Set aside. Divide rest of dough into three balls. Make three ropes and braid. Take the dough that is set aside and make two balls. Make two ropes and intertwine those together. Place on top of braided loaf.

7) For two loaves, make two balls and then make each into braided loaf. Leave off the top piece.

8) Mix an egg yolk and with a little water. Brush on Challah. Sprinkle with poppy or sesame seeds.

9) Let dough rise 30 minutes. Then bake at 350 Degrees for 30 minutes for large loaf and 25 minutes for two loaves. After it comes out of the oven you let it cool or serve warm.