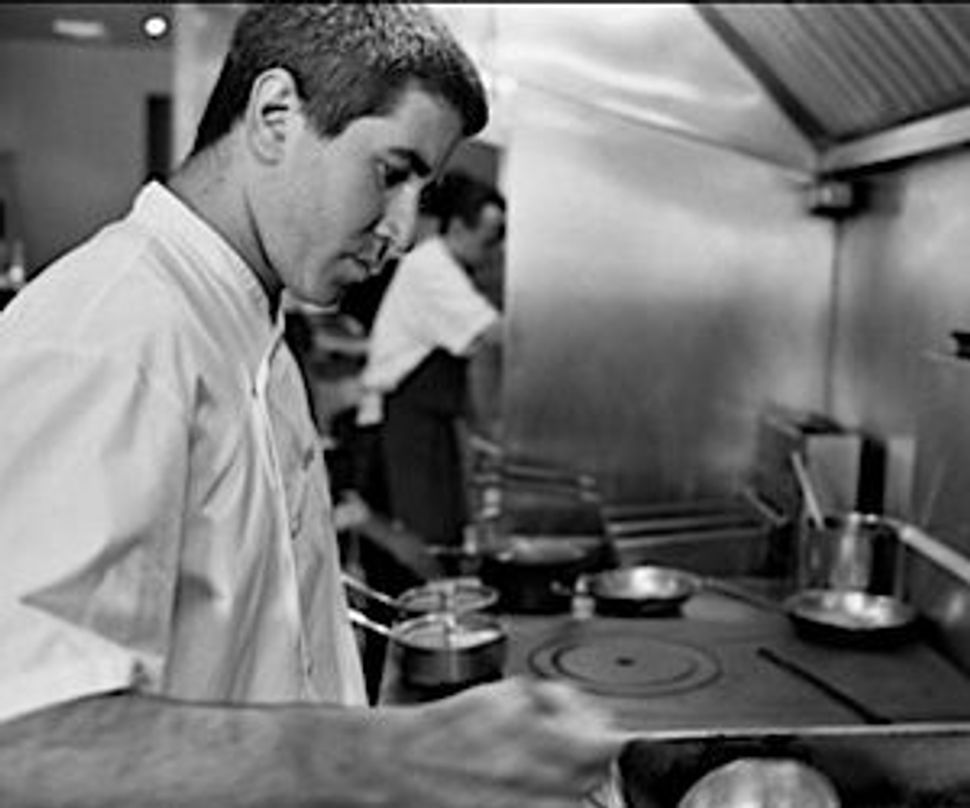 Chef Michael Solomonov has been busy this week trying to get a new passport — and he’ll need it. In a few days he will travel to Budapest and Paris for a week long trip of “More eating than you could possibly understand,” as he describes it, with his business partner Steve Cook and sous chef Yehuda Sichel. This trip — which will include visits to the cities’ Jewish quarters — isn’t a glutton’s vacation. It’s research for their new kosher restaurant Citron and Rose, set to open in Merion, a suburb of Philadelphia, this summer.

Solomonov and Cook already own four restaurants in Philadelphia, including the highly praised upscale Israeli restaurant Zahav. But the food they will offer at the sleek new 75-seat place, Citron and Rose will be the “Other side of what we do at Zahav,” said Solomonov. Instead of concentrating on Middle Eastern and Sephardic flavors, the team will turn their attention to Europe. “You think of pierogies and stuffed cabbage — they’re not so sexy, but there’s great European, Eastern European and Central European food that just needs a platform,” he said. The restaurant will focus on meat, but offer numerous vegetables options as well. Meals will be accompanied by small plates in hopes of giving diners a broad taste of these cuisines and dishes. “We want it to be an experience. We want to showcase as much as we can,” he added.

While the menu doesn’t exist yet (and Solomonov assures us it will evolve up to opening day and beyond) the chef explained that the dishes will balance tradition with modern tastes. “We made the mistake before of being too traditional. People want something fresh. We think it’s fair to put our own twist on what we do,” he said. “We have a responsibility…to do the cuisine justice. We’re chefs, not grandparents.”

Still, Solomonov says the project feels a bit like going back to their familial and culinary roots — all three grew up in observant Jewish homes of varying degrees. Several of the menu items will draw upon their personal backgrounds and family recipes. “These are the sort of dishes that we grew up with as kids that made us interested in being chefs and restaurateurs. This is as good as it gets,” Solomonov told us.

Perhaps the most interesting type of dish Citron and Rose plans to serve (and the most exciting for kosher diners) is what the chef calls “Jewish charcuterie.” The term was virtually unheard of until recently, when it started showing up on menus at places like Kutsher’s Tribeca and a handful of forward-thinking kosher establishments. “We’re going to be experimenting with different kosher salamis and sausages, air-cured loins of beef, duck and goose. And probably some plays on chicken liver,” explained Solomonov.

While the team has never owned a kosher restaurant, and technically will “consult” on this project because owners of non-kosher establishments cannot own kosher ones, Solomonov isn’t concerned with religious laws interfering with their food. “There’s plenty of cuisines that don’t call for butter and meat. It’s not what the cuisine is.” Desserts will include elements like an almond water puree, frozen and whipped that “has creamiest texture,” Solomonov said. Thankfully, he assures us, “We won’t be using fake dairy substitutes.”

Innovative kosher restaurants are a rarity in America — there’s Pardes in Brooklyn, The Kitchen Table in Silicon Valley, Tierra Sur at the Herzog Wine Cellars in Oxnard, Calif., and a handful of others. Most often, these restaurants, unlike their non-kosher Jewish-inspired counterparts, look outside of Jewish cuisines for much of their culinary inspiration. Solomonov’s planned take on reinterpreting Jewish foods and digging for their roots in Europe is refreshing. What he’ll unearth and create, we’ll have to wait and see.