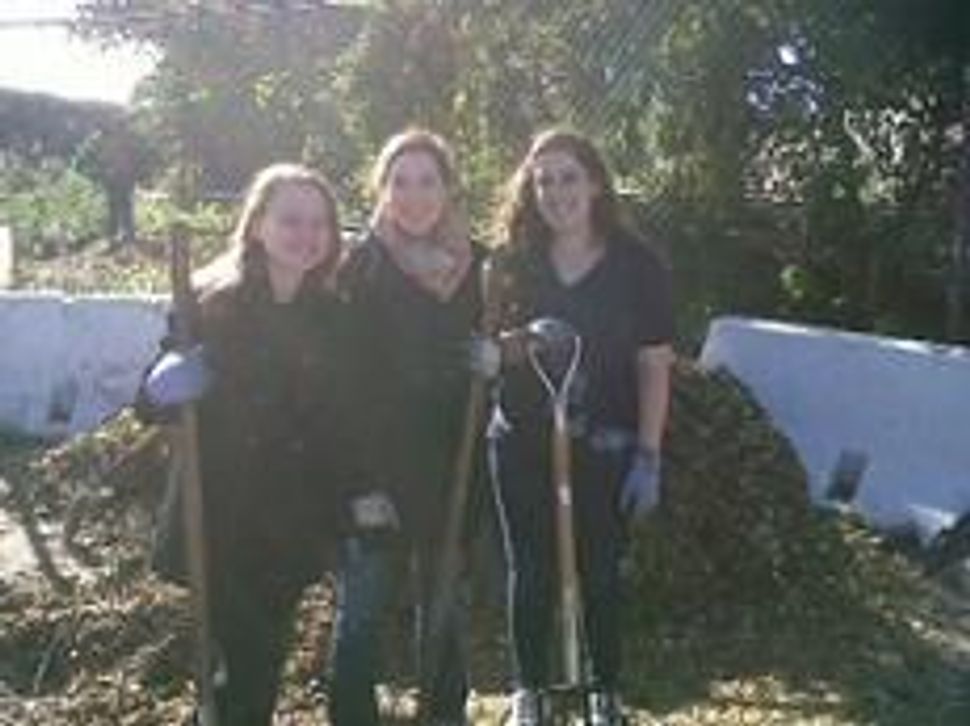 On an unseasonably warm, November morning, four female college students and their academic advisor boarded the subway to Hunt’s Point in the South Bronx. On this particular morning, we prepared for a day of experiential learning as part of our Fellowship in Jewish Social Entrepreneurship that is run by the Jewish Theological Seminary. In addition to interning in a field of social justice, fellows attend twice monthly sessions run by already-established entrepreneurs in the social justice field. As part of this fellowship, I interned on the Food Programs team at Hazon, but I wouldn’t begin to realize the effects of the work I was doing until the end of this influential field trip.

Throughout my time in college, my interest in the role of food in daily life grew, which was part of my attraction to Hazon. I liked how Hazon viewed the importance of healthy and sustainable food, through an explicitly Jewish lens. Though this field trip occurred only a few months into my internship at Hazon, I was beginning to see the complex web food spun in daily life. Each holiday has specific foods that we, as Jews, culturally favor. In addition, I had the opportunity to work with members of CSAs, and I saw that people are truly invested in where their food was sourced and who was involved in producing it. As a student living in Manhattan, food is not a privilege; I have choice and agency in what food I choose. On our field trip, the other fellows and I learned that food to residents of the South Bronx played a very different role.

In the South Bronx, we began the morning at The Point, a center committed to developing cultural and economic revitalization in an area that is deemed by many to be a “food desert,” or an area of such industrialization that affordable, fresh food is difficult for residents to obtain. As Sharon de la Cruz, educator, environmental advocator, and motivator at the Point, toured us around Hunt’s Point, she showed us some key areas like the youth detention facility that sits conveniently (and symbolically) in the center of the community, the only “green space” in the community, which is located at least a twenty minute walk away from the area where most residents live, and the lines of trucks headed to Hunt’s Point Cooperative Market, the world’s largest wholesale market. Ironically, the case of Hunt’s Point food desert is not so different from the saying, “Water, water everywhere, but not a drop to drink.” Food is so abundant in Hunt’s Point, yet it is practically inaccessible to those who live there.

Saying that this experience was influential would be a great understatement. It has been so much more than that. My work at Hazon has taught me the importance of not only eating sustainably-produced food, but the importance of living a sustainable life. The field trip gave me perspective on food sustainability in a community very different than my own. Where residents struggled just to get food, sustainable infrastructure could be used to regenerate and revitalize already existing structures. Sharon described the burden residents faced because of the high pollution and community expectation that most young people would visit the detention facility. She encouraged providing green and safe spaces for students looking for healthy environments in which to do homework or engage with peers their age. She advocated for more farmers’ markets to bring fresh, local produce to the area. By changing people’s expectations, demanding dignity for the residents of Hunt’s point, and encouraging people to change their attitudes about Hunt’s Point, Sharon provided a model for social change.

This field trip occurred at a pivotal point in my time at Hazon. Because I was just starting out, I was able to integrate the values Sharon communicated to us as makers of social change into my personal internship. She taught us to be aware of “problems” (meaning those that were engrained systematically), to be on the look out for “issues” (meaning symptoms of larger, systemic problems), and never to stop searching and solving the problems at hand. Sharon’s words were so meaningful, because as a young person in her community, she was making a difference through inspiration.

Six months later as my internship comes to an end, Sharon’s words still run through my head. Since then, I have learned about various other issues of social justice, including education, global poverty, and economic justice, but there is still a spark that ignites my interest in food justice and food sustainability. And I hope that Hazon is only the first stop on a pathway to more change.

Alyssa Berkowitz is a senior in the Joint Program between the Jewish Theological Seminary and Columbia University. When not studying, she enjoys cooking from local ingredients and perusing her local farmers’ market.