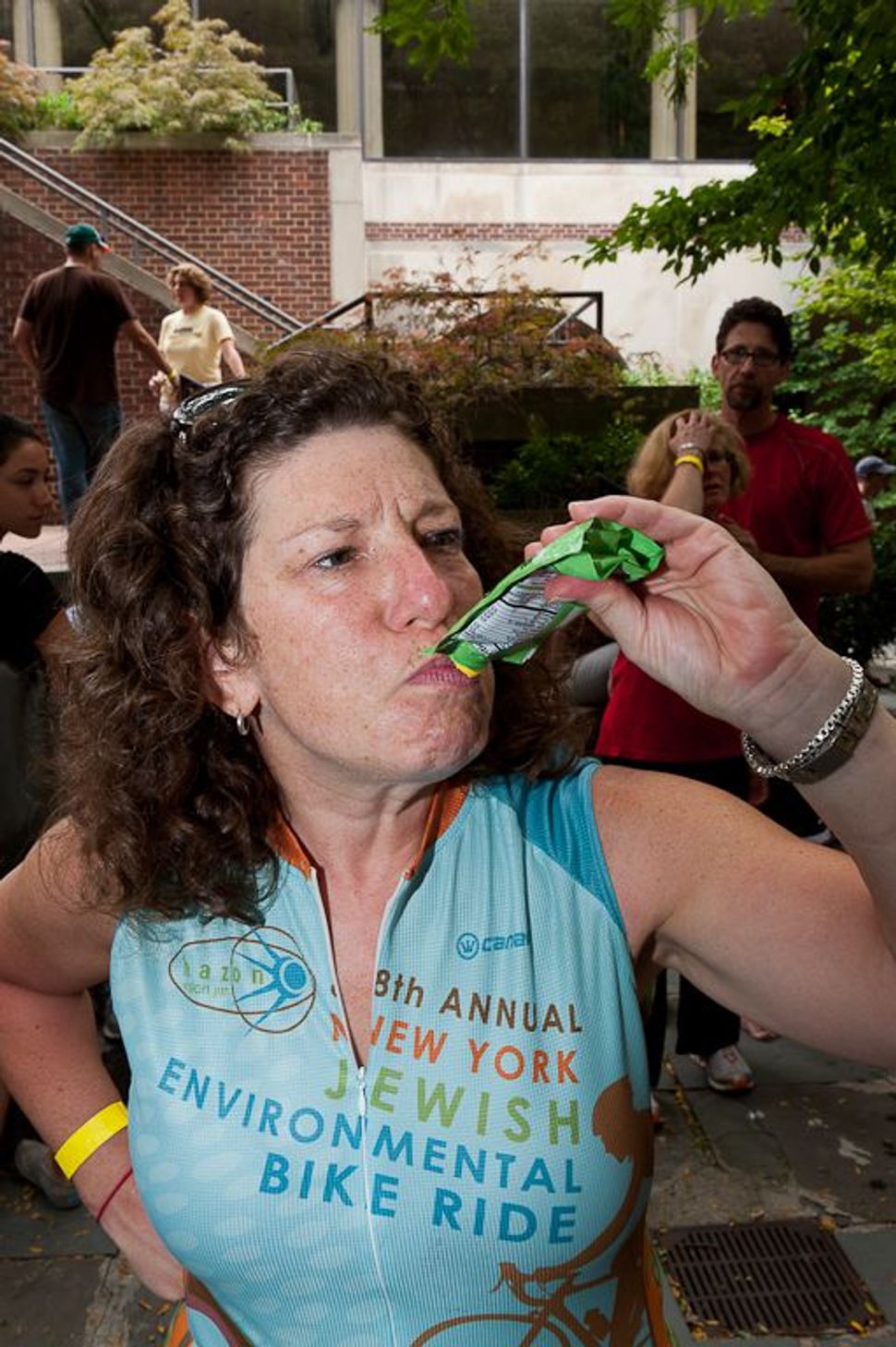 Andrea Newman refuels for the next leg of the 2011 Hazon New York Ride. Image by Michael Brockstein

Today kicks off Bike Month in cities all over the country, including New York. As the weather warms, it’s a great time to celebrate two-wheeled transportation, whether you’re getting some place you have to go (like work) or going someplace fun (like the beach) getting there can be part of the excursion. Of course, once you start talking about biking, you need to talk about eating. Hazon organizes Jewish bike rides all over the country, both large and small, and I took a poll among our riders to find out what favorite foods our riders just can’t live without.

Most honorable mentions went to the banana: a sweet, filling, nutritious snack that comes with its own biodegradable packaging. Many riders also bring nuts and dried fruit, which are easily transported and not generally affected by extreme temperatures or rough handling in a backpack or bike bag.

Jeff from Colorado wrote “for really long rides through the desert, don’t hesitate to stop and eat a real meal. High carb meals are easier to digest than fatty meals.” Val from Brooklyn added that a favorite long-ride treat is fresh corn picked up from a farm stand along the route, or to stop for an Italian ice on a hot day. She cautioned against heavy eating though: “My biggest mistakes have been stopping for lunch at the Kimchi Taco truck or a hallal curry lunch. Much too heavy to get any energy from the stomach to the legs afterward.”

On energy bars, the jury was mixed: Rick voted for Gu and Clifbars, Val for Lara Bars, but Jeff felt that riders shouldn’t “wasted your money on gels, power bars, etc.” and instead they should “eat food.” With a near explosion of energy bars these days, many of which are organic, low sugar, high fiber, and even kosher, an energy bar on a long ride can be a useful way to fill up, and somewhat of a special treat. But it’s not a must. Gil has an altnoi take on the topic, bringing halva on his rides “for fun and energy.” The old-fashioned peanut-butter and jam sandwhich is always a good choice, too: it’s portable, not too easily messed up, and has good carbs and sugar to keep you going. Jon from New Jersey has a twist that gives him extra energy: a layer of raisins.

A few riders mentioned biking and alcohol. Apparently, there’s quite a small but mighty crew of folks who ride their bikes to the Altshul traditional-egalitarian minyan in Brooklyn (they also have a composting committee, go figure). Biking and Kiddush make uneasy partners though: one rider has learned to “only allow [himself] one drink/l’chaim when biking to shul…two drinks is one too many when cycling.” Of course, post-ride is another matter, and we heartily recommend a local micro-brew to celebrate a good ride, or, if you want something non-alcoholic, both OJ and chocolate milk come heartily endorsed, as does this antioxidant smoothie from Erika in Brooklyn:

You can find more cycling and nutrition tips here, or share in the comments. What’s your favorite bike food?

Anna Hanau is the Associate Director of Programs at Hazon. In 2004 she rode 100 miles on her bike in one day and definitely ate more sandwiches that day than she could count on two hands.