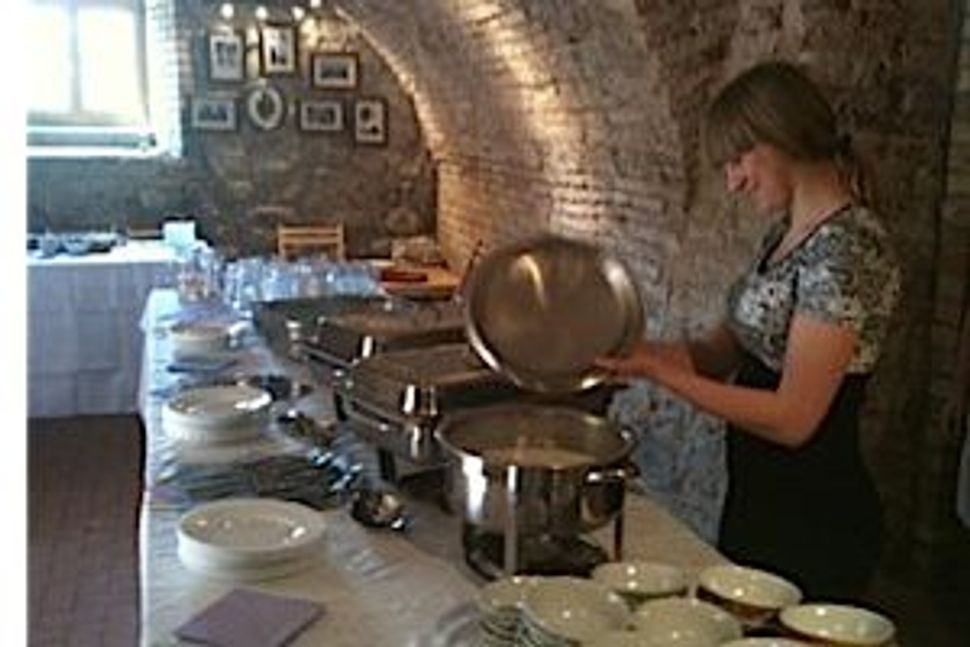 SEJNY, POLAND — The first time I visited Lithuania in 2006 I was overwhelmed by the extraordinary sensation that I was traveling through a giant Jewish deli that extended across the entire country. Blintzes! Latkes! Sour cream! Herring! Smoked fish! Black bread! And even — on the breakfast buffet of one hotel I stayed in — vodka, at 8 in the morning.

Recently I spent a week in the far northeast of Poland in the town of Sejny, so close to the border with Lithuania that my cell phone kept jumping back and forth between the two national networks.

I was there for a series of events hosted by Borderland Foundation, an organization that works toward inter-ethnic cultural and artistic interchange, along with promoting an understanding of Jewish culture, heritage and memory.

Throughout the week, a range of symposia, concerts and debates, hosted at an old Yeshiva and at a manor house where the Nobel-prizewinning Polish poet Czeslaw Milosz spent holidays in his youth, provided much food for thought. At the same time, a veritable feast for the palate was provided by two local chefs — Grażyna Łowiagin, who runs a country restaurant call Gospoda in the nearby village of Dusznica, and Wojtek Konikowski, who heads the kitchen at the Skarpa restaurant in Sejny — who served a range of wonderful local specialties each day at lunch and dinner. It was East European comfort food at its best: bliss for me, as I just can’t find this type of cuisine in Italy, where I spend much of my time.

Meals featured traditional regional dishes found in this border area of Poland and Lithuania. We had potato pancakes served with sour cream sauce; kartacze — huge, chewy potato dumplings stuffed with meat or white cheese; kiszka (kishkes; intestines) stuffed with potato; and soczewiaki and kakory — deep fried or baked potato cakes stuffed with lentils and kasha: they are so characteristic of the region that they have been registered on a list of traditional products. Soups included chlodnik (cold borsht with cream and dill); and cucumber soup. For dessert, there was a dry, semi-sweet cake called sekacz, shaped like a miniature tree.

One standout dish was a vegetarian version of golabki, or stuffed cabbage — a dish found in many varieties all over eastern and central Europe. In Yiddish it’s called holishkes and is often served at Sukkot, topped with a sweet and sour sauce made with tomatoes, apples and raisins.

Stuffed cabbage it is typically made with a meat filling, and I have to say that I never really liked my mother’s own recipe that called for a filling of minced meat and rice, but chef Konikowski at the Skarpa restaurant prepared a delectable version stuffed with kasha and mushrooms, accompanied by a sauce made from double cream and mushrooms.

I persuaded chef Jonikowksi to part with his recipe for kasha and mushroom stuffed cabbage. His quantities and measures are a little ad hoc, and he warned me that much of the recipe had to be carried out “to taste,” including how long to bake it at the end.

Boil the kasha, drain then let it cool (wholegrain kasha should take about 20 minutes)

Saute the chopped mushrooms in butter until tender (some cooks also like to sautéed chopped onions). Remove from heat and let cool down.

Add the egg, breadcrumbs and sautéed mushrooms (and onions if used) to the kasha, season to taste with salt and pepper and mix well.

Remove the hard stalk and boil one whole head of cabbage until the leaves can be removed whole – white cabbage will do (and is what Konikowski used for the golabki he served us, but he says he actually prefers Savoy cabbage, which gives a more delicate flavor and texture.) This can take up to 40 minutes. Some cooks remove the outer layers as they become tender, leaving the inner ones to cook.

Remove any hard core from the leaves

Place stuffing on the leaves and roll them into envelopes, folding over the edges to put the “seam” underneath.

Place the rolls, seam down, tightly packed into a pan greased with butter, add water to just cover the rolls, cover and then bake for about 20 minutes in a 400 degree oven. You can then uncover and bake for another 10 minutes or so to let the rolls brown.

Saute mushrooms in butter; stir in sour cream or double cream until it reaches the “runniness” and consistency you prefer. Season with salt, pepper to taste and pour over the hot cabbage dumplings.