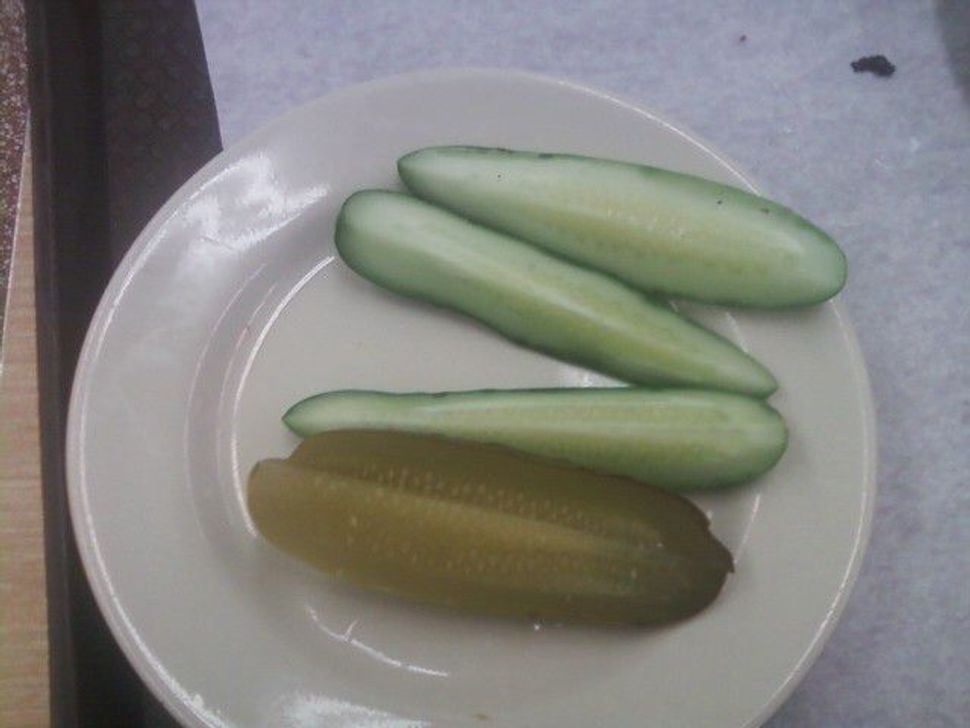 I grew up eating pickles. Every few months, my uncle would send me a half gallon of “Uncle Phil’s Dills” — a delicious, salty, garlicky, creation of his own full-dill pickles, and I would eat the entire jar on my own. As I’ve grown up, my love of pickles has never ceased; I love new-dill pickles, fried pickles, even dill pickle chips (McClure’s makes a great chip). In college, I spent a semester in Spain and spent a majority of my free time eating olives and people watching. Now that I’m living in New York City for the summer, I’m on a quest to find the best pickle in the world.

Jews have a history with pickling. My grandfather, who grew up here in the 1930’s, tells me stories about the pickle-sellers on the Lower East Side of Manhattan and the Jewish areas of Brooklyn. Hearing him talk about the barrels full of brine water, garlic, salt, dill, and other spices, I imagine it was a pickle-lovers dream. There were the traditional pickled cucumbers, of course, but there were also pickled green beans, tomatoes, and cabbage — there were even pickled apples and watermelons! Pickling was an affordable and convenient way of preserving vegetables without refrigeration for many Jewish and Eastern European immigrants. Many Jewish school children would often spend their pocket money on pickles and candy. Despite their pervasiveness in society, however, not everyone loved the pickle, and one author even went so far as to call it “a seething mass of rottenness.”

So pickles are in my system — they are my history, both personally and ethnically, and I am on a mission to find the best one in the city. At home, in Ann Arbor, I like Zingerman’s or Amer’s, but New York is where it began, and I want to taste the original.

Being a stranger in this strange land of garlic and brine, I asked around for some advice on which pickles to taste. Overwhelmingly, the responses I got said to try Katz’s and the Pickle Guys. In addition, I had a recommendation to try Rick’s Pick’s. Unfortunately, due to time constraints, I was only able to try these three. In order to keep it fair, I tried similar pickles at each place/from each producer. In this case, I tried what is commonly known as a “full-sour” pickle, which means that the cucumber is cured in a higher ratio of salt and vinegar to sugar (or even no sugar), and allowed to ferment for longer. Like when tasting anything, there can be certain categories or words to describe certain flavors, but really, when it comes down to it, the most important part is whether or not you like them. I based my rankings on two categories: crunch (I like a good crunch!) and overall flavor.

Up first, Rick’s Picks. These came recommended by a co-worker and we tried them at a recent staff event. The pickles are “artisanal” and come from local farmers. It looks like they have a number of other products that would be fun to try (Smokra? Windy City Wasabeans?). The pickles were the crunchiest of the ones I tried, even though they were spears. The flavor was good overall. I was surprised when I first bit in, since they weren’t all that sour, and the aftertaste almost reminded me of a sweet pickle. They were nice and garlicky (there was a ton of garlic floating in the jar) and I found myself liking them more and more as I ate them.

Next up, Katz’s Deli — a New York staple since 1888. This place is an institution, and I’m glad to have the chance to visit. The pickles here were not terribly crunchy, but had a great dill flavor. They were fairly sour with lots of garlic- more than the Rick’s. The guy behind the counter was really nice and even threw in a new dill for me to try when I told him why I wanted a pickle (it was great!). Unfortunately, they weren’t made in-house, and no one could tell me where they were from.

Finally, the Pickle Guys, the last of the Lower East Side pickle shops. This place smells so good! They have barrels upon barrels of pickled items (okra, carrots, peppers, olives, and, yes, cucumbers). The pickles here weren’t terribly crunchy, but they were juicy and SO garlicky. The flavor of these was by far my favorite, and I would go back every day just to smell the place if I could.

So who was the winner? I would have to give it to the Pickle Guys for overall flavor, but Katz’s for the experience. Rick’s has so many more things that I would like to try, so, really, I don’t know where I stand. I just loved trying all those pickles!

Rachel Yerkey is a Masters in Social Work 2012 candidate in the University of Michigan’s Jewish Communal Leadership Program and is Hazon’s Social Work Intern. She is excited to learn more about creating sustainable Jewish communities, food justice work, and the ins-and-outs of the non-profit world.