Veal, Lamb, Duck — It’s All Bacon to Them 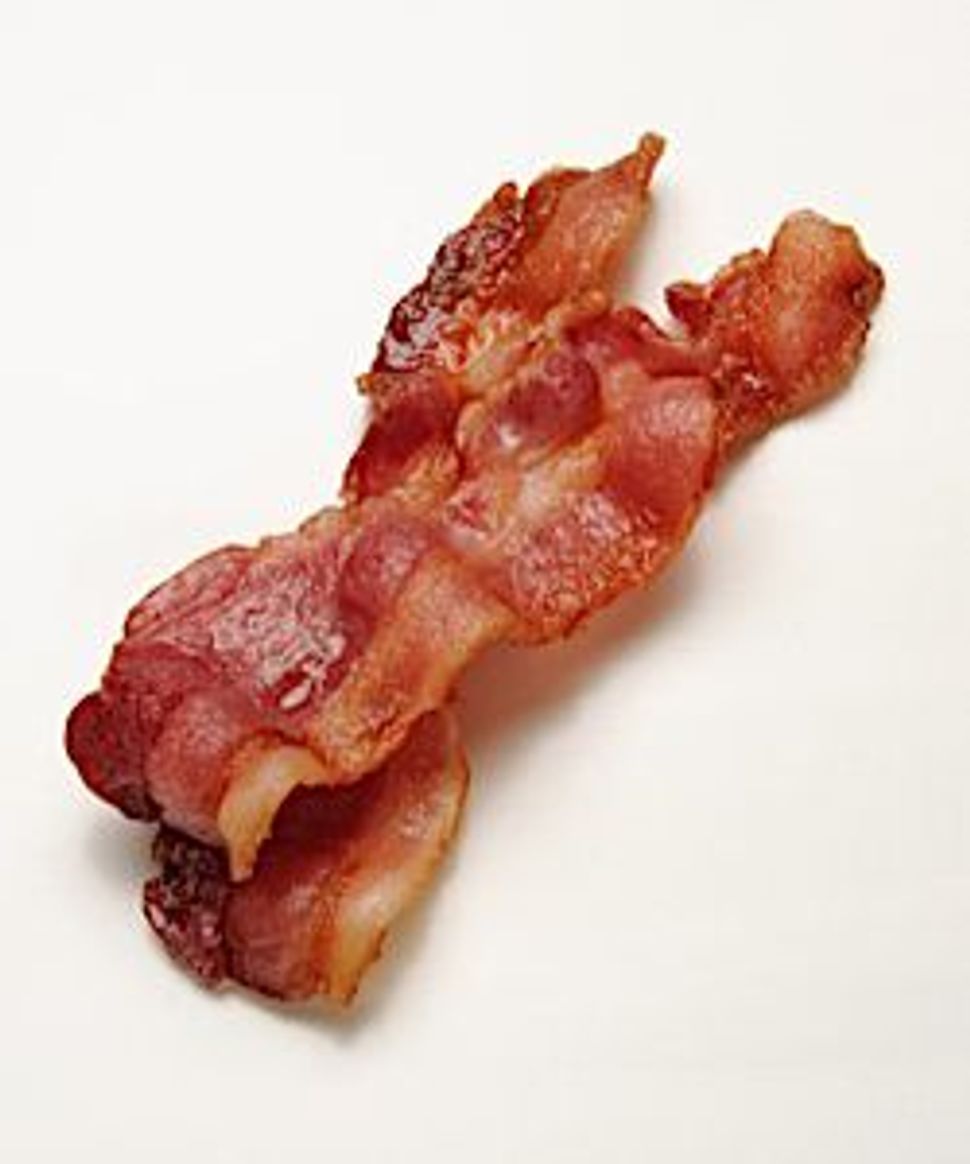 Epic Bites is working to cooking up a kosher version of this. Image by iStock

Yitzchak Bernstein and Eitan Esan have a real thing for bacon. One might think this would be a problem for a couple of Orthodox kosher caterers, but it isn’t. In fact, it is their obsession with this taboo food that is bringing them and their new Oakland, California-based business, Epic Bites, a lot of attention. The word is out among Northern California’s observant Jews that if you want to buy your bacon and be able to eat it too, you call these guys.

“Let’s face it — Jews want what they can’t have,” Bernstein told The Jew and the Carrot in a recent interview over Skype. “I love bacon. It’s the ultimate taboo. People think our bacon is too good to be kosher,” he said. Bernstein, 28, actually got a chance to eat the real thing — pork bacon — when for a period in his life, he moved away from religious observance. But, now he is back to living as an Orthodox Jew, and he’s not about to give the stuff up. Esan, 27, has never eaten pork in his life and is finding this whole kosher bacon thing “phenomenal.” He has been astounded that “even non-kosher people are asking for it.”

“Bacon isn’t really about the pork,” Bernstein, a culinary school graduate and expert bread baker, explained. “It’s about the fat-meat ratio and the salty-smoky-sweet-savory-slightly acid taste. It’s about the crispy exterior and the soft interior.” He also pointed out that it is about the taste of the meat — veal actually has a similar sweetness to that of pork. With these concepts guiding them, Bernstein and Esan, have been perfecting a variety of kosher bacon and pork-like dishes since opening their business just six months ago.

Currently, Epic Bites offers veal bacon, beef bacon, and lamb bacon. In addition, they make pancetta from lamb, and are working on making it from veal. Also on the menu is veal lardo, which is essentially cured fat, as well as air-dried duck (duck bresaola) that is salted and left hanging for two weeks. Finally, they make a duck ham. “We cut it paper thin and it melts in your mouth,” Bernstein noted.

While they hot smoke the duck ham, everything else is cold smoked. But to a large extent, it is the seasonings in the curing process that are key to creating the flavor people are hankering for. The team makes their own spice blends like thyme, garlic, brown sugar, chili, black pepper, coriander for their beef bacon and Szechuan peppercorns, coriander, blood orange peel for their duck bresaola.

Epic Bites uses pasture-raised meat (60 pounds of it every week to two weeks), with pastured kosher meat company Grow and Behold as its main supplier. They use organic produce and ingredients, whenever possible, in all their cooking and baking. However, they do add small amounts of nitrites and nitrates to their cured and smoked meats to preserved color and flavor.

The partners have found that their bacon jam (made from veal bacon) has become an especially versatile item. They soak the bacon in vinegar, and then mix in maple syrup, sugar and herbs. The sweet-savory taste of the jam has made it great for spreading on waffles topped with poached chicken breast, and on banana bread slathered with peanut butter mousse for their open-faced “Elvis” sandwiches.

Esan loves using the bacon jam in their kosher BLT sandwich. “You don’t have to worry about the bacon slices falling out all over the place as you bite into it,” he said with a chuckle.

So, far you can only satisfy your jonesing for Epic Bites’ kosher bacon and “pork” if you hire Bernstein and Esan to cater a dinner or affair (they do everything from small house parties to 400-person weddings). Or you might be so lucky as to be invited to one of their events. Unfortunately, you can’t pick up a jar of their bacon jam at the market or order it online…yet.

Epic Bites does not have a website. Bernstein and Esan can be contacted at [email protected]

Veal, Lamb, Duck — It’s All Bacon to Them