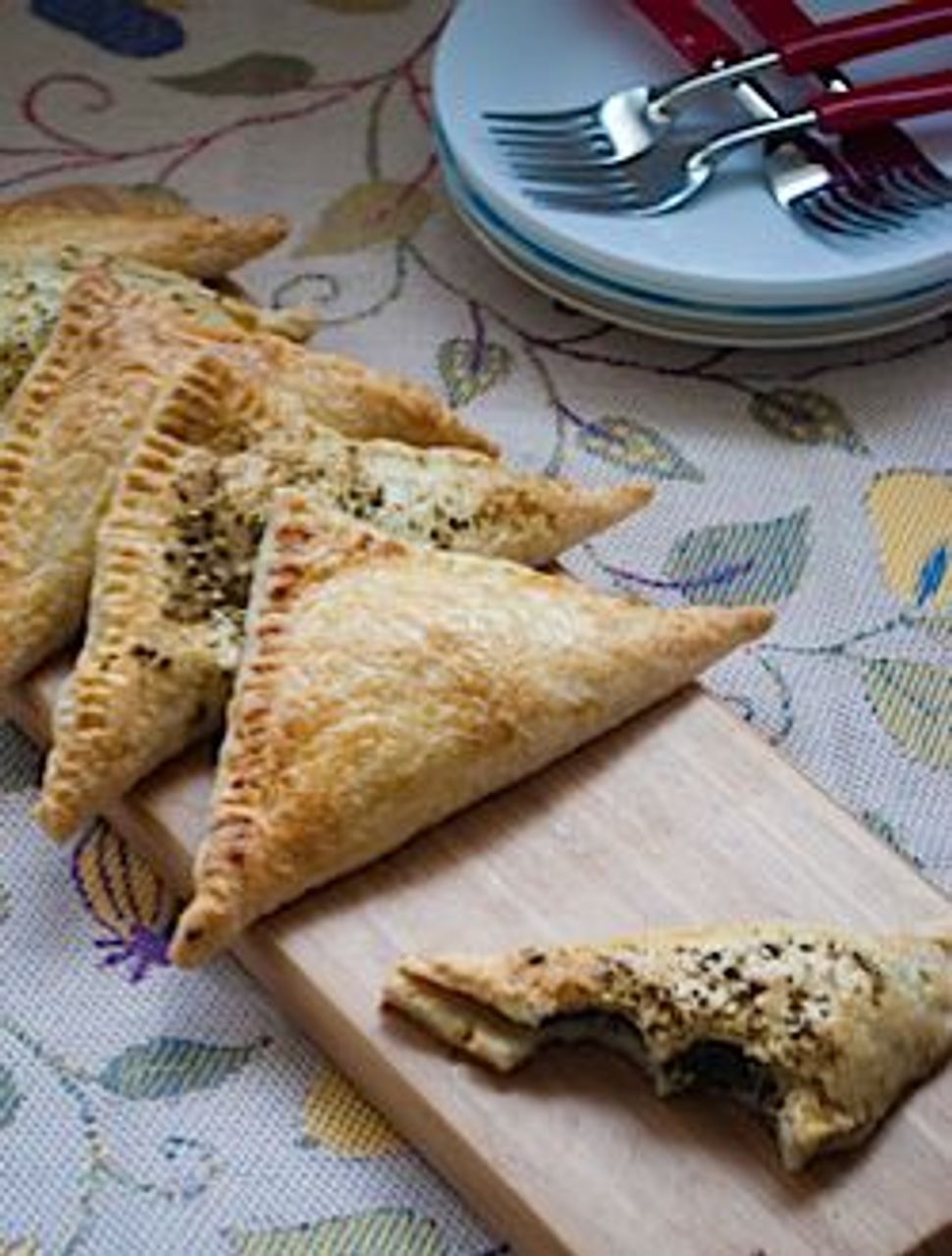 While blintzes and cheesecake are the stars of Ashkenazi celebrations of Shavuot, bourekas (flaky, stuffed pastries) figure prominently in Sephardic traditions. They can feature any number of fillings, and in Israel they are commonly found stuffed with mushrooms, potatoes, spinach, or tuna fish. Cheese is another favorite filling, and one that is perfect for the dairy-infused holiday of Shavuot.

Burekas originally hail from Turkey, but have been fully adopted into the Israeli culinary cannon — showing up on breakfast menus, for lunch and, perhaps most commonly, for a midday snack.

Traditional Turkish versions are more often snake-like cigars (in fact, the word probably comes from the Turkish bur, which means “to twist”), while in Israel they often take the form of turnovers, both big and small.

Cookbook author Gil Marks writes in “The Encyclopedia of Jewish Food” that “In Modern Israel, borekas…follows only falafel in popularity as a street snack food and rank among the favorite home treats for the Sabbath or a simple weekday nosh.” In Israel they are typically served with pickles, tahini, a fiery hot pepper paste, and hard-boiled egg, which can also be stuffed into open toasted borekas for a more substantial meal on the go.

Bakeries in Israel and Turkey, often dedicated solely to the humble boureka, tend to stick to the traditional flavor combinations — but that doesn’t mean you have to. Although feta or other mild white cheeses are the norm, consider this just a starting point for what are hundreds of possible homemade iterations. Celebrate Shavuot in all its cheesy glory with a quattro formaggi or four cheese scenario, mixing and matching your favorite cheeses. Add in chopped chives or sun-dried tomatoes, roasted garlic, pesto, or even truffle oil for elegant and fun new takes on these tasty, hand-held pastries.

Although traditionally time consuming to make at home, modern wonders like frozen puff pastry make preparing them a snap. This Shavuot, make up a big batch and stuff them with your favorite cheesy fillings. Spinach and feta is my favorite combination, one that pairs naturally and is reminiscent of the Mediterranean region from which they come. The puff pastry bakes up to create a flaky, lightly chewy envelop for the salty, cheesy filling.

If you’ve never worked with puff pastry before, never fear. Allow it to defrost overnight in the fridge, and make sure that it’s cold, which makes it easier to work with. When rolling out the puff pastry, work on a nonstick surface (I like parchment paper or baking mats like Silpat) or a floured surface so the dough doesn’t stick. The other great thing about bourekas is that they can easily be made in a big batch and then frozen to reheat later, so you’re not cooking up a storm in a big holiday rush.

1) Heat the olive oil in a large skillet over medium heat. Add the onion and garlic and cook until just softened (be careful not to burn the garlic). Add the spinach and cook, stirring often, until fully wilted, about 3 minutes.

2) Remove from the heat. Season lightly with salt and pepper and vigorously stir in the lemon juice and egg yolk (reserve the egg white for later). Transfer the mixture to a bowl and allow to cool.

3) Once the spinach is cool enough to handle, squeeze out as much liquid as possible and roughly chop. (I realize that it seems counter-intuitive to put liquid in then squeeze it out, but after countless test runs this process led to the best results.) Return spinach to the bowl and thoroughly mix in the feta.

4) Preheat the oven to 400°F. Line a baking sheet with parchment paper.

5) Roll out the puff pastry to a rectangle about 1/8-inch thick and 12- by 18-inches. Cut into 6 even 5- to 6-inch squares. Put a spoonful of the spinach-feta mixture into the center of each puff pastry square. Fold the puff pastry over to form a triangle. Press down with a fork along the edges to tightly seal.

6) Transfer the turnovers to the prepared baking sheet. Brush with the reserved egg white and sprinkle with za’atar, if using. Put in the oven and bake for 20 minutes, or until golden brown.

7) Remove from the oven and allow to cool slightly before serving. Spinach-feta turnovers are excellent warm or at room temperature, and can also be made ahead and frozen.

8) To freeze, lay flat on a baking tray and put in the freezer. Once frozen, transfer to freezer bags. To re-heat, simply bake in a pre-heated oven for 10 to 15 minutes, until warmed through.

Reprinted with permission from “Puff Pastry at Brunch: 10 Sweet and Savory Recipes to Start Your Morning” by Katherine Martinelli (Hang Time Press, 2012).