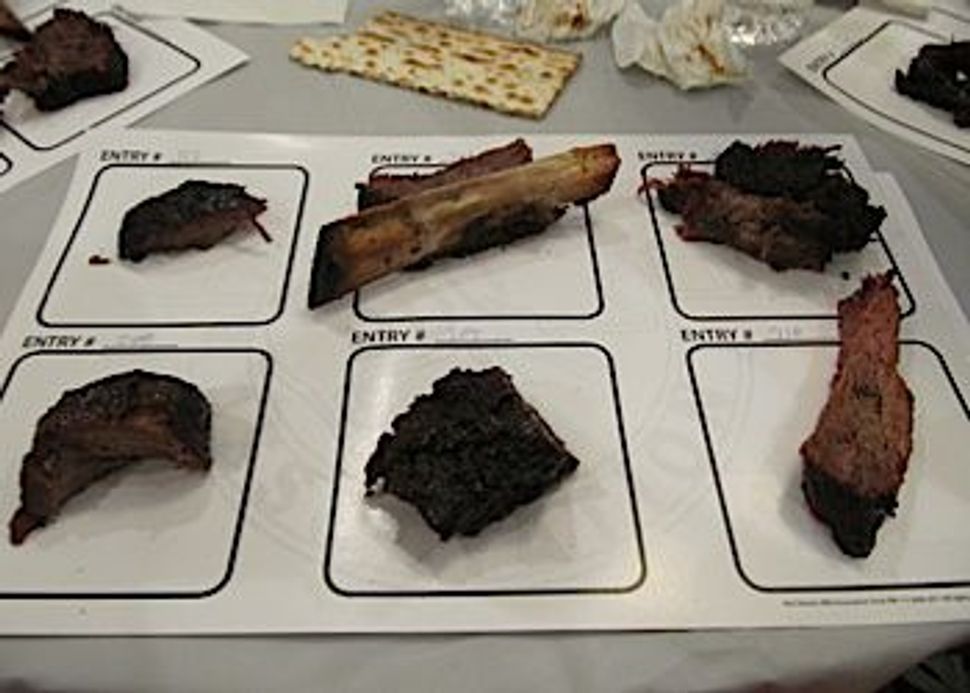 This past Sunday, I found myself standing in a synagogue parking lot, resplendent in bright yellow tights, red shorts, a red shirt and a yellow satin cape and a rack of ribs emblazoned across my chest. But, I didn’t stand out as much as you might imagine. I was at the first annual Long Island Kosher BBQ Championship, where I was a judge and I was ready to eat!

The first kosher BBQ competition in the country was started 25 years ago by Melvin Katz and Ira Weinstein, members of Congregation Anshei Sfard Bet-El Emet (ASBEE) in Memphis, Tenn. The two had a friendly rivalry going for years, to see whose smoked brisket was the best. After approaching the officials of the world-famous Memphis in May World Championship Barbecue Cooking Contest about creating a Kosher event, and being turned down, the two started their own meaty competition. The annual event now includes more than 40 teams that travel from as far as New York to compete.

Over the years, other BBQ competitions have been founded, each using the ASBEE model; The Annual Atlanta, Georgia Kosher BBQ, the When Pigs Fly Kosher BBQ Competition in Birmingham, Ala. and the newest event, The Long Island Kosher BBQ Championship in Westbury, NY. In late August, The Kansas City Vaad Kosher BBQ will be the fifth annual event. Others, like the Hava Nagrilla BBQ Competition, which ran in Philadelphia for two years, popped up but are no longer running.

While the competition is fierce and the food delicious, these competitions are pretty different than what you’ll catch on TV. Instead of driving their prized meat smokers hundreds of miles to the cook-offs, all the smokers and utensils are provided by the competition’s organizes to ensure everything is kosher. And instead of bringing in prized meat and top secret spice rubs, the competition’s “grocery committees” supplies all the ingredients. (Competitors can bring their own ingredients to some events, but only if they meet the kashrut standards of the event). With the diligent work of the kosher supervisors, contestants need not be observant or even Jewish.

Naturally, the meat of choice at these events is beef. Pitmasters are judged on their briskets, beef-ribs and entries in a third category — usually beans, but sometimes chicken. Prizes are also given for Best Decorated Booth and Best Team Name.

While encouraging some friendly competition between Kosher pitmasters is a noble goal, these events also serve a higher purpose. Each supports a synagogue or charitable organization. At the Long Island event, this weekend, part of the proceeds went to local hunger relief organizations.

Now to explain why I was dressed in a cape and tights. In 2008 I decided that I would compete in the ASBEE event. They had never had a competitor come down from New York City just to cook BBQ, and I had no idea what I was getting myself into. I didn’t place in any of the events that I entered and I didn’t have a booth, or even a team name — all essential parts of the competition.

I came back the next year better prepared and even more determined to show that a Yankee could serve up some finger-lickin’ BBQ. I still couldn’t bring a booth on my flight down, but I would become “Fleish Gordon,” a costumed superhero pitmaster. Finally, in 2010 I was able to bring my family to the ASBEE event. After 18 hours of driving, we emerged at ASBEE as “Fleish Gordon and his Beefy Bunch.” My wife and kids adopted monikers such as Princess Paprika and Brisket Boy. We cooked as a team. While we didn’t win in any meat-related categories, but I was proud to take home the Adult Pickle Eating award.

Unsurprisingly, wearing a red and yellow superhero costume has afforded me some measure of kosher BBQ fame. The Long Island event was my second time being invited to judge one of these events. After basic instructions on judging from members of the Mid-Atlantic Barbeque Society, my fellow judges and I sampled and judged entries for three categories from 18 teams. My judging duties dispatched, I went on — powered by my alter ego “Fleish Gordon” — to claim my second trophy for speed-eating kosher dill pickles.