A Turkish Shabbat Meal — Outside of Turkey 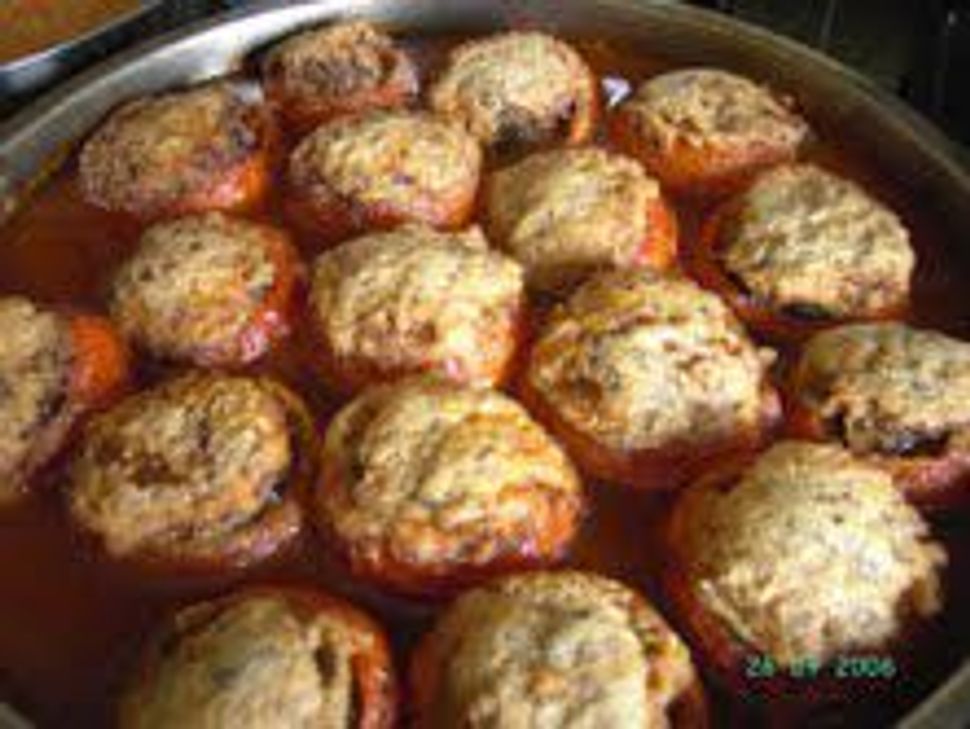 Despite a Jewish population of nearly 20,000, there is one lone kosher restaurant, Lokanta Levi, in Istanbul. Although it is adjacent to the Spice Market, its location is discreet and difficult to stumble upon, and it has an almost clandestine feel. The Muslim chef who was trained by his Jewish predecessor serves Sephardic-Turkish specialties like spinach “flan,” stuffed artichoke bottoms, and tender stewed meats in the intimate restaurant that overlooks the Bosporus.

As one might infer from the lack of kosher eateries, many of the Jews who remain in Turkey today do not keep kosher or observe Shabbat. But they keep their heritage alive through a tight-knit community and community organizations that works to preserve their traditions, the ladino language, and the food.

Still, one almost has better luck finding Turkish Shabbat foods — like bourekas and boyos (small spinach pies) — outside of Turkey. There are more Turkish Jews in Israel today (77,000 according to the Israel Central Bureau of Statistics) than in Turkey.

But their Turkish roots remain on the Shabbat table all the same. In Israel, flaky Turkish bourekas (savory stuffed turnovers) have become commonplace Shabbat fare. They can be made on Friday morning and eaten throughout the weekend with lunch or as a snack any time of day (get a recipe here. Turkish-style mezze (small salads and dips) are another favorite on Shabbat since they can be prepared ahead and eaten cold. Many recipes live in people’s memories, passed on from their parents and grandparents who emigrated from Turkey. JCarrot contributor Ariella Amshalem recalls the Shabbat foods that her Turkish grandmother, Aurora used to make almost every week.

Like many Turkish Jews, Amshalem’s grandmother moved to New York from Izmir when she was young and married Ariella’s grandfather when he came over from Turkey, but continued to cook traditional Turkish cuisine. Ariella’s comfort food growing up included recipes for Turkish dishes like tomat teynaldo (stuffed tomatoes; recipe below) and fideos (a paella-type dish made with thin noodles).

“[These dishes] are simple and not exactly what we would call healthy around the food blogosphere these days,” says Amshalem, “but they are real Sephardi-Turkish home cooking.” Seeing the recipe for tomat reynado, a play on the classic Spanish and South American tomat rellenos, one wonders why such a simple but delicious dish is not more popular the world over. Here tomatoes are halved and stuffed with a simple mixture of ground beef and onions before being fried for a dish that is a fun take on stuffed vegetables, called dolma in Turkey and Greece.

“I love this food,” says Armshalem, “and when I realize how few ingredients each of her signature recipes contained it makes me appreciate that it was all in the technique…she was truly a magician.”

1) Cut the tomatoes in half, crosswise. Remove the seeds and some pulp, reserving the pulp.

2) Combine the beef, onions, egg, salt and pepper in a bowl.

3) Fill the tomato halves with about 1/2 cup of the meat mixture, pressing to make sure the meat is firmly in.

4) Pour oil in a frying pan so that it comes up about 1/4 inch and heat over medium-high heat.

5) Dip the tomatoes (filling side down) in flour and fry lightly, only on the filling side. Cook for 10 to 15 minutes, or until the meat is cooked through.

6) Transfer the tomato halves to a shallow frying pan, about 10 inches in diameter.

7) Add water and tomato pulp. Cover and simmer for 15 minutes.

8) If you prefer, the stuffed tomatoes can also be baked instead of fried (the preferred method of Amshalem’s mother): Arrange the stuffed tomato halves in a baking pan (they should fit snugly). Add water and pulp. Cover tightly with foil and bake for 20 minutes at 375°F. Uncover and bake 15 minutes more until liquid has evaporated.

A Turkish Shabbat Meal — Outside of Turkey