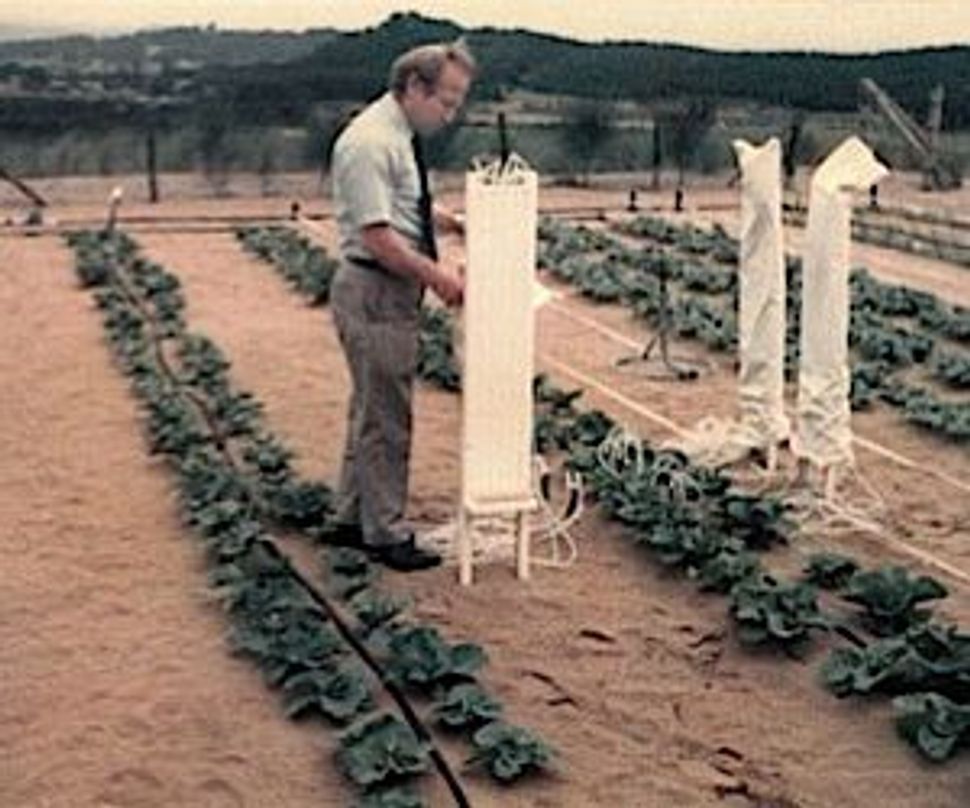 “If there is such a thing as rock star status in the world of soil physics, then Daniel Hillel has attained it,” Eric Herschthal wrote in a 2010 article titled “The Man Who Made The Deserts Bloom” in The Jewish Week.

Now, two years later, Hillel, an 81-year-old American-born Israeli scientist has won this year’s World Food Prize for his water-saving agricultural methods used first in Israel, and then around the world. These methods, known as micro-irrigation and drip-irrigation have increased crop production on arid lands in 30 countries.

It was a fortuitous encounter with Israel’s first prime minister, David Ben-Gurion, that set Hillel on his remarkable path. According to Herschthal’s article, Ben-Gurion met Hillel when he and his wife Paula came to visit Sde Boker, a kibbutz in the Negevwith the mission of settling the desert that Hillel had helped establish in 1952.

Ben-Gurion, by then in his 60’s, became a member of the kibbutz and pitched in with the work. Hillel, then in his 20’s was assigned to supervise Ben-Gurion. “It’s funny but true — I was Ben-Gurion’s boss,” the scientist said. The prime minister, impressed with Hillel’s revolutionary irrigation methods, sent him on his first trip — to Burma in 1956 — to teach this technology to developing countries. Many such trips to countries all over the globe ensued.

Kenneth M. Quinn, President of the World Food Prize Foundation, said he was most impressed by the ability Hillel has to bring different peoples and countries together and to promote peace through his work. He has participated in missions to teach and promote water-use efficiency across the Middle East, Africa, Asia and South America under the auspices of organizations such as the World Bank, UN Food and Agriculture Organization and U.S. Agency for International Development.

“His nomination for the World Food Prize included seconding letters from Arab scientists and experts living and working in Egypt, Jordan and the United Arab Emirates. He is a remarkable example of what one person can achieve by taking a leap and crossing cultural borders for the sake of the greater good,” wrote Quinn.

Hillel, is the first Israeli to win the World Food Prize, which has been given to citizens of a dozen nations. Fittingly, Secretary of State Hillary Clinton announced that Hillel had won the prize at a press conference at the State Department, on the same day that she met with Israeli President Shimon Peres in Washington at the Saban Center for Middle East Policy at the Brookings Institution.

The World Food Prize was founded in 1986 by agricultural scientist and Nobel Peace Prize laureate Norman Borlaug, with the goal of encouraging advances in all aspects of global food supply, including agriculture and food technology, manufacturing, economics and political leadership and comes with a $250,000 award.

Upon learning that he had won the prize, Hillel, an early spokesman warning of the dangers of global warming, expressed his happiness, but also his concern for the earth’s future. “My joy and gratitude at being granted the World Food Prize this year is tempered by the realization that the work this award recognizes is far from complete,” he said in an official statement. “The task of improving the sustainable management of the Earth’s finite…resources…is a task, indeed a collective responsibility, that we cannot shirk and must indeed broaden and intensify.”