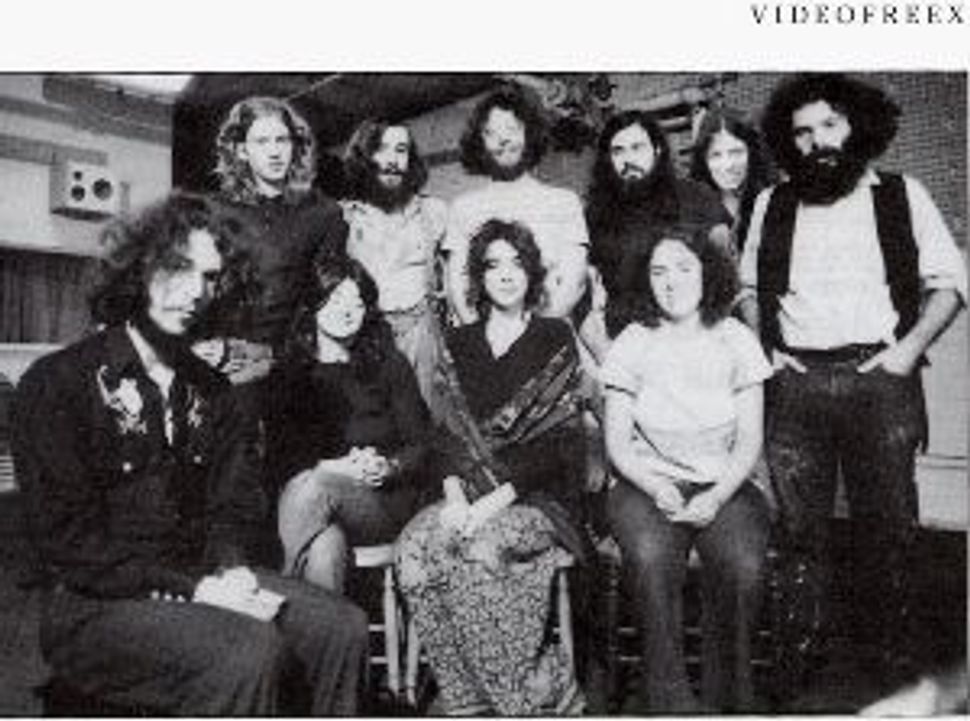 Members of the Videofreex collective pose in a Manhattan loft circa 1970. The author?s father, Chuck Kennedy, stands in the top row, second from left. Photoshopped from an original by Bill Cox, courtesy of Videofreex.com. Image by Bill Cox

More than anything else, I can thank a salmon dish for bringing me into this world. It was that take on a fish ubiquitous to Jewish tables that nudged my Yeshiva-educated mother to fall for my lapsed Catholic dad.

“This is impressive!” My mother exclaimed upon her introduction to the salmon and other tasty wonders on her first date with a new guy. “Who catered this party?” She asked.

Her date, the long-haired, bearded technician for the Videofreex video collective shrugged. “Oh, I cooked it,” he said.

My mother is still blown away when she tells this story. My father’s dedication to good food has stayed alive all those years and traveled with me thousands of miles.

The Videofreex had a lot to do with my father’s epicurean passion. In the early 1970s, the 10 “Freex” moved into a rambling former rooming house in Lanesville, N.Y. There, they documented the anti-war and civil rights movements and ran a pirate television station known as Lanesville TV. An upcoming film will document this adventure and two Freex have written books on the topic, but I have been on a fact-finding venture of my own. I wanted to know how they ate.

I learned that the Videofreex garden I had heard about growing up sprawled over a quarter acre of the house grounds, known as Maple Tree Farm. In between shooting the legendary 1971 May Day protest and interviewing the likes of Fred Hampton and Abbie Hoffman, my father helped to grow peas, corn, squash, cabbage, watermelon and herbs — both culinary and otherwise. The Freex took turns cooking for each other and guests.

These video artists did not take to large scale cooking smoothly. During one infamous dinner, their client Lily Tomlin had to chow down on jaw-shatteringly tough corned beef. Pop’s cooking usually involved copious amounts of fat and bordered on too far out, the Freex told me. He once made a batch of split pea pancakes that, as one member recalled in a recent email, “were a ‘once in a lifetime’ meal and not repeated.”

The Videofreex served peerless java, though, when they received enormous bags of green coffee beans from a drug rehab center in exchange for some video work. Each morning, my father filled the house with the smell of roasting beans before he ground them in the blender and brewed aromatic cups of creative fuel. During the spring of 1978, the last one they spent on Maple Tree Farm, a few Freex tapped the trees and boiled the sap into a deep caramel syrup.

My father’s love of food continued as I was growing up, infusing my weekend visits to his New York City stomping grounds. He introduced me to the sweet rabbit stew of Astoria’s Greek restaurants and the salty crunch of Coney Island boardwalk fries. I ate seaweed salad and oxtail soup at an age when many kids cling to plain pasta.

In his small kitchens in Brooklyn and Queens, Pop would make breakfasts of rich, greasy Scrapple slathered with maple syrup. For dinner, he would tackle a piece of fish roe as big as my hand or cook up his signature spaghetti with meat sauce.

My dad still took chances with meat. I’ll never forget the time he left a steak marinating in garlic and soy sauce in the back of the refrigerator. “Either this will kill me, or it will be the best damn steak I’ve ever eaten,” I remember him saying when he discovered it. He tried it and, well, he survived. We always had vegetables, even if they sat to the side.

When I started eating kosher style and then vegetarian at 14, I cooked more for myself. My repertoire took in the potato latkes and kasha varnishkes inspired by my Jewish upbringing. I would later go on to write about Jewish and sustainable food professionally.

My father died in March of 2004. Though not an intentional memorial, that very spring my roommates tilled the back yard of our Washington, D.C. group house and planted a garden. We grew tomatoes, peppers, squash, and other tasty crops, just like at Maple Tree Farm — though we limited ourselves to the standard herb garden of basil, dill, and rosemary. A few months after that, I started a part-time private chef service. I even catered a party, though no one asked me who had made the food. It was pretty evident as I ran around the small nonprofit office rolling crepes with sweet potato-ginger filling and stacking last-minute plates of sushi rolls.

I do not cook with the finesse of my father at that party long ago, but his cooking spirit has often visited me. I see echoes of him in my signature un-chicken soup and deep-fried sufganyot-style cupcakes. Pop’s food fearlessness emboldens me to eat adventurously in my travels. When I make challah, I remember his advice to bring ingredients to room temperature for baking. And every year, my community garden plot bursts with inspiration for new dishes.

Rhea Yablon Kennedy has written about food, culture, and sustainability for *The Washington Post’s On Faith blog, Washington Jewish Week, Examiner.com, and Edible Chesapeake magazine. Rhea lives in Washington, D.C., where she teaches at Gallaudet University and grows more vegetables than she can eat.*