Matzobraü: The Beer of Affliction 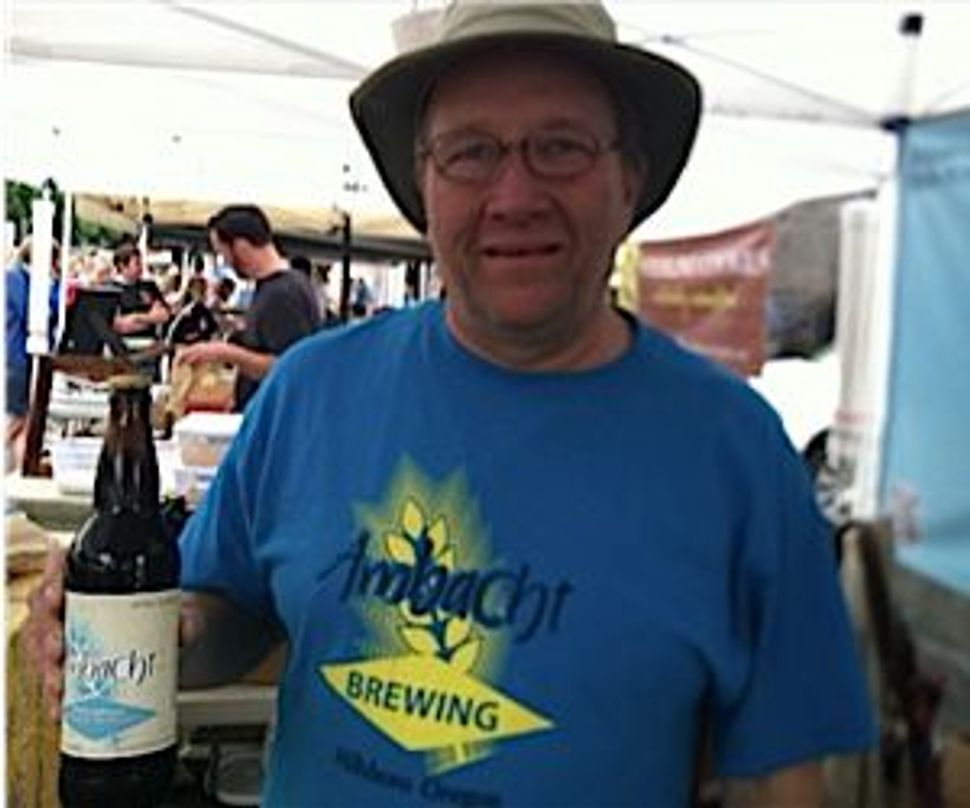 In preparation for Passover each spring, Jews stock their cupboards with matzo, observing the Biblical injunction to abstain from leavened food for eight days.

And when the holiday ends, a box or two of matzo is usually pushed to the back of the pantry or tossed out with the trash. After all, it’s nearly impossible to end Passover without some extra matzo — and what use is there for the bread of affliction once you’re back to eating bagels?

Tom Kramer of Ambacht Brewery, a Belgian-inspired artisanal microbrewery in Hillsboro, Oregon, has the answer. Ambacht’s Matzobraü is a sweet, complex beer with a rare seasonal ingredient: leftover matzo from the local Jewish community.

The idea began in Kramer’s home-brewing days, when he tossed his household’s leftover ground-up matzo in a five-gallon batch of beer, and liked what he tasted.

After he founded Ambacht Brewery in 2009, Kramer began inviting contributions of Passover leftovers from other Jewish Oregonians. “We thought we would get a little community involvement,” he says, “because we weren’t the only ones with a leftover box or two of matzo.” Thirty pounds of kosher for Passover crackers were donated, and Matzobraü was born.

Kramer shuts down his brewery during Passover (“In making it you have to taste it,” he says). After the holiday, he reopens the brewery with a party, where friends are invited to bring unopened boxes of leftover matzot; plain, whole wheat, spelt and rye are all welcome. (No egg or onion allowed, for obvious reasons).

Though many Pacific Northwest breweries pride themselves on their IPA brews, Ambacht Brewery specializes in Belgian-inspired ales — in fact, the banner above Ambachts’ farmers market stand proclaims them “The Only Oregon Brewery Without an IPA.” Still, in keeping with Portland’s foodie culture, Ambacht’s ales are made with local ingredients whenever possible; local blackberry honey contributes to Matzobraü’s full, tawny sweetness.

Who buys this unusual brew? Kramer says he sees a combination of Jewish beer-drinkers, who are amused by the name or looking to make a friend laugh, and non-Jewish ale aficionados who simply want more after tasting a sample of Matzobraü at a farmers market or a local store.

The taste is medium-dark, complex and sweet. The recipe is based on Ambacht’s dark farmhouse brew, a simple, clean ale Kramer describes as “almost fruity.” In brewer-speak, the matzo acts as an adjunct, an addition that changes the flavor of the beer — think pumpkin spice ale. The wheat flour in matzo adds a distinct layer of flavor above the taste of barley in the dark farmhouse brew, and then enzymes in the barley break down the matzo’s starch, adding some sugar to the taste. “The matzo adds an extra degree of complexity that mellows it out,” says Kramer.

Asked if the brew retains any trace of affliction with the mellowness, the brewer shakes his head, smiling. “I think it actually improves the matzo.”

If you’re wondering if you can serve Matzobraü at your seder, though, the answer is no — at least if not you’re going the traditional route. Just below the beer’s name, the label specifies, “Not Kosher for Passover.”

“The local Chabad rabbi really likes that we put that on the bottle,” says Kramer. “Because we don’t want to confuse people who think, ‘Oh finally, a Passover beer!’”

Looking to taste some Matzobraü? You’ll have to wait til August; this year’s brew was just bottled.

Matzobraü: The Beer of Affliction