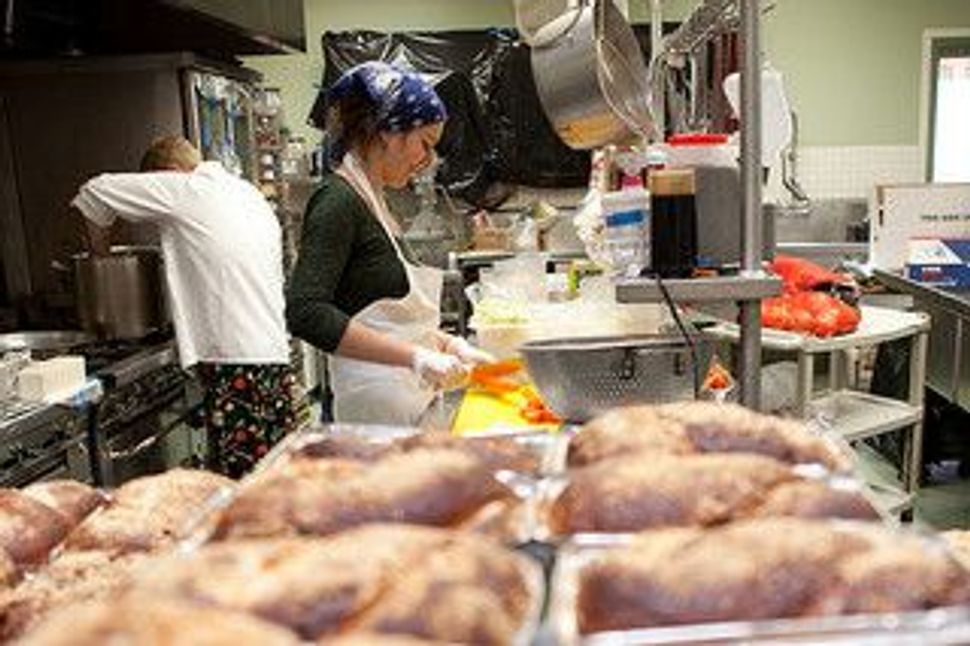 Food plays an important role in Judaism and in the First Narayever community. Food brings people together, connects us, and is an important part of holiday traditions and life cycles.

In 2006 the First Narayever Congregation launched the first Jewish Community Supported Agriculture (CSA) program in Toronto in partnership with Everdale Organic Farm and Environmental Learning Centre. In 2008, we joined Hazon’s world-wide network of Jewish CSAs. This inspired us to look at what more we could do in our community.

The First Narayever’s Sustainable Food Initiative began with a letter. In summer 2009 more than fifty members of the congregation signed a letter requesting that the Board examine the food practices at the shul and propose ways to bring them more closely into line with the Jewish and environmental values supported by the CSA program.

Later that year the shul’s Board of Directors created an ad-hoc committee to study the relationship between contemporary food practices in our community and the Jewish values we espouse at the shul. Over the course of two years the committee met to study food issues together and draft recommendations for the Board.

Two years after the establishment of the ad-hoc committee, the Board of Directors voted unanimously to adopt a new sustainable food initiative. The Board determined that, wherever possible, food served in the shul should be healthy and nutritious, locally-grown, produced in a sustainable, environmentally sensitive manner using fair labour and trade practices and according to a high standard of animal welfare. In addition, the shul agreed to work to reduce the amount of waste involved in preparing and consuming meals and insure that members know what they are eating and where it comes from. With this new initiative, the First Narayever became the first synagogue in Canada, and possibly in North America, to formally adopt an institution-wide sustainable food mandate.

Following that decision, the committee searched for a caterer who shared our values. After a six-month search, one was found and Conscious Kosher Catering was established in tandem with the initiative.

It hasn’t always been easy, and while feedback from the community has been mostly positive, there have been some concerns. Some members have expressed concerns about cost, and although the committee is making every effort to be cost-conscious, sustainable food does cost more. The congregation is still debating how to best absorb those costs. It also takes time for people to adjust to new or unfamiliar foods. Because the process is new to us, we learn from the feedback.

We are pleased to have the support of Nigel Savage, Hazon’s Executive Director. In March 2012 Nigel wrote us a letter commending our work.“We are impressed by the Food Committee’s commitment to engaging and educating the community, and helping your shul become a real role model in this work,” he said.

We’d like to offer readers of the Jew and the Carrot some guidance for beginning your own initiative.
• Start at home. Walk the talk.
• Get your shul involved in Hazon’s CSA program.
• Get a group of members together to attend one of Hazon’s food conferences.
• Get a few people who are passionate about the topic to form a committee or working group.
• Talk to your community.
• Discuss your community’s values where it comes to food and sustainability.
• Take it to your board of directors.
• Read! While studying food issues our committee meetings often felt like book club meetings. We read books such as Michael Pollan’s An Omnivore’s Dilemma and the documentary Food Inc.
• Hazon has many food-based educational resources online. Download the Food Guide and complete the Food Audit.
• Watch and distribute related TED Talks.
• Screen related films at your shul. Google “food documentaries” for a number of “best of” lists to get you started. You’ll also find free documentaries online.
• Don’t expect an overnight success or 100% support. People are resistant to change.

The Narayever’s Sustainable Food Initiative has been a great learning opportunity for us, and it’s been exciting to steer and witness the change. We wish you luck if you choose to follow a similar path.

Andrea Toole is a member of First Narayever Synagogue’s Food Committee & CSA Committee, and is co-founder of Makom: Creative Downtown Judaism. She is a freelance writer, a long time reader of The Jew and the Carrot and writes the food blog, Andrea the Gastronaut.