Your Hummus Now Comes in a Cone 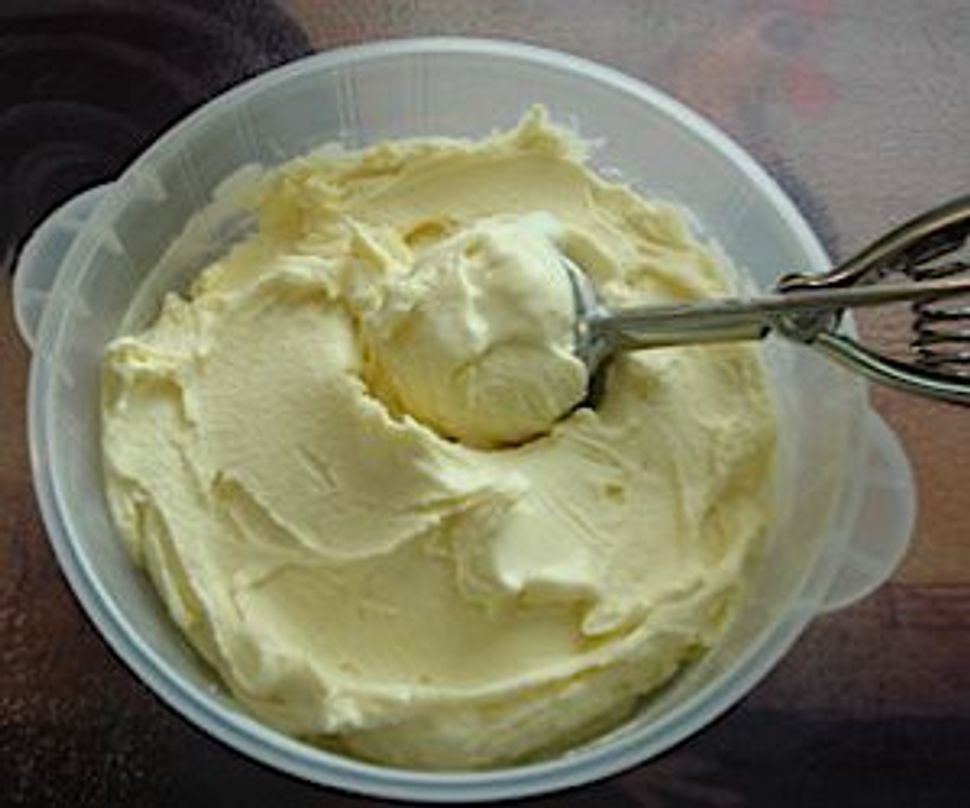 Israelis love their hummus. It is a nation of Zohans who have no qualms eating it three times a day and any time in between.

But when I told my Israeli friends I wanted to try hummus ice cream they looked perplexed. “Hummus ice cream? Who would want to eat that?” or “That sounds disgusting. I’ve never heard of such a flavor!” my friends declared. Despite their intense fondness for hummus, Israelis are traditionalist and want their hummus doused with fruity olive oil and sprinkled with pine nuts, not perched on top of an ice cream cone. They love the idea of tehina ice cream “It’s like halva. It makes sense,” a friend told me. On the other hand, almost everyone I spoke to dismissed chickpea ice cream as a tourist gimmick.

Well, perhaps they’re right. For a brief time this chickpea gelato grabbed some attention from the media. ABC news featured an article about this new-fangled flavor from Lagenda, an ice cream parlor in Yaffo. “It’s tasty but not more than that” was the verdict of one taster. Despite the attention, it didn’t garner enough interest with the locals. With a rare show of solidarity, patrons continued to stream to the hummusias (cafes that specialize in hummus) to get their hummus fix.

By the time I wandered around Tel Aviv looking for this odd ball scoop there was none to be found. “Yeah, we sold it for a while” said one ice cream vendor from the gelaterie Shaked in Tel Aviv “but we’re always adding new flavors”. The latest craze? Bright blue Smurf ice cream with the lingering taste of bubble gum. I even called my neighbor who works at Lagenda to see if he could snag me a sample. “We did that already, perhaps we’ll make it again soon….” was his vague answer. Hummus ice cream, it seems, is already out of fashion.

Theoretically, hummus ice cream should have become a winning combination. For one, Israelis have become enamored with Italy’s gelato culture and have assimilated it as their own. New establishments have sprouted throughout the country and offer continual rotation of classic and imaginative combinations — rose water lychee, raspberry chocolate, mint orange, tiramisu, limoncello..… In the sweltering Middle Eastern heat, the new mixologists are not in the bars or cocktail lounges but at the corner ice cream shop.

So, why isn’t hummus ice cream more widely accepted? For most Israelis and those in the Levant, the savory chickpea experience has been ingrained since childhood. It is a pillar of their culinary tradition and not so easily changed. However, farther east, this popular legume is an integral ingredient in many desserts. In Iran chickpea flour is used for baking cookies and in India it is found in puddings and halva (called barfi) recipes. However, when I asked my friend, an immigrant from Iran who has lived in Israel for ten years, what she thought of hummus ice cream she had only one thing to say “yuck.”

I won’t take their word on it and still plan on the ultimate hummus sundae as soon as the flavor returns. Topped with pine nuts of course.

Your Hummus Now Comes in a Cone