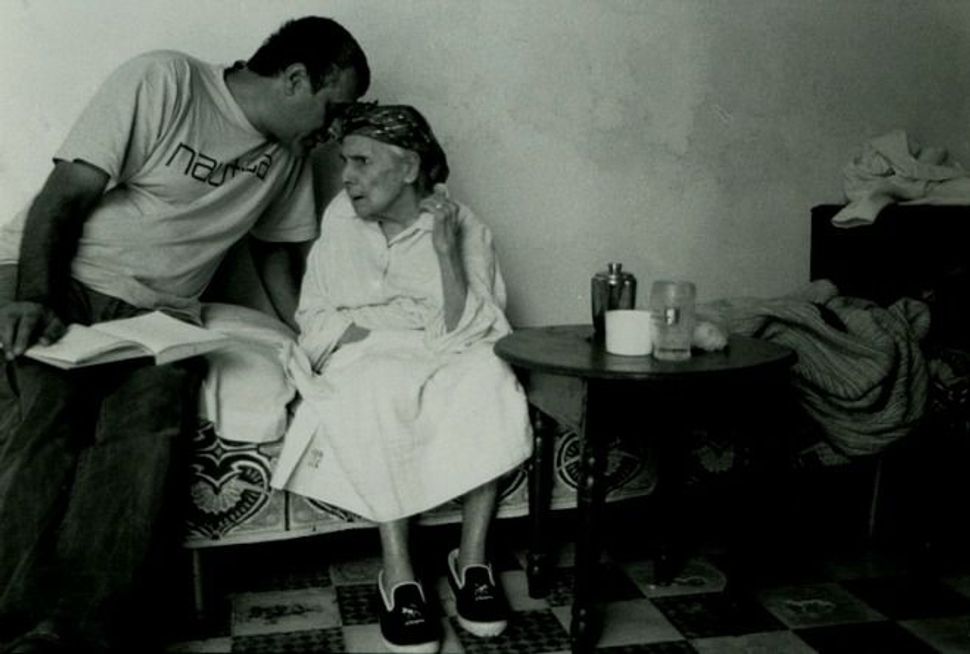 About a year and a half ago, I had a cold. My itchy eyes were constantly tearing, my nose was both raw and runny at the same time. For someone who rarely gets sick and takes over the counter drugs on even rarer occasions it was a particularly out of body experience. I contracted this insufferable cold in December of 2010 while I was WWOOFing in Israel during my winter break at Hebrew University. I was staying in a quaint Moroccan moshav called Te’enim, where I learned how to cook delicious food and was offered a hand in marriage by just about every man who lived there. In this Salach Shabbati-eque town, I volunteered with a man whom I believe is one of Israel’s best kept secrets: Nissim Krispil.

Nissim is one of Israel’s leading herbalists (which explains his incredible immune system) and has written more than a dozen books about Israel’s foliage. He has a fascinating anthropological approach to Israel’s plants and their healing properties, and his incredible talent with a camera makes his books let your mind race in day dreams. Nissim is well over six feet tall, and yet as graceful as the blossoming plants which he studies. His skin is the color of afternoon coffee, leathery from spending years outside in the heat of the Moroccan and Israeli desert land. His voice, like an Israeli radio host, is comforting and familiar, even if you have never spoken a word to him in your life. Apart from giving me the worst cold I have ever contracted, Nissim started me on a path of fascination with the healing properties of flora, from Yemenite etrogs to wormwood to lemon verbena. This is Nissim’s story:

Born in the coastal Moroccan town of Mogador during the late 1940’s, much of the inspiration for Nissim’s later research was inculcated in him at a young age as he watched the interactions between Jews and Arabs that existed in his hometown. In this town, the Jewish community was poor but well-known and respected. At age 5, Nissim’s family made aliyah to a small town in Migdal HaEmek where many Morrocan olim started off. Alongside his nine brothers and sisters, Nissim spent much of his childhood outside playing in the fields of abandoned Arab farms filled with sabra cacti and date trees.

In 8th grade, Nissim took his love of the outdoors to the classroom, and he began high school at an agricultural school in a youth village near Haifa. He studied there until he was drafted into the army, where he was lucky to take a position that allowed him to continue with his passion. Nissim spent his army service as a guide and surveyor of Israel, and continued this position even after his mandatory three year service ended.

From there, he went moved to Har Gilo to work for the Society for the Protection of Nature. For 15 years, he worked as a park guard and guide for trips, where he would guide soldiers and tourists alike around Israel’s landscape pointing out where to find wild asparagus and telling stories about the plants from the Bible. At the same time, he began research on medicinal desert plants. At the insistence of the people he guided, he turned his findings into a book. He interviewed close to 300 tribal peoples including Bedouins and Arabs and which led the formation of the first three volumes of Nissim’s encyclopedia, Yalkut HaTzmeachim, or Anthology of Plants.

Nissim believes that like people, plants have their own unique identity and we have to learn how to utilize it just as we learn to utilize an individual’s potential. Over the next ten years, Nissim worked late into the cool desert nights to complete his encyclopedia, which is five volumes in total. Each entry includes the typical information found in the encyclopedia, as well as its oral history and source in Jewish texts if applicable. Compiling an encyclopedia didn’t drive Nissim into retirement as it might for others, it inspired him to explore his roots. As a fourth-generation American and Ashkenazi to the core, Nissim taught me about the different traditions that have been passed down in his community. While my grandparent’s generation were getting started on frozen dinners and fast food, Nissim’s was still reaping the benefits of the land—not only eating what it had to offer, but using it for medicinal purposes as well. Their knowledge of Jewish penicillin goes well beyond chicken soup.

Around the time he finished the encyclopedia, he opened the Moroccan house—a breathtaking tzimer (guest house) that feels like a Moroccan palace.[Even if you don’t speak Hebrew, be sure to check out these pictures!] I had the incredible opportunity to spend some time in this tzimer, and from the kitchen where I learned to make amazing, authentic Moroccan food, I watched couples celebrate milestone anniversaries and girls my own age celebrate their engagements. If you are looking for a new or authentic way to experience Israel apart from your favorite falafel joint, you should be sure to check this out. While running this business, Nissim continues to do research; interviewing locals and extracting their knowledge about regional plants. Every time he discovered a new plant, he would go straight to his mom (like all good Jewish boys) only to discover that she already knew volumes about it.

Unfortunately, when the first intifada struck, the tension that escalated between Jews and Arabs made Nissim’s research too dangerous and risky. He left Israel and travelled back to his original home, Morocco, where he interview locals about Jewish-Arab relations. He compiled his findings into two books, complete with authentic stories and incredible photographs. Nissim has since returned to Israel, and continues to interview Moroccans who have made their way to Israel.

Nissim went on to write 12 books in total, some of which are more concise versions of his encyclopedia and others about spices. In the interview, he told me that he does “holy work”. He does something that no one else does; he takes a camera and interviews raisin-like immigrants about their stories. Nissim now travels around the world asking people their story, researching people and plants. Take a look at his photos, read his books, and I’m sure you will find Nissim as contagious as I did.

Here are Nissim’s tips on how to make the perfect cup of tea for curing a cold, using one of Israel’s perennial plants: Judean Wormwood. 1) Steep for no more than 5 minutes
2) Drink one cup 3 times a day, but don’t drink too much or you will be sick!
3) This tea tastes a little bitter, it is commonly used in Chinese cooking where they use all 5 taste buds. Don’t let it discourage you!

Daydreaming about Israel? Join us on the 2012 Arava Institute Hazon Israel Ride

Liz Traison is a recent graduate of the University of Michigan and holds a B.A. in History and Judaic Studies. She also attended Midreshet Lindenbaum and Hebrew University. She is incredibly excited about being the newest Program Fellow at Hazon She enjoys reading, cooking, and being outside-particularly on Skeleton Lake.