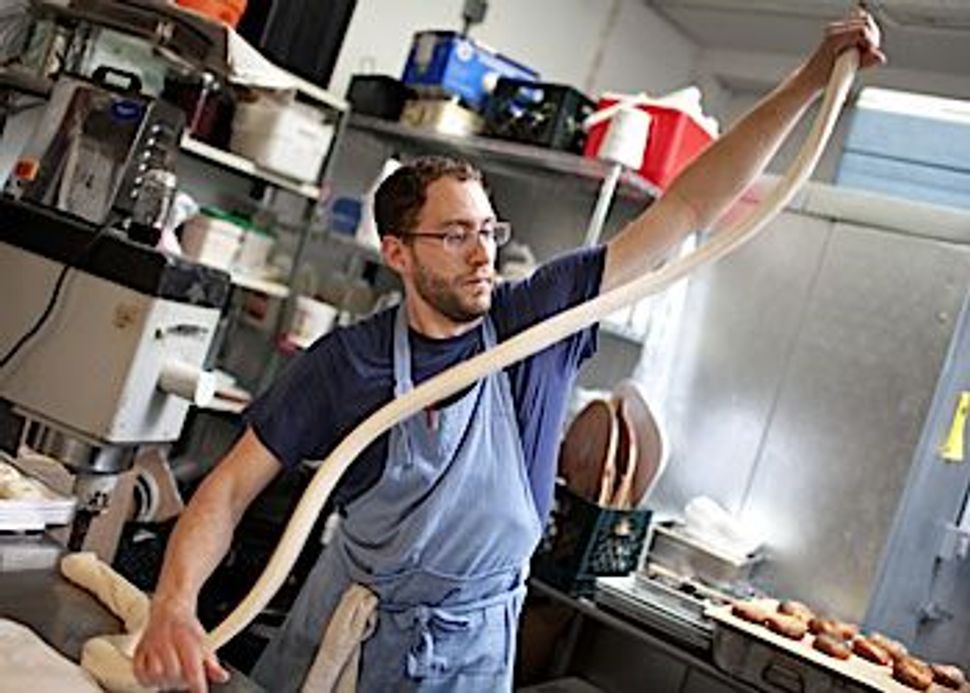 Are we now ready for “The Science of Bagels”?

Dan Graf is. While the 27-year-old resident of Oakland, Calif., hasn’t written a book (yet), he definitely is trying to re-write the predominantly steamed, bready and flavorless history of bagels in the San Francisco Bay Area.

And he’s doing it with science.

Graf is the founder and so far the sole employee of Baron Baking, which has been operating in earnest for about seven weeks. Most of Graf’s business is with 26-year-old Saul’s Delicatessen in Berkeley, which jettisoned a relationship with a local upstart Montreal-style bagel baker in favor of Graf’s more traditional New York-leaning style. He is also supplying two other local eateries.

Scientifically speaking, Graf feels he has engineered the perfect bagel. Nine months ago, when he was an unemployed former Saul’s Deli cook, he set up a laboratory kitchen in his apartment and began trying to craft the kind of bagels he remembered from his youth in New Jersey.

Sure, he used the trial-and-error method, but mainly he scoured old cookbooks, online forums and scientific analyses of baking. Graf, who studied civil engineering and genetics in college, isolated the five qualities he wanted in a bagel — including a very crispy crust and a super chewy interior — and set about researching how to achieve them. “I went back to what bagels were in the 20s, 30s and 40s, when they were boiled in lye water, like pretzels,” he said. When a batch went wrong, he analyzed things from a chemical perspective rather than rushing to find a different recipe.

After about 30 or 40 different variations over the course of nine months, he finally achieved the qualities he was looking for: a thin, dark, extremely crunchy crust; an interior so chewy that if you take too big of a bite, your jaw is going to get sore from chewing; and a deep, rich flavor (although I’d say the flavor of his plain bagel is more French baguette than heavy barley malt).

Ever the scientist, Graf is still perfecting his recipe — and his consistency. I’ve tried his products three different times over a three-week span, and each sample was different. The latest test, last Tuesday, was definitely the best, with Graf assuring it was “exactly what I’m aiming for producing every day.”

Regardless of whether this is the be-all and end-all bagel, the press has been eating it up. Wired’s business section recently had an article headlined “The Perfect Bagel Is Engineered in California.” GrubStreet.com hailed “Oakland Baker Now Making the Perfect New York Bagel.” And the East Bay Express published “The Science Behind Baron Baking’s Perfect Bagel.”

The pieces all tell a similar story, how Graf, rather than heading to New York to learn the bagel-making craft at the foot of the masters, instead dissected the texts of acclaimed baker Peter Reinhart and hooked into the six-volume molecular gastronomy cookbook “Modernist Cuisine” that came out last year.

Graf’s creations take about 36 hours from start to finish. He uses a long, double-stage fermentation process to add flavor complexity. His other main technique is boiling the bagels in water that includes a smidgeon of lye — at a safe level, of course. This is how he gets them crumbs-in-your-lap crispy.

Graf is starting mostly with traditional flavors, but he’s working on a pumpernickel and maybe a cinnamon-raisin. He’s also working on finding a bigger space than the commercial kitchen he is currently using.

While Graf isn’t Jewish, he did grow up “immersed in Jewish culture” in New Jersey. And he loved eating bagels. And though the New York bagel was his starting point, what he has crafted is “totally unique — well, to me at least, and definitely to the Bay Area.”

Ah, the Bay Area, long a bagel wasteland. But not anymore. With Brooklyn-style bagels from ballyhooed start-up Schmendricks in San Francisco, a Cali-N.Y. hybrid from the Authentic Bagel Company in Oakland, Montreal-style bagel baker Beauty’s Bagel Shop about to open its own appetizing shop in Oakland, and Graf’s bagels hitting their stride, slowly taking off, the Bay Area finally has some bagels to yodel about.