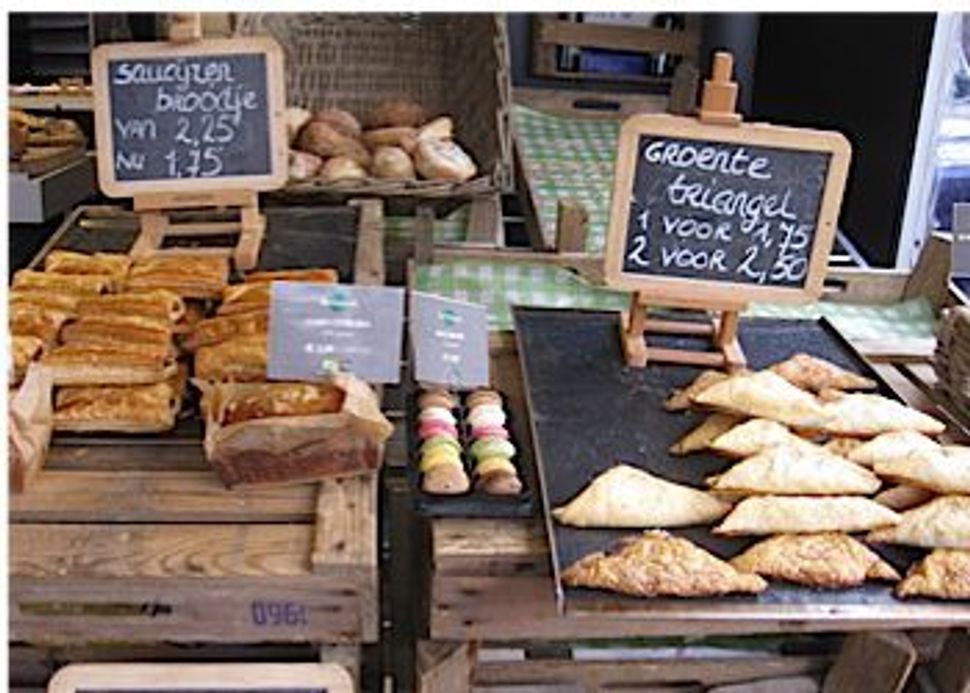 It took me a while to feel acclimated and comfortable in Amsterdam, the city where I studied abroad. Riding my bicycle along those too-worn streets was terrifying at first—surrounded by spinning cars and fast-talking people who smiled with wide wide teeth. Everywhere I went, there was meat and French fries and eight different kinds of yogurt, but never any leafy greens or seitan skewers to roll around on my tongue. Everything about it was both strange and familiar — and the two twisted together constantly. An odd combination of competing realities, each one struggling to declare dominance over the other.

I had never imagined that the Shabbas dinners of my childhood would play a role in my 20-year-old life overseas. And yet, my Friday afternoons always took me to the city’s outdoor markets and ended in my cramped apartment’s communal kitchen — with sweat jewels adorning my upper lip and tomato seeds lining my inner arms. Within the whirl, of cobblestones and beer mugs, this became my oasis.

My first introduction to Amsterdam’s open-air markets was by chance: biking home from class with a friend, seduced by the smells of dough sizzling in butter and the guttural sounds of Dutch soaked air-waves. Upon further inspection, we found the Dappermarkt — a bustling, colorful place spread over the course of about five city blocks, with stalls straddling the roads on either side. We strolled through tents filled with big blocks of cheese, scandalously printed leggings, and richly advertised herring-and-pickle sandwiches. Biking home that third week with my 2 euro bike-bag full of avocados, peppers, and a pound of onions was the cheapest joy I had felt since arriving.

It only took a week or so before my friends and I decided to set our sights higher than the average Tuesday night stir-fry and cook a Shabbas dinner.

I’m not sure why we did — I hadn’t celebrated Shabbas in over a year, and my friend Kyle wasn’t even Jewish. Our friend Becca came from a spiritual background. I think it was her fondness for connection and meaning that pushed me into it, into remembering the warmth I used to feel as a kid as I watched my mom’s hands float over lit candles, and for the strange yearning to re-create it.

The first dinner was an experiment, we bought some vegetables, and all promised each other we would go out afterwards. Just a quick dinner, we said. Three hours later, we found ourselves still at the kitchen table, then gently drifting to the couches around midnight, and then eating nutella and bananas on Kyle’s floor around 2 am. We didn’t make it out that night. And then, Shabbat dinners became a ritual of ours.

We would cycle to the market on Friday afternoons, our pockets stuffed with canvas bags, and load up on snap peas, mushrooms, and fat tomatoes. I bought my vegetables from a wild-eyed Dutch woman, who spoke rapid gibberish at me as I would point to the piles of sweet potatoes behind her with three fingers held up. “Drie potaten, astublief (three potatoes, please).” A half-loaf of freshly-made bread went for a euro, and this was good, fresh, preservative-free bread that was thick with grains and seeds, and would go moldy within three days if it wasn’t eaten. The next stop was cheese. Surrounded by blocks and wedges of the most delicious cheeses, we usually settled upon goat milk gouda — creamy and pearl-white, it is thick and pungent on your fingers and tongue. The type of dairy that forces addiction.

A quick stop for 3-euro wine, and then the cooking would begin.

We shared a communal kitchen with three Asian girls down the hall, who spent most of their time cutting vegetables into unusual shapes and boiling them in spiced water with thick pieces of beef. And there was Matteo, a burly Italian from Milan, who walked around in his underwear carrying a wooden spoon and making kissing sounds with his fingers.

No matter what we had on hand — whether it be rice or pasta, pesto sauce or tomatoes, we somehow always ended up with all of our ingredients in what-could-pass-for-a-wok on a low flame, sautéing merrily in a small pool of oil. And though it was the same menu that we made most nights, Shabbas dinner always felt remarkably different.

Maybe it was because we would all stand together before serving the food, holding hands and whispering to ourselves over the lit 1 euro candle. Maybe it was because I would tie my hair around my chin while conducting the improvised Kiddush, so that I looked like a bearded Rabbi. Maybe it was simply because taking the time to bless the bread, look at each other in silence across the table, pour wine as a family, and have our food illuminated by a dancing candle caused us to be more present in the moments that we were going through.

In a place teaming with newness and canals and high-speed bicycles, where we all struggled, each in our own way, with how to make this whole experience of living abroad meaningful and important, Shabbas dinners played a huge role. They felt raw and special — something about enacting rituals, sort of like putting on a play, that infused us with a sense of intention and vulnerability.

Or, as Kyle likes to surmise, “that shit was real.”

Note: The Stir-Fry works best with three sets of hands. I recommend cooking it with friends, it is the perfect way to spend time together cooking, stirring, cutting, laughing, and tasting.

Two pans and a pot

2) Cut the chicken. Prepare a second pan over a medium flame, drizzle in a bisel of oil, and throw in the chicken. (As a college student, cooking chicken is terrifying, so I will include a really easy guide to know when it is safe to take a salmonella-free bite: cook until all the red/pinkness has gone away, and the chicken looks wrinkled and white. Make sure you open a piece up, with a knife or fork, to investigate whether the inside is white as well. Remember: white equals right!)

4) After letting the Brussels sprouts and onions brown (10 minutes or so), throw in the broccoli, peppers, zucchini, and mushrooms. Pour a leisurely amount of balsamic vinegar over the veggies, and then sprinkle with a pinch of each spice (black pepper included). Sporadically prod at the produce with your spatula.

5) Meanwhile, boil 2 cups of water with a dash of salt. When the water is boiled, throw in the pasta and let it cook for 7- 9 minutes. (Be very exacting with this, as Matteo says: you Americans, and your soggy pasta!) Fish out a piece of pasta to see if it is the perfect degree of al dente. If so, toss the pasta into a colander, and then put it back in its pot.

6) Turn your attention back to the vegetables. As they begin to look cooked, get ready for the No Fail Secret Ingredient: an egg. Crack an egg into the stir-fry and mix it around with your spatula.

7) When the egg has cooked, stir in the chicken. Add a bit more balsamic vinegar and a touch of paprika as they all purr merrily in the pan. Then pour the vegetable-chicken sauce mixture into the pot with the pasta. Stir over a low flame for two or three minutes.

8) Transfer with big spoon onto plates. Add salt and pepper at will.