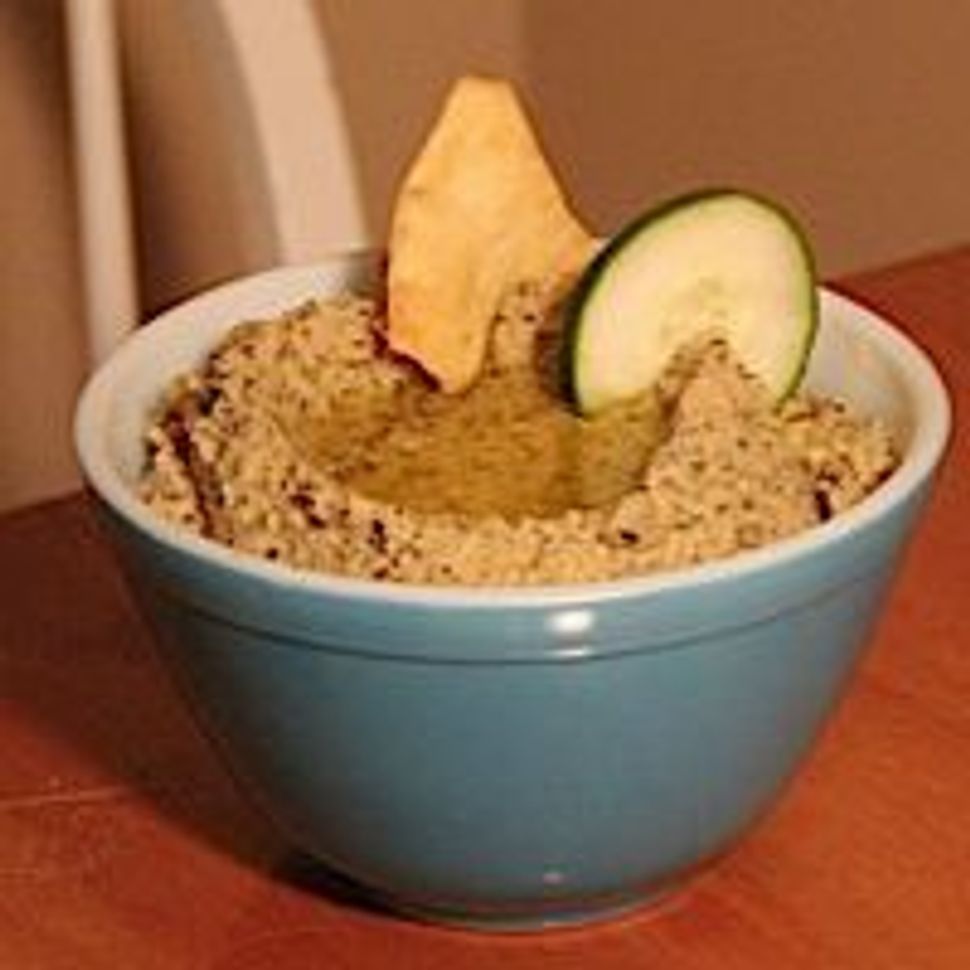 Image by David A. M. Wilensky

In my experience, there’s often a token non-Jew at Friday night dinner or at the Seder — the Shabbos Goy or the Passover Goy, some call them (affectionately).

Last Friday, however, I experienced the unfamiliar sensation of being the Shabbos Jew at a Friday night dinner with several Catholic friends. And when I call them Catholic, understand what I mean: One is a seminarian in Rome and another is a playwright studying at Catholic University – and our host for the evening, Sarah, has a degree from the Pontifical John Paul II Institute for Studies on Marriage and Family.

I’ve gotten used to feeling the Shabbos spirit at Friday night dinners with eclectic companions. (And my roommates — a lesbian lapsed Catholic and a Puerto Rican lapsed Pentecostal — have gotten used to things like knishes and kasha varnishkes.) Even so, this meal was a mish-mash of cultures — in the company and in the food served.

Sarah’s menu started with a novel, if unexpectedly good, hummus. Flavored hummus is gimmicky, rarely passing the would-I-be-caught-dead-eating-this-in-public test, but this homemade, surprisingly simple concoction blew me away. Made with black olives, it had the light, fresh taste of hummus with the salty edge of tapenade. The meal marched on with a salad involving poached peaches and creamy vinaigrette and a chicken paella. At this point, the menu was deemed “a very Sarah menu” by everyone — except me. I said it seemed normal to me, but quickly realized it only seemed normal because so many of the Shabbat meals I attend take place in the homes of liberal Jewish yuppies who delight in diverse dishes, cobbled together from many culinary traditions. “Did you just compare me to a liberal, urban Jew?” Sarah said, with mock offense. I meant it as a compliment, Sarah, I promise! (Readers, temper yourselves; I’d respond with the same mock offense if Sarah compared me to a conservative Catholic.)

Later, we also noted that I was talking loudly, and I said I noticed no one but me had their elbows planted on the table. These things, too, we attributed to my being the only Jew present. In spite of it all, the whole meal had a certain unidentifiable ambiance of… was it… Jewishness?

Perhaps the evening’s Jewish atmosphere came from the discussion of the finer points of Catholic rules about when meat is allowed. It was downright halachic.

The main course was chicken paella. She wanted to make the paella with shrimp or pork, but refrained because she couldn’t remember my level of kashrut.

Normally, of course, Catholics as devout as these still refrain from meat on Fridays year- round, including chicken (even though the no-meat-on-Fridays rule was limited to Lent by Vatican II). But it was the feast day of Saint Apollinaris of Ravenna, a sword-toting martyr of the early church whose patronages include epilepsy, gout and assorted regions of Italy and Germany. In light of this, Sarah assured all assembled that Jesus would understand about the chicken.

And then there was dessert. “This is no-bake chocolate cake,” Sarah announced.

“In my family, we call this kind of thing Passover pie,” I observed.

“Because it doesn’t have to rise.”

2 cans of Goya low sodium chickpeas (Why Goya? According to Sarah, they give to Catholic charities, they use fresh ingredients and “you don’t feel like you have to bathe afterwards”)
1 can of black olives, pitted
5 cloves of garlic, peeled, with the ends cuts off
Olive oil
Salt to taste

1) Combine the chickpeas, olives and garlic in a food processor.

2) Add olive oil as you go to taste and to keep things moving smoothly in the food processor.

3) It will be ready when the usual beige of hummus is marbled with a deep blue-and- purple-ish color from the olives. Visible flecks of black olive will remain, but the overall texture should be pretty smooth.

4) Serve with pita chips and slices of cucumber to dip.

5) To fancy it up: Once it’s in the serving dish, place 1 whole chickpea, 1 whole olive and a pool of olive oil in a small depression in the top of the hummus.

*David A.M. Wilensky is the executive director of the Jewish Student Press Service and the editor in chief of New Voices Magazine. His personal blog is *